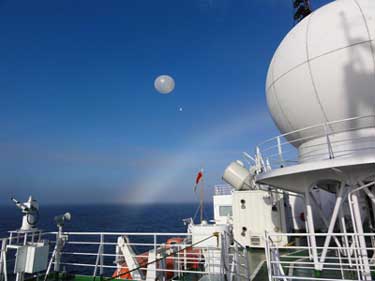 The current reduction in Arctic sea-ice extent causes unpredictable weather phenomena in the Arctic Ocean (strong winds, high waves, and rapid sea-ice movement associated with cyclones) also over the mid-latitudes (heat waves, severe winters, etc.). With such changing background conditions, more accurate weather forecasts are needed to safely navigate along the Northern Sea Route (NSR) and to understand the climatic linkage between the Arctic and the mid-latitudes. However, this is difficult because of the sparse number of atmospheric observations across the Arctic Ocean. As it is highly difficult to make additional observations in Arctic regions because of limited logistical support, a cost-benefit optimized Arctic observing network is required for improving polar predictions.

In September 2013, Dr. Jun Inoue from the National Institute of Polar Research (NIPR), Japan, and his international research team conducted joint Arctic atmospheric observations using radiosondes (instruments carried into the atmosphere by weather balloons, which measure various atmospheric parameters) on the research vessel Mirai and at meteorological stations surrounding the Arctic Ocean (Ny-Alesund, Alert, and Eureka). The team launched radiosondes eight times a day from RV Mirai (operated by NIPR and the Japan Agency for Marine-Earth Science and Technology (JAMSTEC)), six times a day from Ny-Alesund (operated by the Alfred Wegener Institute), and four times a day from Alert and Eureka (operated by Environment Canada). Their high daily observing frequency improved the accuracy of atmospheric data used to estimate the state of the climate and weather forecasts because much of the observed data were incorporated into the initial conditions of the weather simulations in real time.

To investigate the impact of these special observations on the weather forecasts over the Arctic, the research team focused on a high-pressure system along the NSR on September 20, 2013 that caused strong coastal winds and rapid wind-driven sea-ice drift over the NSR. They incorporated multiple observations into the initial conditions of the weather simulations, including these special data and conducted ensemble forecasting experiments with an atmospheric general circulation model. The influence of the special observational data on the predictability of the high-pressure system was then tested using the different initial fields by excluding these special data from each station separately. It was found that the uncertainty in the modeled wind fields associated with the high-pressure system was reduced when all the radiosonde data was included. In particular, the data from Ny-Alesund and RV Mirai were very important for predicting this event, partly because of the flow-dependent characteristics in the upper atmosphere. Based on several sets of sensitivity tests, they also determined that four launches per day, once every six hours, is the most cost-effective observing frequency.

The research team concluded that additional atmospheric observations would effectively predict not only severe weather phenomena over the Arctic Ocean but also sea-ice distribution influenced by atmospheric forcing. During the Year of Polar Prediction (YOPP), from mid-2017 to mid-2019, proposed by the World Weather Research Programme -- Polar Prediction Project (WWRP -- PPP), these types of observations and modeling activities will be accelerated within the international framework and could contribute to establishing a sustainable Arctic observing network.