The Gulf of Mexico shows a number of interesting oceanic features. The Loop Current for example enters the Gulf by the strait between the Yucatan Peninsula and Cuba, and makes a loop that goes more or less deep. Sometimes, this loop breaks, and forms a lone eddy (or ring). This can have real impact, especially on hurricane intensification, and on navigation. Moreover, the Gulf of Mexico is an oil exploration area, that oceanic perturbations like these eddies can seriously disorganize, or even make hazardous. 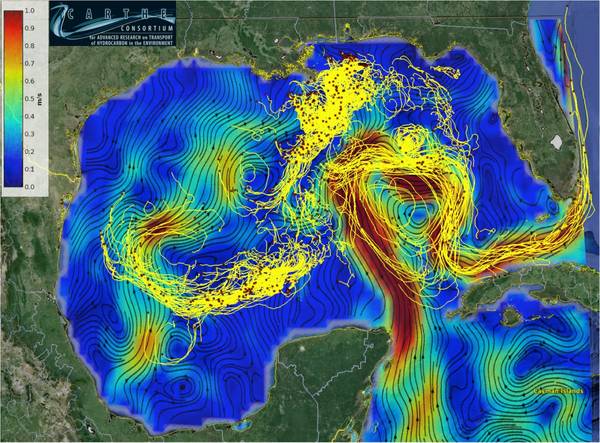 AVISO: Image of the Month – April 2016Trajectories of the LASER expedition drifters in the Gulf of Mexico superimposed on surface currents. The red squares mark drifters positions on 9 March 2016 and the tails are 14 days long. Surface speed field was derived from sea level anomalies and Ekman drift corresponding to 9 March 2016. (Credit University of Miami (Edward Ryan/Tamay Ozgokmen))

During January 15 - February 15, 2016, a large coordinated expedition in the Gulf of Mexico, denoted LASER - LAgrangian Submesoscale ExpeRiment was conducted. During this expedition, more than 1000 biodegradable surface drifters have been released and they are being tracked every five minutes, and should last well into April 2016. The expedition was conducted from two ships and at times three aircrafts. The aircrafts measured fine-scale sea-surface temperature (SST) that was used to guide the ships to target drifter deployments in real time. Altimetry and other satellite data were used for experimental planning every day. AirSWOT, the airborne instrument prefigurating SWOT altimeter flew over the drifter array.

The comparison of drifter motion and both satellite and airborne measurements should be quite instructive for scientific purposes. AirSWOT results, compared with drifter paths should help preparing for SWOT high-resolution data over ocean.

The Consortium of Advanced Research for Hydrocarbons in the Environment (CARTHE) a multi-institutional research group, supported by the Gulf of Mexico Research Initiative CARTHE is investigating transport processes in the upper ocean in the aftermath of the 2010 Macondo blowout. It organized the LASER expedition.