Oil-Hungry Bacteria Could Clean Up The Next Big Oil Spill 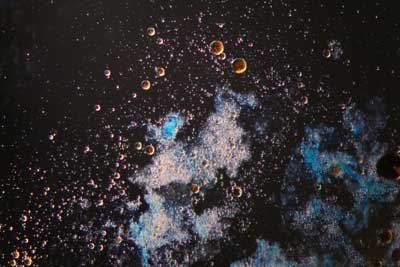 Scientists at Heriot-Watt University have cracked the genetic code of the marine bacteria that helped ‘eat’ the oil spilled from the Deepwater Horizon disaster, information that could aid clean-up efforts for the next major spill.

Dr. Tony Gutierrez was in the US at the time of the disaster and was able to perform experiments with samples from oil-contaminated waters of the Gulf of Mexico shortly after the Deepwater Horizon spill occurred – samples that contained key species of bacteria that fed on the oil.

Experiments with the samples revealed that certain bacteria had thrived on the oil that gushed into the Gulf, by devouring the oil as a preferred food source.

Crude oil droplets dispersed in seawater due to the action of the bacteria, taken from Deepwater Horizon spill site. Credit: Heriot-Watt University

In a paper published on May 9, 2016, in Nature Microbiology, Dr. Gutierrez and his colleagues from the University of Texas and University of North Carolina at Chapel Hill reveal the genetic pathways these bacteria use to consume the oil, what conditions they thrive in, what oil hydrocarbons they can eat, and how they work in concert during an oil spill.

“Oil is a very complex fluid that contains thousands of different types of hydrocarbon chemicals, many of which are toxic and difficult to break down. But some of these bacteria can.

Dr. Tony Gutierrez, an Associate Professor of Microbiology at Heriot-Watt University, said, “Understanding which bacteria are important to breaking down oil could help lead to the design of emergency response plans that are more effective and environmentally friendly for combatting a major spill.

“We knew that certain bacteria will respond to and thrive during an oil spill and helped break down oil, but we didn’t know how this was coordinated.

“By reconstructing the genomes of these bacteria, we’ve discovered the pathways they use to breakdown the different types of hydrocarbon chemicals in oil, including some of the highly toxic ones, and the way the bacteria work as a community to degrade the oil.

“Different bacteria have different appetites for different hydrocarbons, but they can work beautifully in concert together to clean up polluted water.”

The findings from this UK and US collaboration also reveal an ability of these bacteria to move towards oil droplets and to use scarce nutrients, suggesting that these microbes are like sentinels in the ocean that are well-adapted to respond quickly to the influx of oil in the event of a spill.

The team also identified the bacteria that work best at different depths in the Gulf during the Deepwater Horizon spill. Oceanospirillales, for example, degraded alkanes in the deepwater oil plume, whereas Rhodospiralles and Cycloclasticus were responsible for degrading polycyclic aromatic hydrocarbons (PAHs), which are recognised as some of the most toxic chemicals in oil.

Dr. Tony Gutierrez said, “Following an oil spill, dispersants are commonly used to break up the oil into very small droplets, making it easier for the bacteria to break it down.

“Our findings show that some of the bacteria that responded to the spill in the Gulf are also able to degrade dispersants, potentially rendering them ineffective after they have done their job.

“Future oil spills are pretty much a certainty. This new information provides evidence that the incredibly diverse bacterial community that is ever present and living in the ocean stands at the ready, like an army of soldiers, to help degrade oil in the event of a spill. The hope is that our findings will allow us to exploit their oil-degrading potential on a wider scale, such as through more effective bioremediation strategies.”

Dr. Gutierrez is currently working to understand the diversity and abilities of oil-degrading bacteria in UK waters where future oil spills might occur, with a view to designing effective bioremediation solutions, including evaluating the effectiveness of using chemical dispersants.