Ocean Supporters and Scripps Scientists Dive into Adventure in Palau 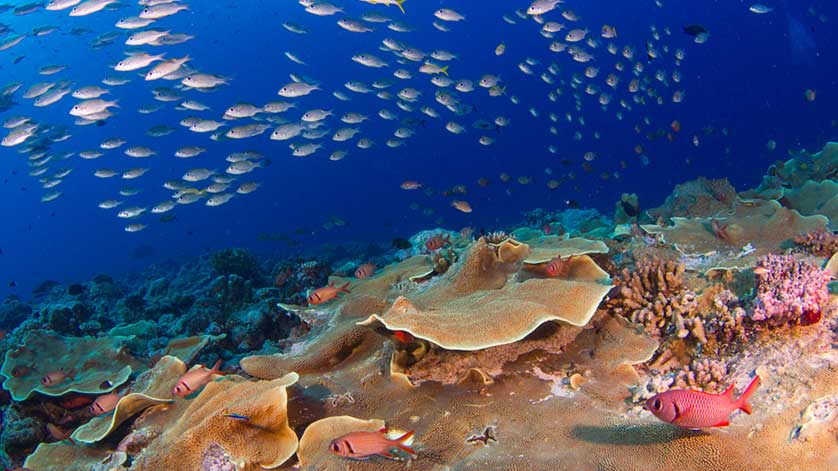 Beneath the serene seas of Palau, the ocean is teeming with marine life. From coral reefs and sharks to tropical fish and sea turtles, the island nation located in the western Pacific Ocean is home to some of the most diverse ecosystems in the world.

This summer, a group of adventurous ocean supporters embarked on a week-long diving and learning experience in Palau led by scientists from Scripps Institution of Oceanography at UC San Diego. Scripps marine ecologists Jennifer Smith and Stuart Sandin, postdoctoral researcher Brian Zgliczynski, and colleagues were visiting the remote island nation to conduct research for the 100 Island Challenge, a Scripps-led project that aims to collect coral reef data from 100 islands across the globe, providing a baseline health assessment for islands ranging from moderately to heavily fished. Researchers will use the data to gain a better understanding of how reefs are adapting to our rapidly changing planet and decipher what the future holds for these important habitats. (View photo gallery.)

The 100 Island Challenge team is particularly interested in studying the coral reefs of Palau because the country has become a global example of effective marine management thanks to conservation efforts implemented by President Tommy Remengesau. The island’s strict marine conservation plan protects 80 percent of Palau’s waters, from nearshore coral reefs all the way to offshore tuna fisheries. 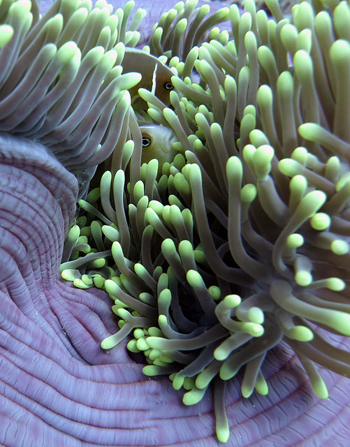 The current budget for the 100 Island Challenge is not large due to the lack of available research grants, and ship access is often very expensive due to the remote locations the researchers visit. However, thanks to the support of nine generous donors, Scripps scientists were able to charter a boat for three weeks to study the coral reefs of Palau’s southwest islands. These Scripps supporters joined the research team onboard during the third and final week for an immersive exploration experience.

“By partnering with this wonderful group of donors, we had two weeks of research and one week of exploration where we were able to show donors the spectacular coral reefs and beautiful marine landscapes of Palau, and also to teach them about conservation in action,” said Sandin, who recently became director of the Scripps Center for Marine Biodiversity and Conservation (CMBC).

Scripps Diving Officer Christian McDonald and the 100 Island Challenge team guided supporters on three to four dives per day and held science talks to discuss issues in marine conservation, ongoing research projects, innovative technology used to study coral reefs, and more. Whether a seasoned scientist, experienced diver, or snorkeler, everyone onboard was wowed by the beauty they witnessed underwater.

The coral reefs of Palau are magical. Every dive there is something that amazes you,” said donor Mary Ann Beyster, producer-director of Yellow Warbler Media and manager of Beyster Ventures and Beyster Family Foundations. “You see hundreds of corals here, and at some dive locations, it is like diving in an underwater English garden with tropical fish, reef sharks, turtles, mantas, and more—a full spectrum of colors, textures, and structures.”

During a reception held on the mainland of Palau, the entire Scripps team including supporters had a chance to connect with Palau community members, elders, high-level government officials, and non-governmental organizations (NGOs) that are working to help manifest conservation and restoration successes across Palau.

“I think Palau is one of the most beautiful places on the planet, both above water and below,” said Smith, who helped launch the 100 Island Challenge more than a decade ago. “During a time when there’s news about how all the coral reefs are doomed, we got this opportunity to show this amazing group of people that, no, that’s actually not true. This place is the most progressive in terms of marine management, and look at their reefs. These reefs have suffered from warming and bleached in the past, but they also have this remarkable capacity to recover.”

A local partner included One Reef, a conservation NGO led by founder and CEO Chris LaFranchi. He joined the Scripps team on their expedition and led discussions onboard about how science is transmitted to guide policy on a local level.

In addition to experiencing world-class diving and education, the donors were thrilled and surprised to meet President Remengesau, who stopped by their boat on the final day of the trip to discuss his environmental policies and thank Scripps for its collaborative research and conservation efforts. He stayed on the boat for nearly two hours and had lively one-on-one conversations with everyone onboard.

“It speaks to the prestige of the Scripps scientists that the President wanted to come aboard and thank them for their work and for their collaboration,” said supporter Elizabeth Oliver.

Oliver said she was left with a feeling of hope after the trip and described her overall experience as “amazing.” She likened the diving in Palau to that of an “underwater Disneyland” or something you might see in an otherworldly film like Avatar.

“There were these drift dives where you would get into these ancient river beds and the current would pull you and you’d just float along with it, and you’d see thousands of different kinds of coral and fish,” said Oliver. “It was almost impossible to take it all in because there was so much biodiversity!”

Beyster also reminisced about the memorable drift dives, where a current of three to four knots carried divers through a channel of 30-foot-high walls of coral. “Have you ever flown with turtles, groupers, and other tropical fish?” asked Beyster. “Me neither, until this trip.”

Scripps Oceanography plans to organize more up-close-and-personal trips in the future where science supporters can connect with action in the field, both at sea and on land. Learn more about supporting Scripps science.