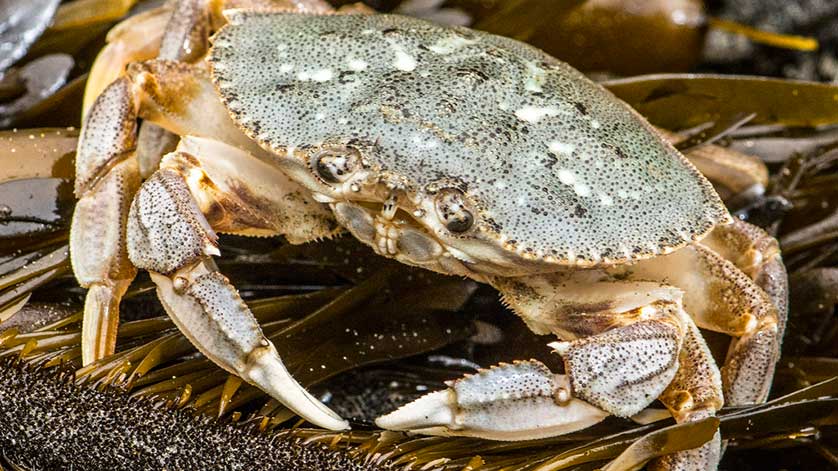 The acidification of the ocean expected as seawater absorbs increasing amounts of carbon dioxide from the atmosphere will reverberate through the West Coast’s marine food web, but not necessarily in the ways you might expect, new research shows.

Dungeness crabs, for example, will likely suffer as their food sources decline. Dungeness crab fisheries valued at about $220 million annually may face a strong downturn over the next 50 years, according to the research published Jan. 12 in the journal Global Change Biology. But pteropods and copepods, tiny marine organisms with shells that are vulnerable to acidification, will likely experience only a slight overall decline because they are prolific enough to offset much of the impact, the study found.

Marine mammals and seabirds are less likely to be affected by ocean acidification, the study found. 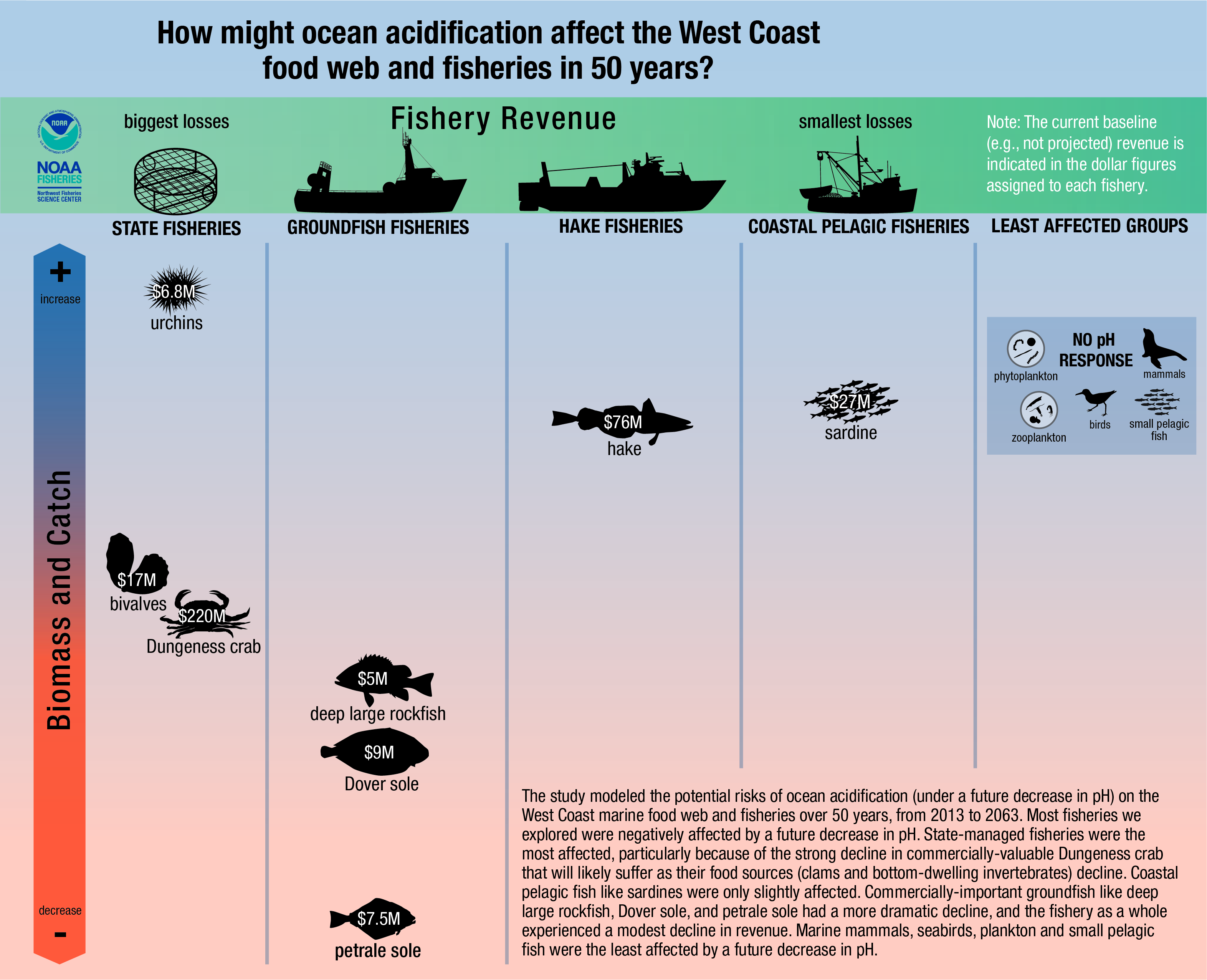 “What stands out is that some groups you’d expect to do poorly don’t necessarily do so badly – that’s probably the most important takeaway here,” said Kristin Marshall, lead author of the study who pursued the research as a postdoctoral researcher at the University of Washington and NOAA Fisheries’ Northwest Fisheries Science Center. “This is a testament in part to the system’s resilience to these projected impacts. That’s sort of the silver lining of what we found.”

While previous studies have examined the vulnerability of particular species to acidification in laboratories, this is among the first to model the effects across an entire ecosystem and estimate the impacts on commercial fisheries.

“The real challenge is to go from experiments on what happens to individual animals in the lab over a matter of weeks, to try to capture the effects on the whole population and understand how vulnerable it really is,” said Isaac Kaplan, a research scientist at NOAA Fisheries’ Northwest Fisheries Science Center in Seattle.

The research used sophisticated models of the California Current ecosystem off the Pacific Coast to assess the impacts of a projected 0.2 unit decline in the pH of seawater in the next 50 years, which equates to a 55 percent increase in acidity. The California Current is considered especially vulnerable to acidification because the upwelling of deep, nutrient-rich water low in pH already influences the West Coast through certain parts of the year.

The ocean absorbs about one-third of carbon dioxide released into the atmosphere from the burning of fossil fuels, which has led to a 0.1 unit drop in pH since the mid-1700s.

The research built on an earlier effort by NOAA scientists Shallin Busch and Paul McElhany that quantified the sensitivity of various species to acidification, as originally reported in 393 separate papers. In a novel approach, Busch and McElhany weighed the evidence for each species based on its reported sensitivity in the laboratory, relevance to the California Current and agreement between studies.

This synthesis by Busch and McElhany identified 10 groups of species with highest vulnerability to acidification. Marshall and colleagues incorporated this into the ecosystem model to examine how acidification will play out in nature. The study particularly examined the effects on commercially important species including Dungeness crab; groundfish such as rockfish, sole and hake; and coastal pelagic fish such as sardines and anchovy over the period from 2013 to 2063.

The study modeled the potential risks of ocean acidification (under a future decrease in pH) on the West Coast marine food web and fisheries over 50 years, from 2013 to 2063.NOAA Fisheries

“This was basically a vulnerability assessment to sharpen our view of where the effects are likely to be the greatest and what we should be most concerned about in terms of how the system will respond,” said Tim Essington, a UW professor of aquatic and fishery sciences and a co-author of the research.

The study provides a foundation for further research into the most affected species, he said.

Although earlier studies have shown that Dungeness crab larvae is vulnerable to acidification, the assessment found that the species declined largely in response to declines in its prey – including bivalves such as clams and other bottom-dwelling invertebrate species.

Since Dungeness crab is one of the most valuable fisheries on the West Coast, its decline would have some of the most severe economic effects, according to the research. Groundfish such as petrale sole, Dover sole and deep-dwelling rockfish are also expected to decline due to acidification, according to the assessment. However, fisheries for those species are much less valuable so the economic impact would not be as large.

“Dungeness crab is a bigger economic story than groundfish,” Kaplan said. “There are winners and losers, but the magnitude of the impact depends on how important the species is economically.”

The research was funded by the NOAA Ocean Acidification Program and the National Centers for Coastal Ocean Science. Marshall was supported by a National Research Council fellowship.