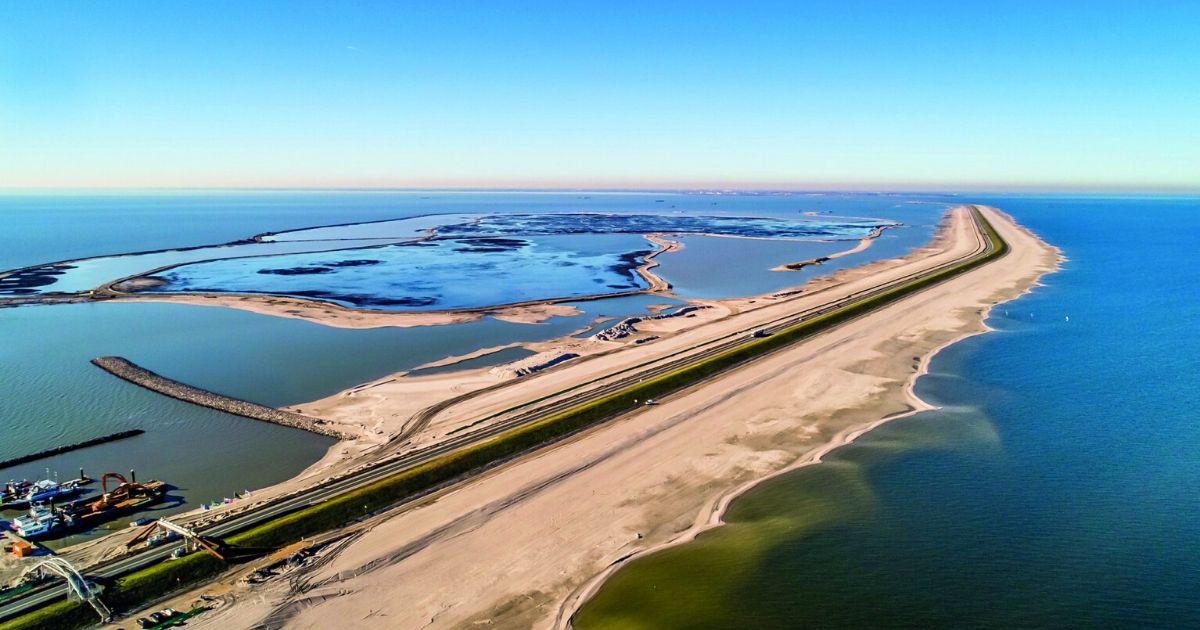 10 million m³ of sand have been deposited around the Houtribdijk levee, protecting infrastructure against waves and nature’s elements. Photo: Frank Janssens/Rijkswaterstaat.

When the Dutch government and research institutions wanted to monitor how waves and currents would affect the pioneering use of artificial sand banks to protect a levee in a non-tidal freshwater system, Nortek was selected to supply key measuring instruments and set up the data telemetry system.

The Houtribdijk is a 25 km long levee, or dike, separating two large artificial lakes, the IJsselmeer and Markermeer. The lakes and accompanying levees protect the Netherlands from the forces of the North Sea’s extreme weather events, and from flooding from inland freshwater river systems.

After years of exposure to the elements, the Houtribdijk was in need of major maintenance. The traditional way to make it more secure would have been to bolster the barrier of rocks and other building materials that already protect the levee from the impact of water during storms. But this time, the authorities decided to try something different.

A nature-based solution for a protective barrier

The authorities decided to opt for a more nature-based solution: the creation of two 140 m wide artificial beaches on either side of the levee, whose sloping contours would improve the protection against waves and the elements. In addition, these beaches would create an attractive and valuable natural habitat for coastal flora and fauna, as well as a new zone for recreational activities.

Some 10 million m³ of sand needed to be deposited around the levee – that’s as much sand as is used to maintain the entire seashore of the Netherlands from erosion in a year. After the reinforcement, the levee should be able to withstand storms with an intensity only likely to occur once in every 10,000 years.

The project is also a world first, because, while such sand-based reinforcement has previously been carried out in coastal defenses against seawater, it has never been used in non-tidal freshwater conditions.

A test area was created in advance, and specialists from the EcoShape knowledge consortium used it to conduct extensive research on how the sand behaves. This knowledge led to the full-scale application of the solution.

Henk Meuldijk, Reinforcement Project Manager at Rijkswaterstaat, reports: “It is really good that measurements were taken at the pilot site for a number of years. We can see that the shape of the sand mass is relatively stable after two years. We have used this knowledge for the construction of the reinforcement as well as for our management and maintenance plan.”

Rijkswaterstaat is part of the Dutch Ministry of Infrastructure and Water Management, and is responsible for the design, construction, management and maintenance of the main infrastructure facilities in the Netherlands.

Meuldijk hopes to deepen the knowledge gained about the reinforcement of the Houtribdijk by means of the research and monitoring program now applied on the full, large-scale, solution, which is no longer a small-scale pilot site. The current research and monitoring program on the full-scale solution is being led by Rijkswaterstaat in collaboration with Delft University of Technology.

“The knowledge that we are gaining here will be very useful in the Netherlands and beyond,” Meuldijk says.

Video: Take a closer look at how the dynamic behavior of the sand in the Houtribdijk reinforcement is being monitored.

The importance of on-site ADCP monitoring

The extent to which desktop modeling can help on such a pioneering project is limited, given the multiple forces at work and the complexities of the feedback between them. If the sand started shifting on test sections of the beach or holes started appearing in it, then the researchers needed to know exactly what forces were at play.

That meant detailed monitoring of the interaction between the water and sand was essential to ensure the defenses were fit for purpose – and it was here that Nortek was able to help.

“With traditional coastal protection works, you only deal with physical problems, such as currents, waves and rock forces. But with these nature-based solutions, you need a much greater degree of monitoring, because the outcomes are much harder to predict and you need to take into account ecological elements like flora and fauna,” explains Sicco Kamminga, Managing Director at Nortek’s subsidiary in the Netherlands. 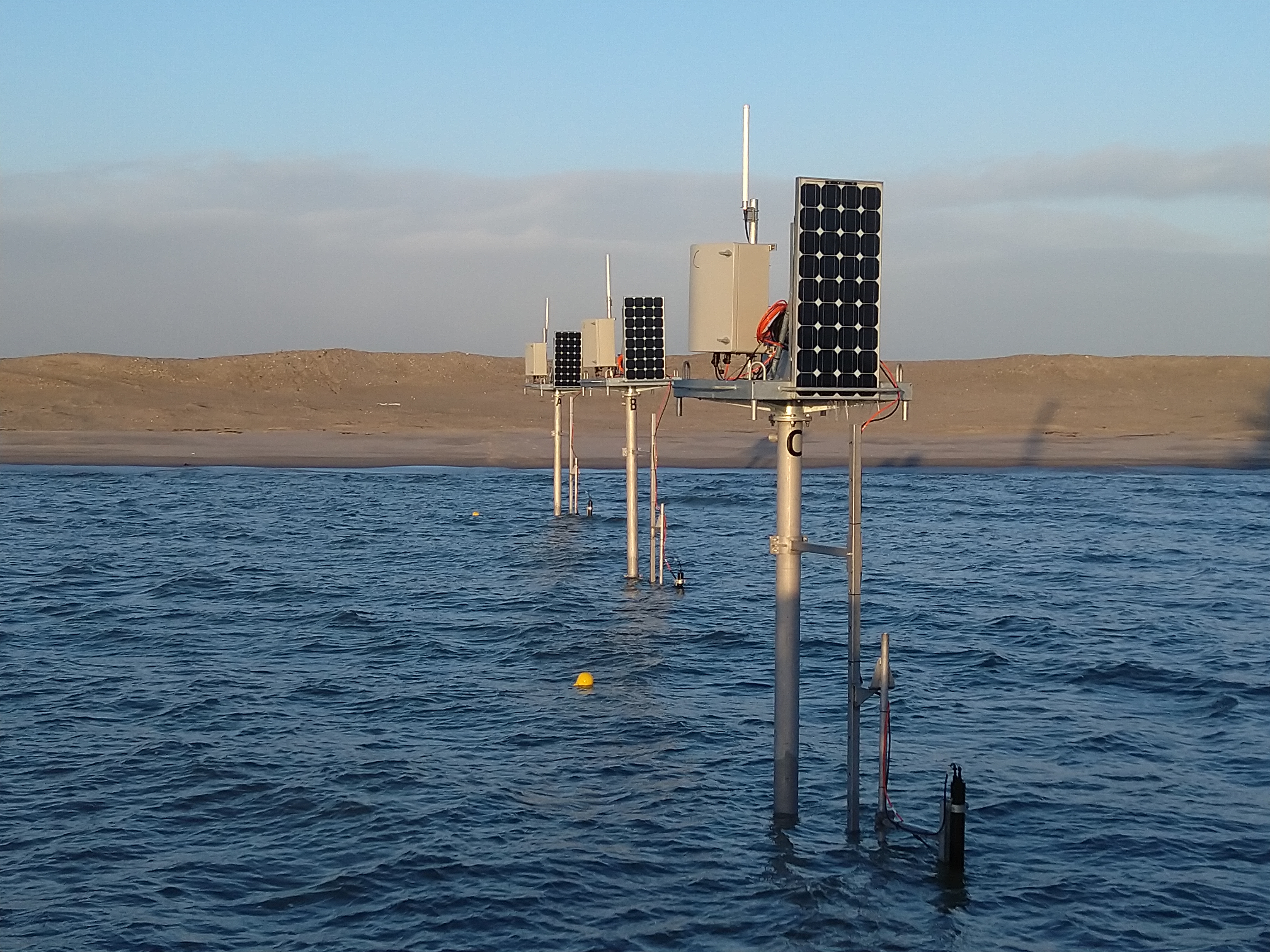 Three of the smaller monitoring stations in shallow water close to the coastline. Solar panels and greyish telemetry boxes are visible on the top, while semi-submerged ADCPs are visible in the waterline. Photo: Arjen Ponger/Rijkswaterstaat.

“Nortek was selected by means of a public tender procedure by the Dutch authorities and was finally chosen because they offered the best quality for an acceptable price. Nortek suggested various additional elements of the total setup that led to a more robust and reliable monitoring system,” says Rinse Wilmink, Project Manager and Advisor on coastal flood risk management and morphology at Rijkswaterstaat.

Not only was accuracy vital, but energy consumption needed to be low, as the instrument arrays were mounted on small platforms in shallow water powered only by small solar panels.

Nortek was also tasked with devising the telemetry system for data transfer from the instruments. Establishing the capability to reliably transfer and present up to 1 GB a day of data was challenging, both technologically and in terms of the time available. 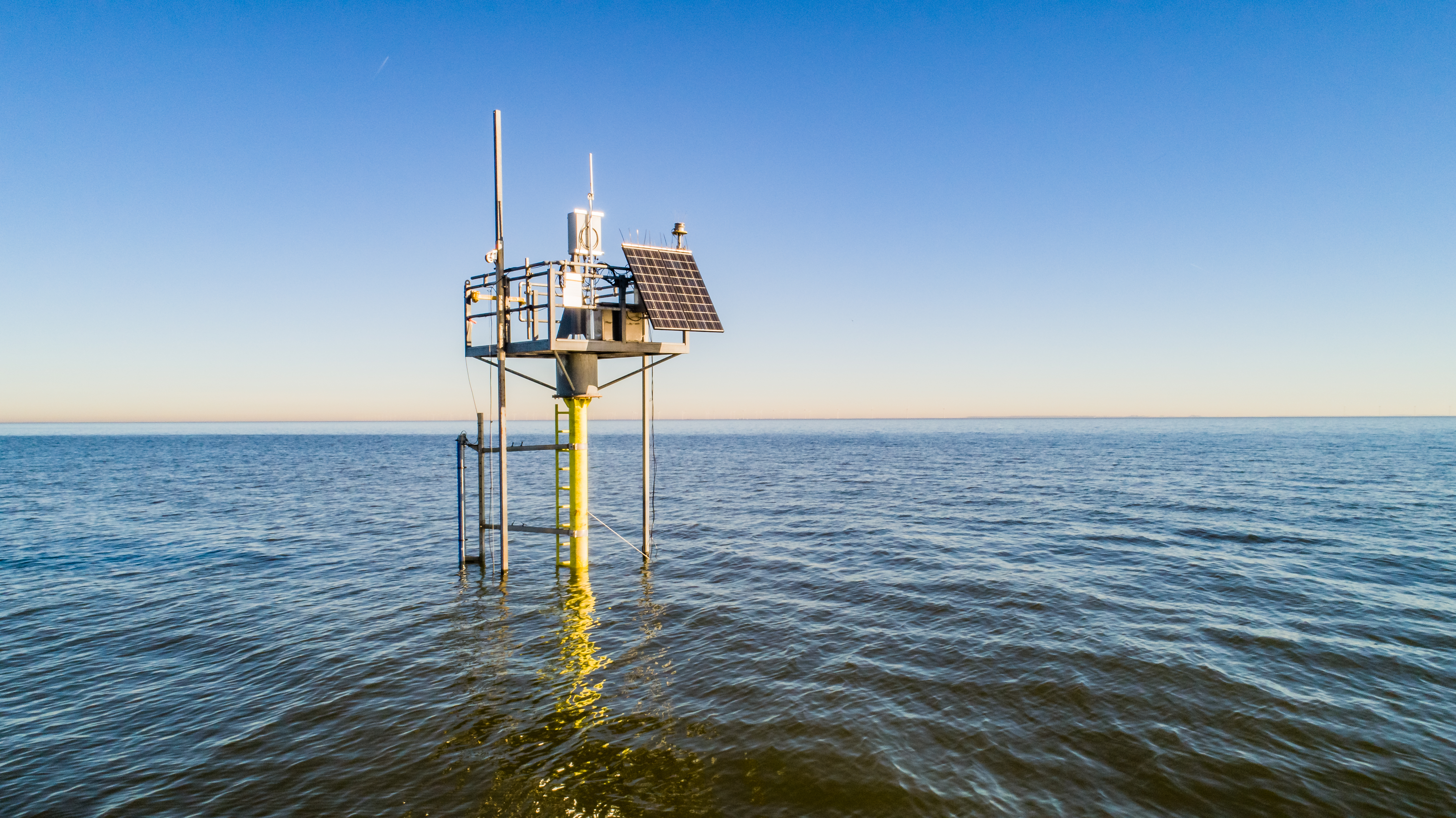 Numerous monitoring stations are helping to determine how to maintain the Houtribdijk levee, or dike, more efficiently. Photo: Frank Janssens/Rijkswaterstaat.

Firstly, Nortek’s engineers needed to get the job done in just two months, including the Christmas of 2018. Then, the client also required the firm to work with diverse instruments from multiple manufacturers, integrating all of these into one functioning system.

“Carrying out a project of this complexity in such a short timeframe was a big challenge, but two months after we took on the work, the systems were working,” says van der Grinten. 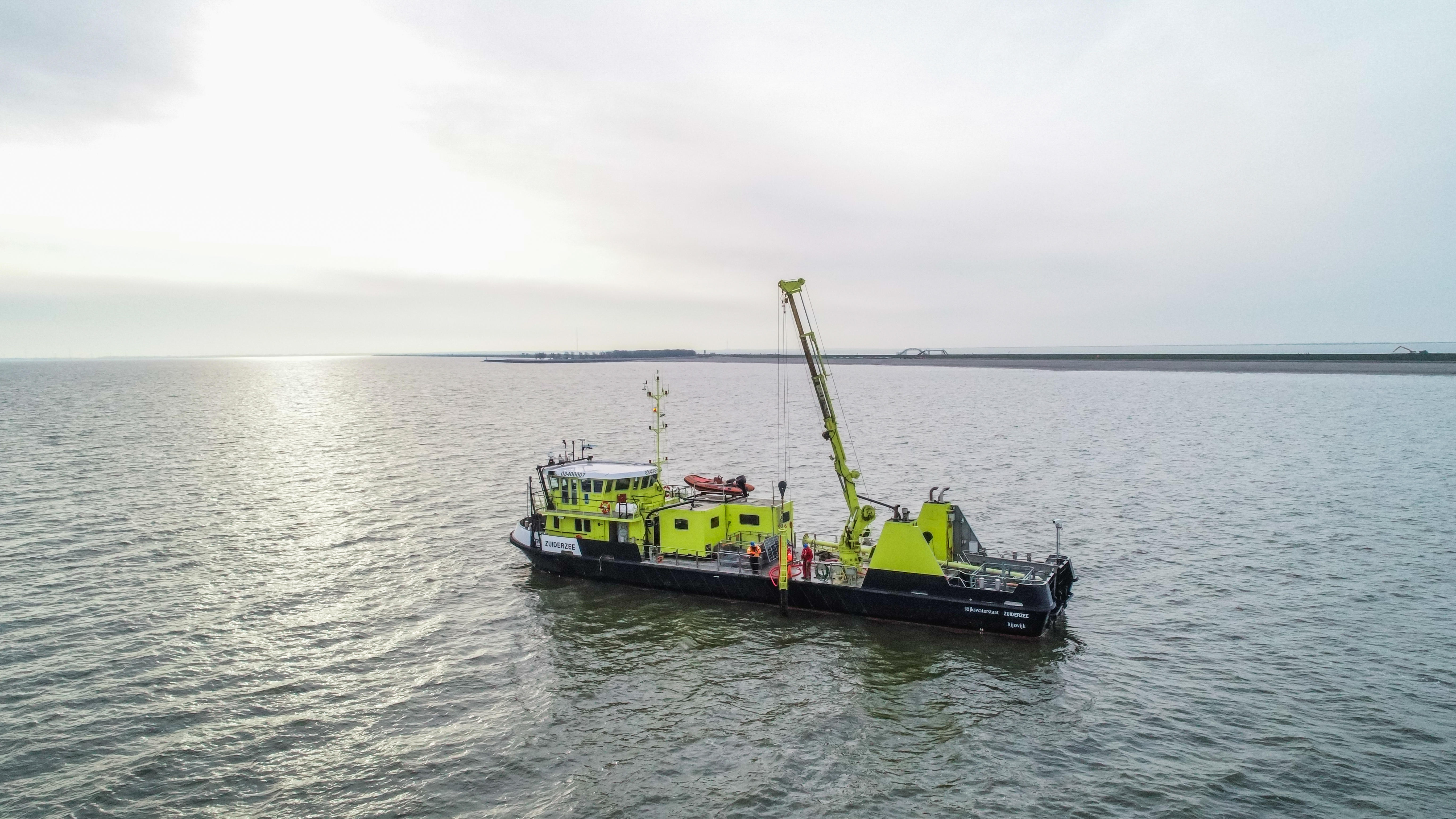 Using ADCPs for efficient maintenance of the dike

The monitoring program is helping to determine how to maintain the levee, or dike, more efficiently and the extent to which the sand banks will need to be maintained in coming years. The dike reinforcements – a mixture of the sand banks, stone and asphalt – are expected to be completed early 2020.

They are expected to function well for ten years without much maintenance once completed. But no one is sure how much, if any, further reinforcement will be needed beyond that time. The detailed data now being collected will give a much clearer idea of what’s needed. 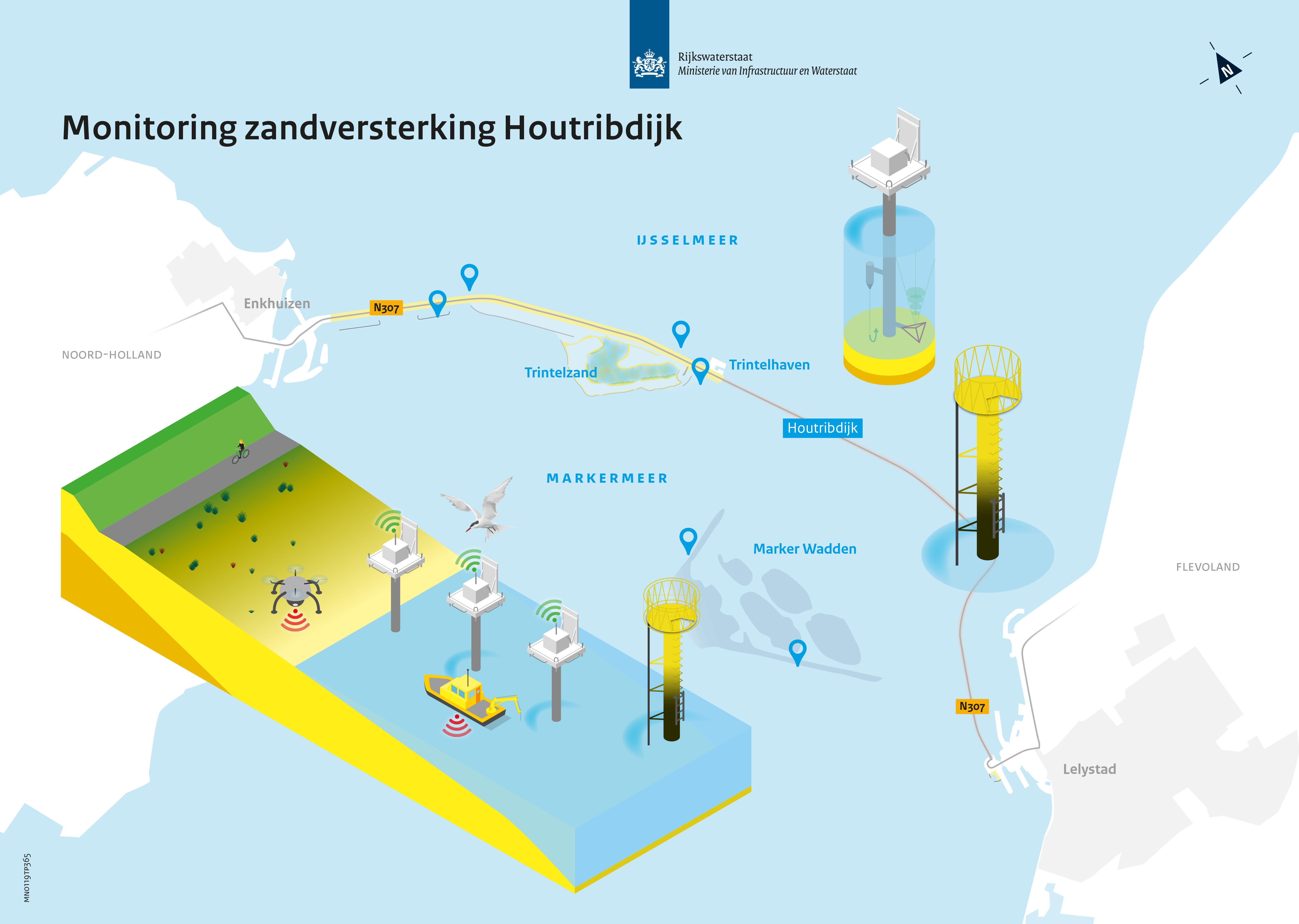 The Dutch authorities are making use of sandy shores as a flood-risk protection measure in a freshwater inland lake environment and are monitoring this in various ways. Illustration: Rijkswaterstaat.

The flood protection system by the Houtribdijk levee is being monitored in various ways:

Morphodynamics: Over time the sand will form an equilibrium with the incoming wave action. Various measurements will teach us which important processes are driving the deformation of the sand. ADCPs measure currents and waves and small-scale turbulence at these stations.

Circulating installations: Three locations are being monitored in detail where high-frequency waves, velocity and morphodynamic measurements are performed. These locations change over time during the program. Here, Nortek’s Vector current meter measures high-frequency currents in a small measurement volume, and the Aquadopp Profiler measures short-term variations in current profiles close to the bed.

Long-term benchmarks: These benchmark installations are active throughout the program. The installations measure offshore wave and velocity conditions in the Markermeer and IJsselmeer. ADCPs measure currents in these stations as well.