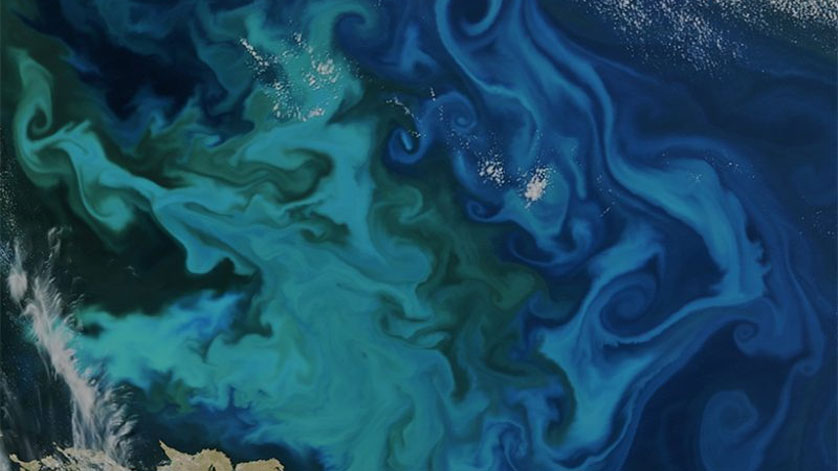 The chemistry of our oceans is changing. NOAA satellites are gathering data that shows the coastline of the Atlantic is absorbing more carbon dioxide (CO2) than ever before in human history, mirroring the increase of the gas in our atmosphere. The result is something we can’t always see with our eyes, or even notice from the coast.

An algae bloom near the Falkland Islands is shaped by meandering ocean currents. This image was acquired by the Visible Infrared Imaging Radiometer Suite (VIIRS) on board the Suomi National Polar-orbiting Partnership (SNPP) satellite on 5 December 2015. A new data resource, OCView, provides accessible tools for viewing and interpreting mapped satellite ocean color data.

In June 2018 NOAA scientists embarked on an Atlantic ocean voyage to find out why these changes are occuring. Leaving Nova Scotia and heading south to Florida on board the NOAA ship Henry B. Bigelow, the crew will take local measurements of the ocean water and the sea life depending on it. They’ll assess the growth of phytoplankton and the impact of sunlight on the sea surface to see what is contributing to the chemistry of the ocean. In addition, by investigating how much CO2 very young fish are absorbing and how seafloor corals are changing in color, the scientists aboard the Bigelow will be able to confirm the impact of our changing planet. The mission will also revisit some sites for the third or fourth time, allowing the scientists to compare change over a short period of time.

Human powered measurements like those from the team on the Bigelow provide side-by-side data sets to test and compare to data from buoys and satellites. NOAA’s STAR team sent a researcher aboard the Bigelow to investigate a very particular satellite ocean measurement called ‘water leaving radiances’. These light wavelengths are what our satellite space sensors measure when they image the oceans. The color of light from the ocean tells us about the amount of phytoplankton (chlorophyll) and other biological components of the oceans. Observations captured by NOAA’s polar orbiting satellites, like NOAA-20, allow us to create a global image of the ocean water on Earth each day. Learn more here.

This critical mission is made possible by the collaboration of eight federal and academic institutions including NOAA NESDIS Center for Satellite Application and Research. This voyage will ultimately help scientists understand what areas of our ocean are most vulnerable to increasing levels of CO2 so that we can make better decisions on how to protect them.