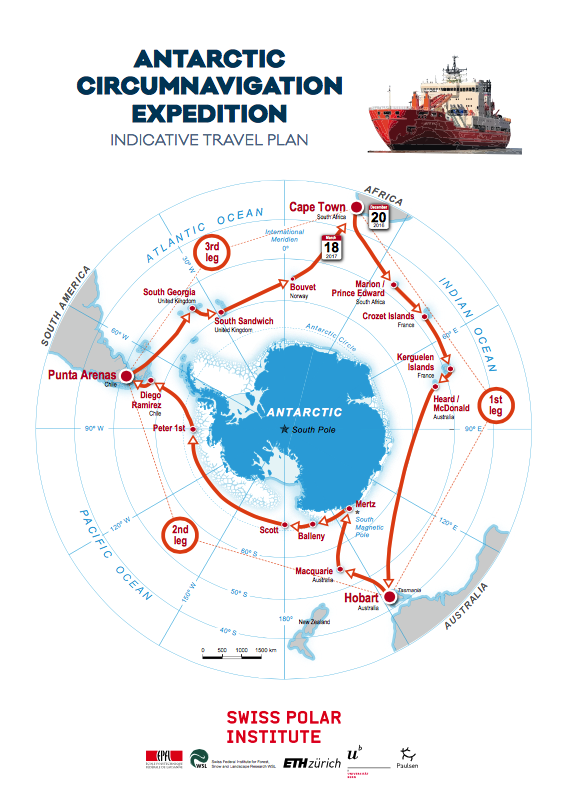 The Swiss Polar Institute with participation of the University of Bern will study the Earth’s poles and extreme environments. Its first project is ambitious: an international scientific expedition, comprising 55 researchers from 30 countries working on 22 research projects, will circumnavigate Antarctica.

The future of the Earth’s poles is critical. In the coming decades, major international negotiations will focus on the polar regions, which are bearing the brunt of global warming. Switzerland, intent on having its voice heard and making a contribution in a field in which it already has solid expertise, today announced the creation of the Swiss Polar Institute (SPI). This new interdisciplinary center will be devoted to researching the Earth's poles and other extreme environments.

The SPI, based at the Swiss Federal Institute of Technology in Lausanne (EPFL), is a consortium of Swiss universities – EPFL, the Swiss Federal Institute for Forest, Snow and Landscape Research (WSL), ETH Zurich and the University of Bern – and was cofounded with Editions Paulsen. Officially supported by the State Secretariat for Education, Research and Innovation (SERI), the SPI is a Swiss initiative with a decidedly international mission.

Polar explorer Frederik Paulsen is proud to be involved in this initiative: “The Swiss Polar Institute will help drive research in extreme environments, contribute to progress in the field of polar science and promote cooperation among public and academic institutions, industry and private-sector partners.”

To mark its launch, the SPI is organizing a major project: the Antarctic Circumnavigation Expedition (ACE) will be the first scientific expedition to fully sail around the southernmost continent. The purpose of this expedition, with key logistical support from Ferring Pharmaceuticals, will be to measure and quantify the impact of climate change and pollution in the Southern Ocean.

At the end of December 2016, some 50 researchers from around the world will set off for three months onboard the Akademik Treshnikov, a Russian ship dedicated to scientific research. Twenty-two research projects – submitted by teams from Switzerland, the UK, France, Australia, etc. – were selected for the expedition. The projects range from glaciology to climatology, biology and oceanography.

This expedition neatly illustrates the SPI’s mission: the Swiss Polar Institute is designed to be a platform for global experts in polar research to bring their combined knowledge to bear – such as by drawing parallels between polar environments and alpine regions. This is similar to what is being done in the field of space research. “Swiss universities owe their competitiveness to a shrewd approach of competing and cooperating with each other at the same time,” said Mauro Dell'Ambrogio, State Secretary for Education, Research and Innovation. “The Swiss Polar Institute is a great example of intelligent cooperation.”

The Institute’s role will also be to assess the state of the Earth's poles and climate in general, to outline the many challenges we face going forward and to keep the public informed. Its work is bound to have an impact on the development of new technologies for extreme environments. The SPI will be an important asset for Switzerland, which aims to play a key role in international agreements on the future of the polar regions. This includes discussions on the Antarctic Treaty.

The Earth’s climate balance is at stake

The Earth’s poles are fundamental to the planet's climate balance, and learning more about how they work through research is crucial. The climate, which is regulated by the interaction of atmospheric and oceanic currents, acts like a massive heat engine. This engine is powered by the transfer of heat between polar and tropical regions: currents of icy water deep in the ocean travel from the poles toward the equator, while warm water and air move across the ocean’s surface towards the frigid zones. This complex and fragile mechanism also plays a key role in the carbon cycle, in which the ocean absorbs a significant amount of the CO2 in the atmosphere.

Human settlement and activities may be concentrated far from the Earth’s poles, but they directly affect polar environments. “The poles are essential for climate balance, but they are also the regions where changes are most apparent: that’s where the largest temperature differences have been recorded,” said Philippe Gillet, vice president of EPFL and a specialist in Earth and planetary science. The 2015-2016 winter was the mildest on record at the North Pole. December and January temperatures there, normally close to -20°C, were above freezing.

The 22 projects selected for the expedition cover a spectrum of topics, including the composition of plankton, threatened animal species, the presence of microplastics in the surrounding water, the carbon cycle, microorganisms that flourish in the ocean depths or in ice, and the impact of waves on the coasts.

“The ACE initiative is a unique opportunity,” said Dr. Jean Jouzel, a glaciologist and climatologist on the ACE panel of scientists. “Bringing together all these projects and diverse fields of study in an expedition around Antarctica, where they will collect a huge amount of scientific data, will teach us about the past and help us predict the future of the Southern Ocean. Although isolated, this part of the globe bears the brunt of human activity and climate change. This is a key region that is vital for the carbon cycle and the future of the continent of Antarctica. In the coming centuries, it could play a fundamental role in rising sea levels.”

The projects will make use of the most advanced data collection and analysis technologies available. In addition, because they will be run in extreme environments, the projects will provide insight into biochemical compounds and microorganisms that up to now have been studied little if at all. The results could lead to discoveries and new and interesting applications in the fields of biotechnology, medicine and environmental science

The Swiss Polar Institute is a consortium of Swiss universities – EPFL, the Swiss Federal Institute for Forest, Snow and Landscape Research (WSL), ETH Zurich and the University of Bern – and was cofounded with Editions Paulsen. It is devoted to polar research and guided by the following objectives:

Global Challenges. The SPI shall enhance the Swiss scientific, economic and diplomatic contribution to understanding and solving Global Challenges such as climate and environmental changes and management of global resources through cutting-edge science and technology.

Innovative Public Private Partnerships. The SPI shall position Switzerland as a key player, federating stakeholders in the fields of Extreme Environments and Polar Research through scientifically-driven and collaborative global initiatives relying on international innovative public-public and public-private partnerships.

Headquartered in Switzerland, Ferring Pharmaceuticals is a research-driven, specialty biopharmaceutical group active in global markets. The company identifies, develops and markets innovative products in the areas of reproductive health, urology, gastroenterology, endocrinology and orthopaedics. Ferring has its own operating subsidiaries in nearly 60 countries and markets its products in 110 countries.