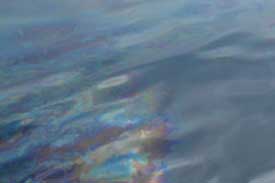 Scientists from Brown University and the University of Rhode Island investigated how Alcanivorax borkumensis, a dominate bacterium in marine environments that contain high hydrocarbon levels, can be supported to naturally degrade oil.

The researchers found that A. borkumensis grew faster when the oil-water interface was supplemented with dissolved organic nitrogen. Nitrogen reduced the time it took bacteria to enter an exponential growth phase (lag time) and increased growth rate (bacteria divisions) and oil degradation rate. They published their findings in the Journal of Petroleum Science and Engineering: An insight into the growth of Alcanivorax borkumensis under different inoculation conditions.

The team conducted laboratory experiments across oil-water interfaces to observe A. borkumensis’ response in the presence and absence of nitrogen. Researchers examined the effects of different initial bacteria concentrations and surface areas on the bacteria’s growth and oil biodegradation processes.

Bacteria inoculated with nitrogen exhibited a 57% decrease in growth lag time and a 25% increase in growth rate compared to bacteria with no nitrogen added. Higher bacteria concentrations initially decreased growth lag time, but did not affect their maximum concentration. Bacteria growth rates doubled in the wide vial (larger surface area) compared to the narrow vial (smaller surface area), suggesting that the bacteria’s ability to degrade oil increases as oil spreads.

Emulsions formed 24 hours earlier when nitrogen was added but remained similar at 48 and 72 hours, suggesting that the degree of emulsion was a function of bacteria concentration. The team inferred that adding nitrogen allowed the bacteria to better utilize surface hydrocarbons initially, but did not affect the bacteria’s ability to lower the surface tension of the oil-water interface or create an emulsion.

The researchers reported that bacterial production of a biosurfactant is likely the bottleneck for achieving exponential growth. Their results suggested that the biosurfactant production rate depends on the abundance of bacteria; however, the bacteria’s growth rate may depend more on the size of the oil-water interface area than on the initial number of bacteria present.

The researchers said that this study demonstrated that potentially toxic chemical surfactants may not be necessary to enhance bioremediation, which could have significant implications for future bioinspired oil spill remediation. The team recently published a complementary study on the effects of dispersant surfactants on A. borkumensis.

This research was made possible in part by a grant from the Gulf of Mexico Research Initiative (GoMRI) to the Brown University Center for Biomedical Engineering and the University of Rhode Island Department of Chemical Engineering for their project Multifunctional Colloidal Particles as Dispersants for Maximizing Biodegradation of Crude Oil.