New Multi-Institutional Grant Will Support a Fleet of Robotic Floats 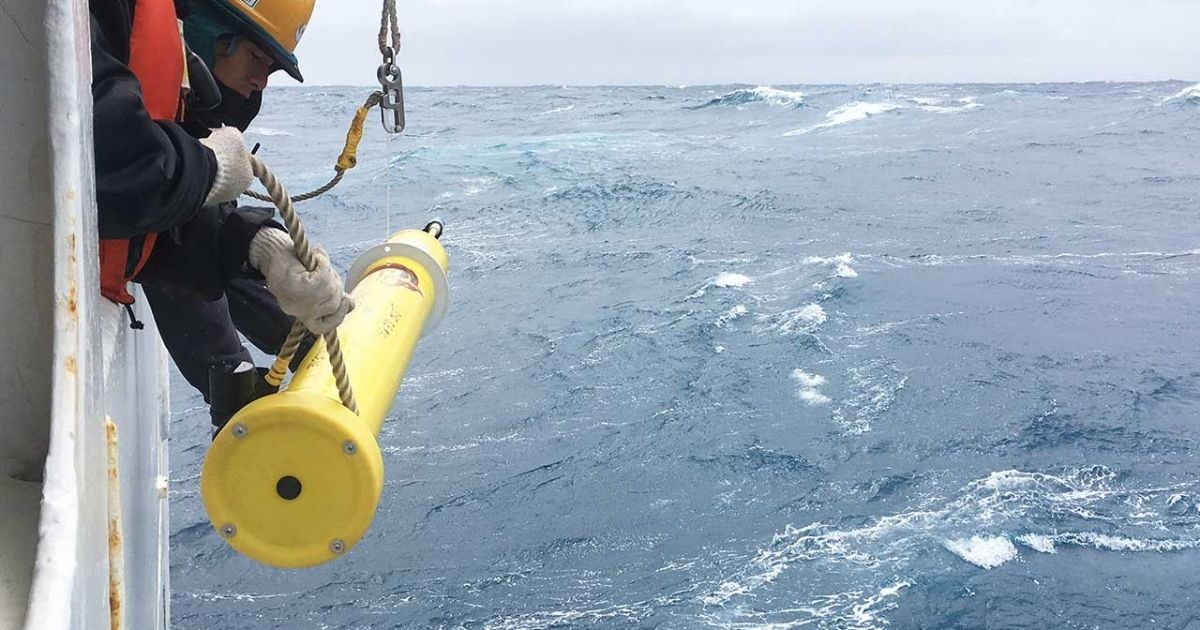 A SOCCOM (Southern Ocean Carbon and Climate Observations and Modeling) float like those that will be a part of the GO-BGC array being deployed from the Japanese research vessel Mirai in the Southern Ocean in 2019. (Image courtesy of SOCCOM. SOCCOM is supported by the National Science Foundation under NSF Award PLR-1425989 and OPP-1936222)

On October 29, 2020, the National Science Foundation approved a $53 million grant to a consortium of the country’s top ocean-research institutions to build a global network of chemical and biological sensors that will monitor ocean health.

Scientists at the Monterey Bay Aquarium Research Institute (MBARI), Woods Hole Oceanographic Institution (WHOI), University of Washington, Scripps Institution of Oceanography, and Princeton University will use this grant to build and deploy 500 robotic ocean-monitoring floats around the globe.

This new network of floats, called the Global Ocean Biogeochemistry Array (GO-BGC Array), will collect observations of ocean chemistry and biology between the surface and a depth of 2,000 meters (6,562 feet). Data streaming from the float array will be made freely available within a day of being collected, and will be used by scores of researchers, educators, and policy makers around the world.

These data will allow scientists to pursue fundamental questions about ocean ecosystems, observe ecosystem health and productivity, and monitor the elemental cycles of carbon, oxygen, and nitrogen in the ocean through all seasons of the year. Such essential data are needed to improve computer models of ocean fisheries and climate, and to monitor and forecast the effects of ocean warming and ocean acidification on sea life.

Although scientists can use Earth-orbiting platforms and research vessels to monitor the ocean, satellites can only monitor near-surface waters, and the small global fleet of open-ocean research ships can only remain at sea for relatively short periods of time. As a result, ocean-health observations only cover a tiny fraction of the ocean at any given time, leaving huge ocean regions unvisited for decades or longer. 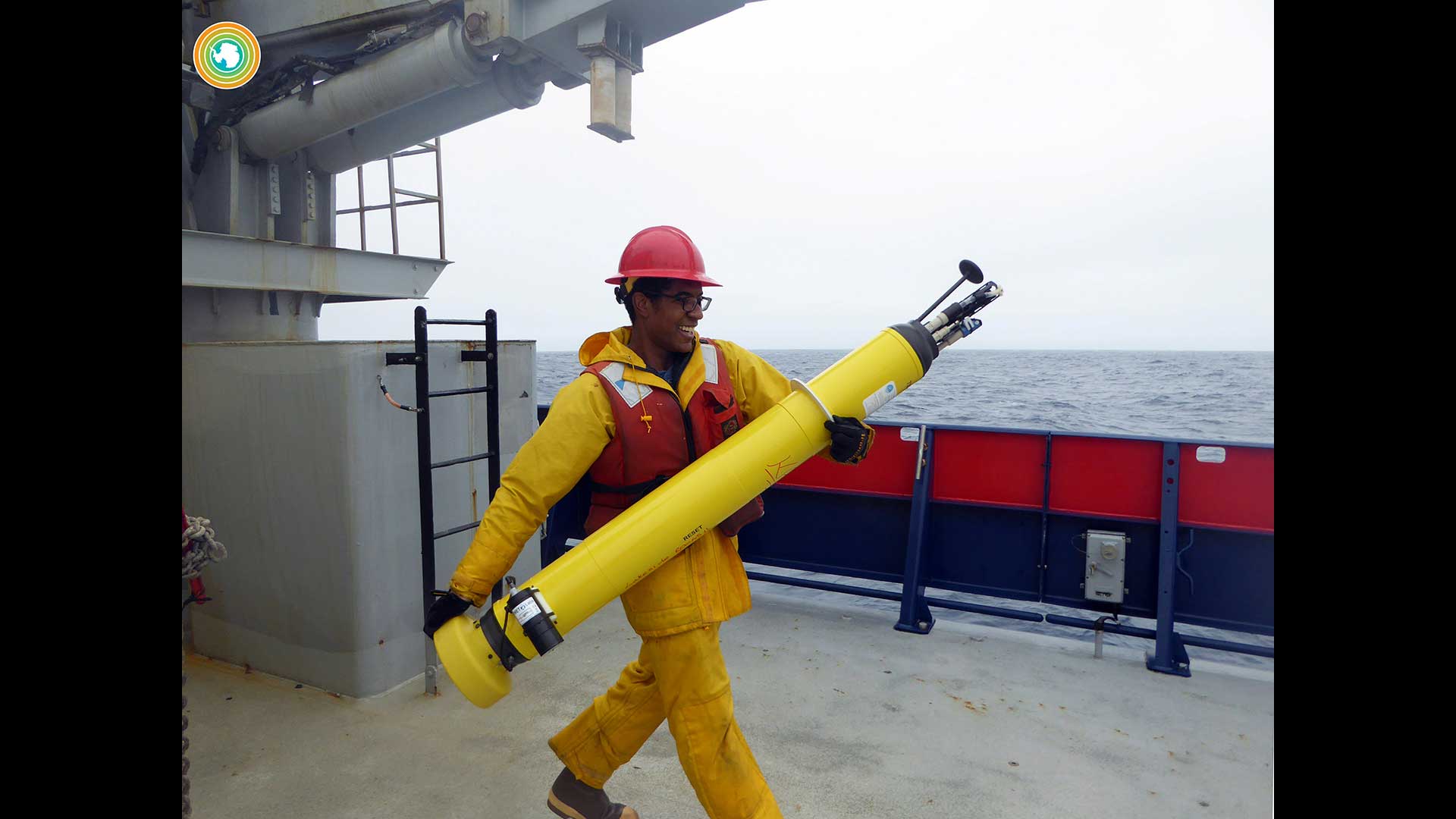 The GO-BGC array will be based on floats used in the SOCCOM (Southern Ocean Carbon and Climate Observations and Modeling) project like the one here being deployed in 2016. (Image courtesy of SOCCOM. SOCCOM is supported by the National Science Foundation under NSF Award PLR-1425989 and OPP-1936222)

A single robotic float costs the same as two days at sea on a research ship. But floats can collect data autonomously for over five years, in all seasons, including during winter storms, when shipboard work is limited.

Funding for the GO-BGC Array is provided through the NSF’s Mid-scale Research Infrastructure-2 Program (MSRI-2). The GO-BGC Array is the National Science Foundation’s contribution to the Biogeochemical-Argo (BGC-Argo) project. It extends biological and chemical observing globally, and builds on two ongoing efforts to monitor the ocean using robotic floats, both of which have been highly successful.

The first of these programs, the Argo array, consists of 3,900 robotic floats that drift through the deep ocean basins, providing information on temperature and salinity in the water column. Since its inception in 1999, Argo data have been used in 4,100 scientific papers. As the first global, subsurface ocean observing system, the Argo array has done an incredible job of measuring the physical properties of our ocean, but Argo floats do not provide information about the ocean’s vital chemical and biological activity. 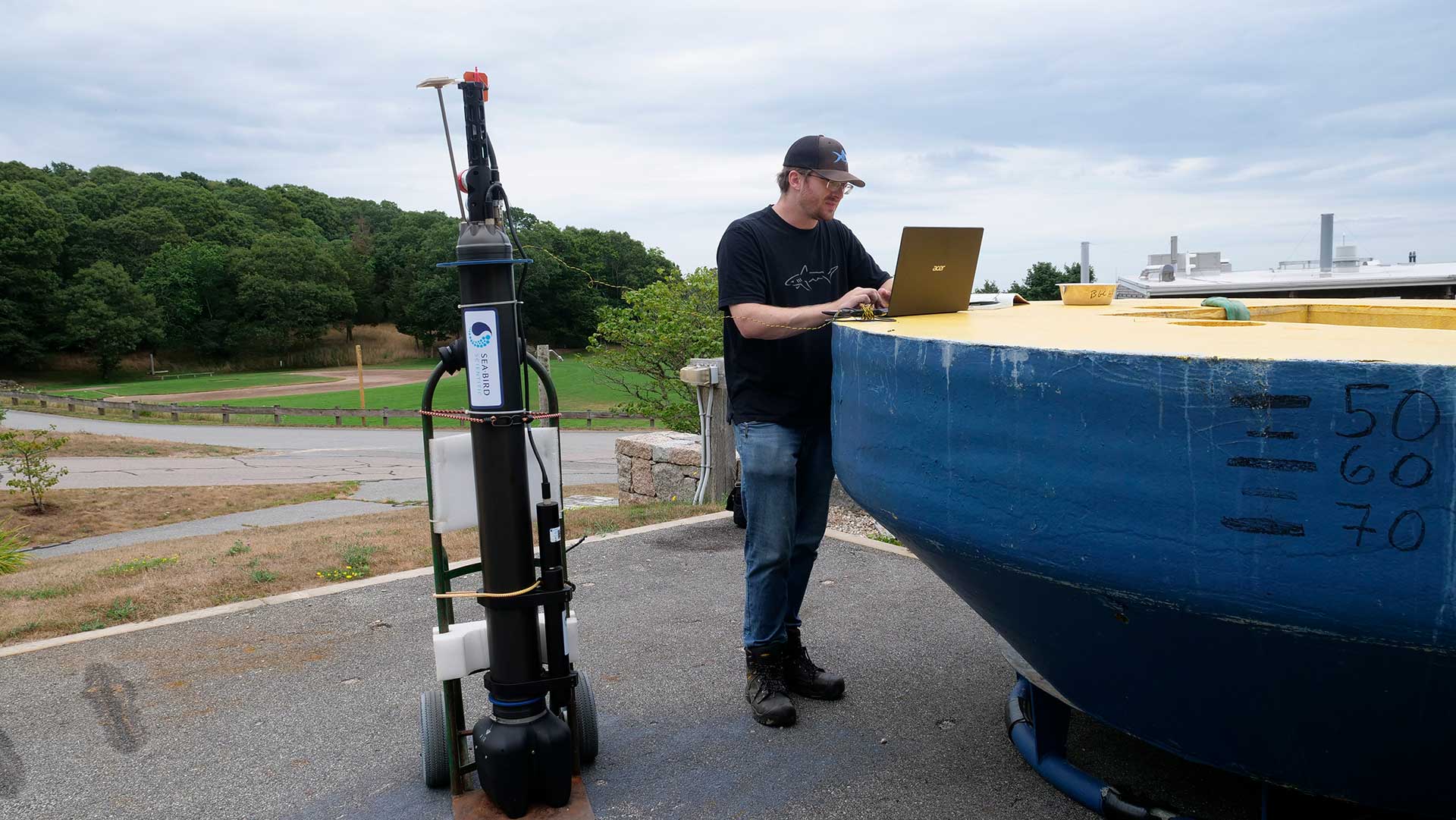 WHOI engineer Bill Dullea with one of the autonomous profiling floats that WHOI will help deploy in the Atlantic Ocean as part of the GO-BGC Array. (Photo by Ken Kostel, ©Woods Hole Oceanographic Institution)

Starting in 2014, the Southern Ocean Carbon and Climate Observations and Modeling (SOCCOM) program deployed a large array of robotic “biogeochemical” floats, based on the Argo design, but carrying sensors to monitor the chemical and biological properties of the ocean. SOCCOM floats have operated for nearly six years in the remote, stormy, and often ice-covered Southern Ocean—arguably one of the harshest marine environments on Earth. These floats have already provided critical new information about how the Southern Ocean interacts with the Earth’s atmosphere and winter sea ice.

Similar to the SOCCOM floats, the new GO-BGC floats will carry a number of sensors in addition to the core Argo sensors for temperature, depth, and salinity. These include instruments to measure oxygen concentration, pH (ocean acidity), nitrate (an essential nutrient for microscopic algae), sunlight (required for algal growth), chlorophyll (an indicator of algal populations), and particles in the water (including microscopic algae). Over the last few years, researchers have been testing, refining, and calibrating these sensitive instruments as part of the SOCCOM program and other international efforts.

The instruments on these floats will allow researchers to monitor the health of the ocean, including the growth and respiration of phytoplankton (drifting algae and microbes that use sunlight as a source of energy) and the nutrients and light that control these processes. In addition to supporting most of life in the ocean, including commercial fisheries, phytoplankton supply oxygen to and remove carbon dioxide from the ocean and the atmosphere. These microscopic plankton have huge impacts on our climate through their control on carbon dioxide. The new floats will also provide first-hand data on long-term changes in the ocean, including ocean acidification and the expansion of low-oxygen zones. 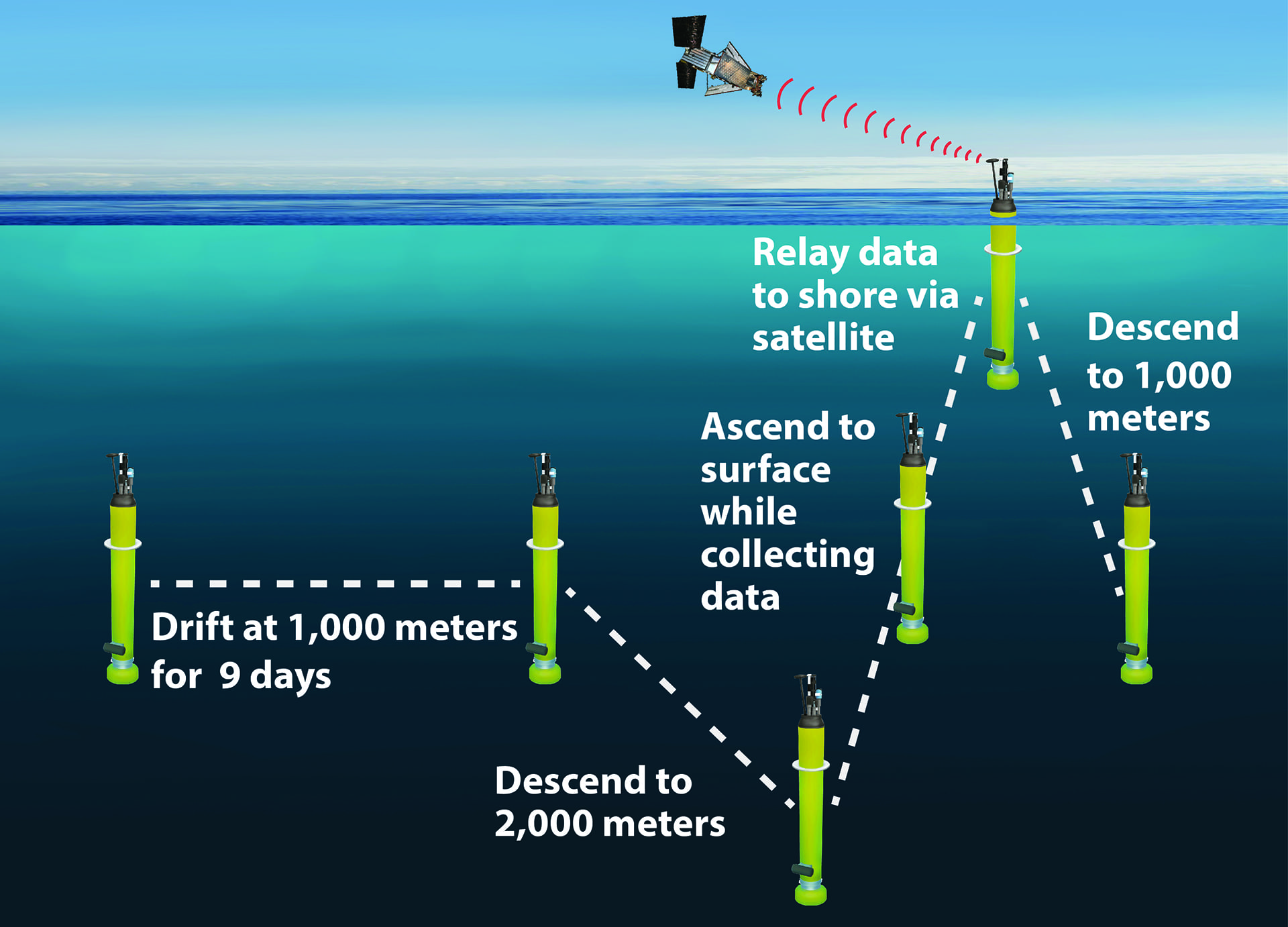 This five-year effort involves five research institutions. MBARI will coordinate the project, refine the sensors, take the lead in processing data from the floats, and perform outreach for the program. WHOI, the University of Washington, and the Scripps Institution of Oceanography,  will build and deploy floats in collaboration with commercial partners.

Researchers at Princeton University will contribute to the array design and project management, and ensure that the data are linked to global computer models of the Earth’s ocean and climate. This program will also have a significant impact on the ocean technology industry, including a number of commercial suppliers of ocean sensors and profiling floats.

A broad public-outreach program, including workshops, web-based curricula, and hands-on activities, will help scientists, teachers, students, and others use these data. In an expansion of the existing SOCCOM Adopt-A-Float program, the floats will be adopted by elementary- to college-level classes. Student activities will be developed through a partnership with the national Marine Advanced Technology Education program. In addition, courses based on GO-BGC technology will be offered through the The Sandbox, a makerspace at the Scripps Institution of Oceanography.

The researchers hope that GO-BGC will inspire other countries to contribute similarly instrumented floats, as part of the new global biogeochemical ARGO effort. Ideally, this expanded network would grow to a sustained array of 1,000 biogeochemical floats uniformly distributed around the world ocean, and spaced about 1,000 kilometers (620 miles) apart.

“Vast swaths of the Atlantic remain unmonitored with respect to ocean health, except for sporadic, infrequent research ship visits and widely spaced moored instruments,” added Susan Wijffels, WHOI senior scientist and co-principal investigator of GO-BCG. “Based on what we know about the Atlantic’s critical role in Earth’s climate and other key planetary systems, we need to fill in those gaps.”

"The GO-BGC Array will provide the scientific community with the unprecedented ability to take the pulse of ocean ecosystems and monitor the health of underlying chemical cycles on a global scale,” said David “Roo” Nicholson, WHOI associate scientist and co-lead of GO-BCG at WHOI. “Such observations are critical to understanding how the ocean will respond to multiple, broad-scale stressors such as warming, acidification, and deoxygenation."