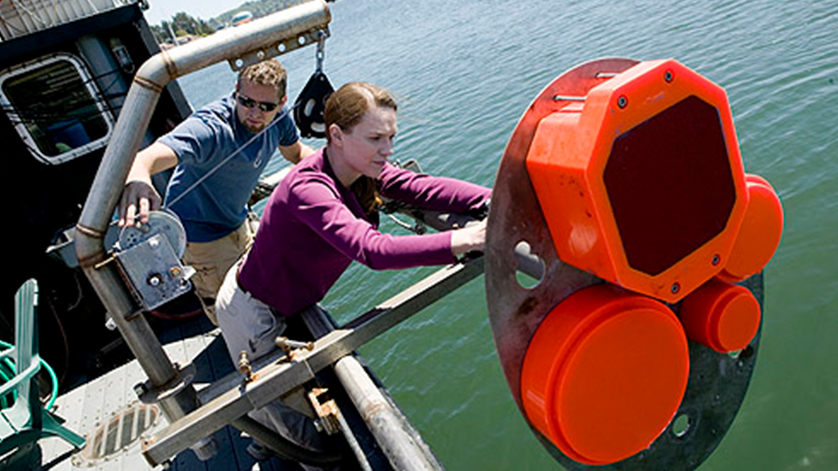 Most of the ocean is invisible to humans. Neither sunlight nor radio waves travel very far in seawater. Sound, however, can travel for dozens, sometimes hundreds of kilometers, underwater. MBARI’s newest senior scientist, Kelly Benoit-Bird, takes advantage of this fact, using sound to observe animals such as seabirds and dolphins as they chase their prey underwater.

The glider uses environmental cues to dive below the surface, find dense schools of fish, and stay in these food-rich areas for extended periods of time. The glider also carries sensors that measure seawater chemistry, temperature, and salinity. Through such studies, Benoit-Bird and her colleagues can identify “biological hotspots” where predators and prey tend to congregate. One result of this work could be a better understanding of how wild animals and humans compete for fish in the ocean.

In another recent project, Benoit-Bird used sound to study beaked whales. Related to dolphins, but two or three times larger, beaked whales spend most of their time hunting deep-sea squid 800 to 1,200 meters below the ocean surface. For this reason, marine biologists know very little about these elusive mammals. However, they are known to be very sensitive to loud, human-generated noises such as some sonar systems used by the U.S. Navy.

Using acoustic sensors integrated into a deep-diving autonomous underwater vehicle (AUV), Benoit-Bird and her colleagues studied the feeding and diving behavior of beaked whales in Navy test ranges off Southern California and the Bahamas. Their goals were to figure out why the whales kept returning to certain areas despite repeated sonic disturbances, and whether the disturbances caused the whales to spend more time and energy finding food. This work could help minimize the impacts of human sounds, including military sonar, on populations of marine mammals.

These are just two of the innovative projects that Benoit-Bird has worked on over the last decade. She has also used sound to study Humboldt squid in the Gulf of California, spinner dolphins in Hawaii, and fur seals, kittiwakes, and murres in the Bering Sea. In all of these studies, Benoit-Bird chose to examine not just the behavior of a single species of predator, but their interactions with other animals.

Although the military has used sonar to detect ships and other hard objects for about a century, advances in computer hardware and software have allowed researchers to use sonar to track living organisms, such as fish and marine mammals, with increasing precision.

Working with her research partner, Chad Waluk, Benoit-Bird spent years fine-tuning active sonar systems to detect and visualize individual marine organisms. In some cases, the sound waves reflect off air trapped within the swim bladders of fish or the lungs in marine mammals. In other cases, the sonar allows researchers to visualize the air bubbles released by seabirds when they dive below the surface.

Depending on conditions, Benoit-Bird can estimate both the number and size range of animals in a group. Benoit-Bird is quick to point out that the sounds her research sonar systems emit are similar in volume to the calls of marine mammals, and much quieter than the “fish finders” used by recreational boaters. This is critically important, because she doesn’t want to disturb the very animals that she is trying to study.

Benoit-Bird comes to MBARI from Oregon State University, where she worked from 2004 to 2016. She said that her move was inspired by the opportunity “to push the envelope and take risks,” as well to work on a wide variety of research platforms, from AUVs to MBARI’s cabled seafloor observatory. As someone who has built many of her own research instruments, Benoit-Bird is also looking forward to collaborating with engineers and scientists at MBARI.

Benoit-Bird sees a number of opportunities for studying predator-prey relationships and biological hot spots in Monterey Bay. Hot spots in this region are often found where two water masses meet—for example, where cold, nutrient-rich upwelled water flows into Monterey Bay, or where nutrient-rich water flows out of Elkhorn Slough at low tide. In each case, Benoit-Bird said, “I’m trying to answer the question, ‘How do biological hotspots develop, and how do they affect other components of the ecosystem?’” Benoit-Bird also hopes to expand her research into deeper water. She noted that her acoustic sensors could help answer questions such as, “How is life distributed vertically within the water column, and how does this effect the distribution of air-breathing predators?”

By installing active acoustics on MBARI’s remotely operated vehicles (ROVs), Benoit-Bird hopes to answer other long-held questions, such as “How many and what types of animals are not seen by the ROVs because of their bright lights and loud motors?” Similarly, some of MBARI’s AUVs, which are already outfitted with sonar systems to map the seafloor, could be reconfigured to map the distributions of deep-sea animals.

Benoit-Bird finds work at sea to be both exhilarating and challenging. But analyzing gigabytes of data from active sonar systems is an even bigger challenge, often requiring many days or even months of effort. Benoit-Bird said that what keeps her going are those “aha” moments when the data start to yield trends or patterns that provide insights into key biological processes. She also enjoys collaborating with other scientists and marine engineers to create new devices or research approaches that result in dramatic new perspectives on marine life.

As part of an institute-wide initiative, MBARI researchers are currently looking at a variety of new technologies for visualizing the hidden world beneath the ocean surface. Benoit-Bird’s innovative use of sonar will be a key part of this effort, and has already given marine biologists and resource managers fascinating new views of ocean predators and their prey.