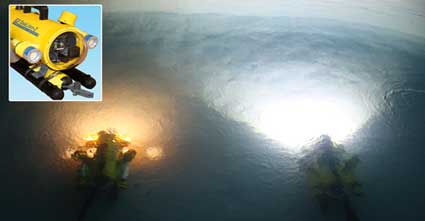 JW Fishers Mfg., a company specializing in the design and manufacture of underwater search equipment for almost 50 years, is introducing new features for some of their key products for 2016.

Fishers popular SeaOtter-2 and SeaLion-2 ROVs will now come standard with LED lights on the front AND rear of the underwater vehicle. The two front lights have been upgraded from 100 watt quartz halogen bulbs to high intensity LEDs, each producing 2200 lumens, significantly more illumination than the old style bulbs. The intensity of the LED lights can be increased or decreased with the push of a button on the surface controller. The new lighting system employs a single-source COB (chip on board) LED which emits light from a single plane eliminating problems previously experienced with the multi-LED type light source.

The color temperature of the new lights is 5000 degrees Kelvin; very close to the 5500K of natural daylight, and within the recommended range for shooting underwater video. Colors are illuminated more accurately with the LEDs than with the warm 3500K temperature of quartz halogen lights. The new lighting enhances picture quality and maintains a constant color temperature throughout the entire range of illumination intensity, something not possible with the halogen lights. Another key advantage of the LED lights is their lifespan. Quartz halogen lights require regular replacement and can be damaged if the ROV is dropped or takes a hard shock. The LED lights last virtually as long as the ROV, rarely if ever needing replacement. Fishers is also offering an upgrade to new lighting for all existing SeaOtter-2 and SeaLion-2 ROVs for the low price of $995. Not only will the LEDs be included on new ROVs, these lights will be a standard feature on the company’s other underwater video systems including the DV-1 drop video, TOV-1 towed video and DHC-1 diver-held video system.

The other new addition to JW Fishers line is an optional tablet computer for use with their sonar systems and boat-towed detectors. The Microsoft Surface 3 tablet is mounted in the lid of the equipment’s control console eliminating the need for a separate laptop computer to run the system software. Eliminating the external laptop and it’s connecting cables is a key advantage, another is the tablet’s high resolution and ultrabright display which makes it much easier to see even on sunny days. Having the tablet mounted in the console’s lid provides protection from the elements and makes for a cleaner, sleeker equipment package.

Also coming in 2016 is new, re-designed website with easier navigation, and lots of additional features including videos showing how to use and operate many of Fishers underwater search systems.