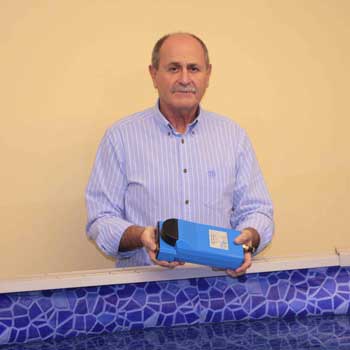 The new Dolphin 2D sonar from Marine Electronics Ltd (MEL) was making a splash on the company’s stand at Oceanology 2016, where designers of small AUVs and ROVs were able to see what can be achieved when using such a small, low cost package. A prototype of the new sonar was first presented to the industry a year ago since when it has been refined and tested to the point where it is now ready for operational use.

The new Dolphin 2D sonar has been based-on MEL’s existing longer-range Dolphin 3001 model which operates at 250 kHz. The new Dolphin 2D is a 720 kHz model which introduces some important new benefits. The most notable of these are its compact size and light weight which make it an ideal choice for use on small ROVs and AUVs as well as for other applications on surface craft. Its versatility and ease of use is also improved by an Ethernet connection to the underwater unit.

Introducing the new addition to the company’s range, MEL director, Brian Evans said; “It features a one-piece composite ceramic unit with 96 elements which means that the new Dolphin produces 192 acoustic beams which create a 120 degree horizontal display. For AUV use it is significant that it has a low power consumption of less than 15 watts yet we are very pleased that our development programme has resulted in it being able to provide clear imagery at most ranges. For very close range work at less than 1-metre it can provide clear images at 30 frames per second and when it is used for longer ranges up to 100 metres it can generate imagery at 7.5 frames per second. In addition, if a customer needs a 2D sonar for targets at a specific distance we can also adapt the basic model so that it meets their needs exactly,” he said. “Despite its compact size the new Dolphin also contains a nine-axis MEMS motion sensor and its output requires no surface image processing. This means that whatever leaves the unit via its Ethernet connection is what the user sees on the surface.”

The new Dolphin 2D now joins a range of sonar products developed by Marine Electronics Ltd. The company is based in Guernsey, UK and is well known for its ability to design and build specialised acoustic products that are tailored to meet the specific needs of clients around the world. Visitors to the company’s stand at Oceanology will have the opportunity of discovering the full specifications of the new sonar and discussing how it might meet their needs for high performance technology at a competitive price.