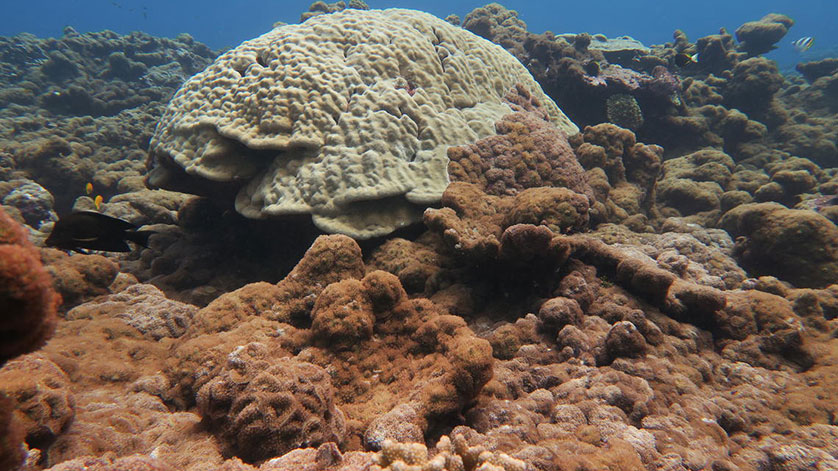 Control efforts such as the removal of shipwrecks and application of chlorine may help mitigate the damaging effects of corallimorph, which is a type of invasive anemone, on valuable coral reefs in the Central Pacific Ocean, according to a new U.S. Geological Survey study.

“Coral reefs are home to a significant diversity of marine life, provide valuable economic and environmental services to millions of people, buffer shorelines from erosion and waves and can serve as a resource for the development of new medicines,” said Thierry Work, a USGS scientist and the lead author of the study.

Corallimorphs, or CM, can rapidly spread in coral reefs that have been degraded by environmental or man-made disturbances. At the Palmyra Atoll National Wildlife Refuge in the Central Pacific, researchers found CM expanding and smothering otherwise pristine coral reefs in an area near a shipwreck. Starting in 2007, USGS scientists and partners surveyed the CM-infested coral reef before and after removal of the shipwreck. They found that wreckage removal helped reduce the proportion of highly CM-infested areas from 21 percent to 14 percent, marking the first time that shipwreck removal was shown to have beneficial effects for reef recovery from CM.

The scientists then devised additional methods to control CM on a small scale. By exposing CM to chlorine, they found that they could nearly eradicate the organism from small plots of about 100 square feet after several days. These plots remained mostly CM-free for at least 15 months, allowing native organisms such as coralline algae and small corals to regrow.

“Scaling up the control methods tested in our study might provide hope that the Palmyra corallimorph could be contained or possibly eradicated,” Work said. “Coupling these methods with shipwreck removal could potentially help control infestations at other sites.”

Coral reefs can experience phase shifts where they quickly transition from coral-dominated to a uniformity of other organisms, typically algae. Palmyra is a less common case where the transition was from corals to CM. USGS scientists discovered the CM infestation at the Palmyra shipwreck in 2007. The infested area had more than tripled by 2011, prompting the U.S. Fish and Wildlife Service to remove the wreckage in 2013.

“Ships are often sunk deliberately to promote diving or recruitment sites for reef organisms, but our study provides a cautionary note for such practices in tropical marine systems,” Work said.

The USGS partnered with the University of Hawaii, Bigelow Laboratory for Ocean Sciences, the U.S. Fish and Wildlife Service and The Nature Conservancy on the new study.