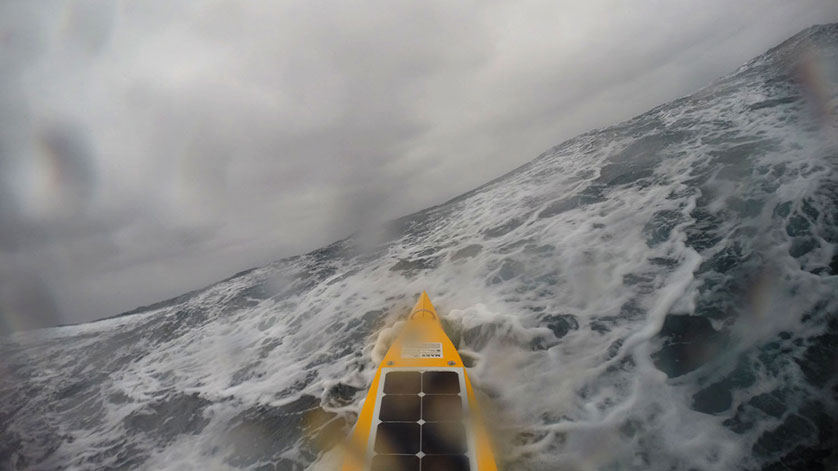 Carbon dioxide in remote parts of the world’s oceans will be measured by a new instrument being developed by scientists at the National Oceanography Centre (NOC).

The CaPASOS (Calibrated pC02 in Air and Surface Ocean Sensor), created by the NOC in partnership with the University of Exeter, will be carried on unmanned autonomous vessels to locations including the Southern Ocean. Ship-borne sensors gather data in many parts of the world, but extreme and hostile conditions in some oceans, especially during winter, mean that few ships are able to go there.

The new sensor will help improve our understanding of the relationship between carbon and the oceans. Human activity, mainly the burning of fossil fuels, is responsible for the release approximately 10 petagrams of carbon per year into the atmosphere, about half of which is absorbed by the ocean. The other half is being absorbed, it is believed, in approximately equal amounts by ‘carbon sinks’, meaning vegetation on land and uptake by the ocean. The ocean uptake of carbon dioxide slows climate change, but that process also causes ocean acidification, which can adversely impact marine life and the communities that depend on it for their livelihoods.

The CaPASOS instrument will measure partial pressure of carbon dioxide (pC02) in the air and surface of the ocean, both of which are vital to calculating how C02 moves between the air and sea.

Professor Matt Mowlem, Head of Ocean Technology and Engineering at the NOC, said: “The development of the CaPASOS instrument will use proven technologies including novel combinations of high metrology performance prototype, being delivered by the University of Exeter, with extremely robust in situ sensor technology developed at the NOC, which includes existing standardised sensor-platform interfaces and reliability engineered systems. The resulting technology will fill key gaps, for example by gathering data from the Southern Ocean, and will be a viable product in oceanic and other aquatic environments where robust autonomy and excellent metrology are an advantage.”

Professor Andrew Watson from the University of Exeter, said: “While carbon dioxide levels in some parts of the oceans are well monitored, there are other very large regions – the Indian, South Pacific and Southern oceans, for example – where we have woefully insufficient data.

“The technical challenge is to adapt the successful principles of the instruments mounted in ships or large buoys, where space and power are not limiting factors, to achieve the same high accuracy with small space and power footprint, long endurance and resistance to violent motion, all of which will be needed on an unmanned vessel.

“We will achieve this by bringing together the extensive experience that the University of Exeter group has in operating ship-based CO2 systems over 20 years, with improvements in engineering, utilising the experience and expertise of the National Oceanography Centre’s Technology and Engineering groups.”