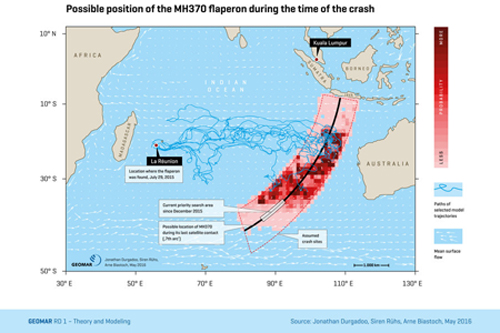 For more than two years an extensive search has been underway for the missing Boeing 777 of Malaysia Airlines (MH370) in the southeastern Indian Ocean. The first confirmed piece of debris was discovered last July on the island of La Réunion, and since then more pieces of the missing Boeing have been found along the southeast coast of Southern Africa. The question arises whether this additional information can be used to optimize the last remaining months of the extensive and costly search effort. A European research consortium under the leadership of GEOMAR Helmholtz Centre of Ocean Research presents results of a new analysis.

The graphic shows the most probable positions during the time of the crash of the MH370 flaperon found on La Réunion. Source: Jonathan Durgadoo, Siren Rühs, Arne Biastoch (GEOMAR), May 2016

Flight MH370 seemed to disappear without trace after it vanished from radar screens on 8 March 2014. The discovery at the end of July 2015 of a part belonging to an aircraft’s wing brought renewed hope. A flaperon belonging to MH370 was found several thousand kilometers away from the suspected crash site on the island La Réunion. Meanwhile, more pieces from this aircraft have been found along the African southeast coast in Mozambique and South Africa as well as on an island belonging to Mauritius. Marine scientists from Kiel presented their first simulations with an ocean model about the possible drift of the flaperon shortly after it was found. They have now refined their calculations in a joint effort with colleagues in France and the UK. Based on these latest results and under the assumption that analysis of satellite communications are correct, the most likely source region is located west of Australia, north of the current search area.

Dr. Jonathan Durgadoo, Prof. Dr. Arne Biastoch and Siren Rühs from GEOMAR Helmholtz Centre for Ocean Research Kiel used ocean and wave models in combination with observational data. This provides a coherent realistic dataset for their drift analyses to determine the possible origin of the flaperon. To do so, they released particles, representing ‘virtual’ flaperons, around La Réunion and computed their trajectories back in time. "Of course it does not make much sense just to track only a few flaperons within the model," Dr. Durgadoo explains. "We have tracked back almost five million particles over a period of 16 months," Durgadoo continues. "We subsequently calculated the probable region of the particles’ positions on 8-9 March 2014."

“In our recent calculations we included more physical processes in order to simulate the drift more realistically”, Prof. Biastoch explains. “In particular the drift induced by wind generated ocean waves is now included”, Biastoch continues. “Even though we use state-of-the-art modeling systems, representing the ocean currents in the Indian Ocean quite well, all simulations naturally contain limitations. Our investigation is one important piece of the puzzle in finding MH370.”

As a result of the new calculations the possible source region of the flaperon was refined, and “While it is shifted a bit southward from the initial study done last September, our basic result that most particles originate from a region north of the current search area remains unchanged”, states Dr. Durgadoo.

The debris that were recently found at other locations in the southwestern Indian ocean fit this interpretation. “The ocean currents through the Mozambique Channel and along the South African coast are extensions of the route that passes by La Réunion”, says Prof. Biastoch. The Australian search authorities are aware of this report. “Whether or not these new results will be used to facilitate the last few months of the ongoing search for MH370 is not clear”, Arne Biastoch summarizes.