Mediterranean Seamounts, a Hotspot of Biodiversity 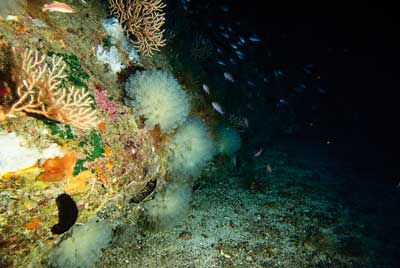 Relatively recent knowledge has been acquired by the latest advances in technology which have led to demonstrate the ecological significance of unknown ecosystems. Thanks to that new technology, in the Mediterranean over 242 seamounts, banks rises, highs, hills, spurs and other kind of sea floor elevations have been identified and described through the project “Atlas of the Mediterranean Seamounts and Seamount-like Structures” coordinated by Maurizio Würtz and Marzia Rovere with the collaboration of more than 20 experts and with the support of the IUCN Centre for Mediterranean Cooperation.

The Atlas’s aim is to produce a useful tool for future research planning as well as a reference for conservation and governance actions in deep sea waters of the Mediterranean. The publication gathers basic information with morphological and geological descriptions, and data on biodiversity, habitats, specially benthic and pelagic communities around the seamounts. The information presented is divided among 5 regions: Alboran sea, Western Mediterranean, Tyrrhenian sea, Sardinia Channel, Strait of Sicily, Ionian sea, Adriatic sea, and Eastern Mediterranean. The term of “Seamount” identified elevations rising at least 100 m from the surrounding seafloor, consequently it encompasses a wide set of underwater features.

“The Atlas represents an important step towards a better understanding of the Mediterranean deep sea functioning and of the importance of these structures for both fisheries and large pelagic species, contributing on the long term to the sustainability of fisheries”, says, Maurizio Würtz, from the University of Genoa and Coordinator of the publication.

Seamounts are increasingly exploited by humans: fishing on seamounts is a widespread activity with important damages caused by trawlers. Additional emerging environmental issues include the exploration for seabed minerals as well as gas and oil exploitation, especially in the central and eastern Mediterranean. Moreover, seamount communities are very slow to recover from these impacts.

“The fragility of seamount ecosystems, and the magnitude of threats they are facing, make an assessment of their management and protection needs an urgent task. This Atlas, a first step towards this process, will certainly help. However, the road is still long until the declaration of a coherent and representative network of marine protected areas covering deep sea and offshore marine environments”, says Alain Jeudy de Grissac, Coordinator of the IUCN Mediterranean Marine Programme.

In coordination with relevant Mediterranean partners and specialized entities, in particular the Barcelona Convention constituency, the General Fisheries Commission for the Mediterranean of FAO, the Agreement for the Conservation of Cetaceans ACCOBAMS and OCEANA, the IUCN centre for Mediterranean Cooperation aims at developing and reinforcing the network of open seas and deep seas experts and exchange of information for a better conservation and sustainable use of this important domain of the Mediterranean.

The seamount are defined as hotspots of biodiversity, greatly affecting the productivity of offshore ecosystems and the distribution of pelagic top predators.

This publication was financed by the MAVA Foundation