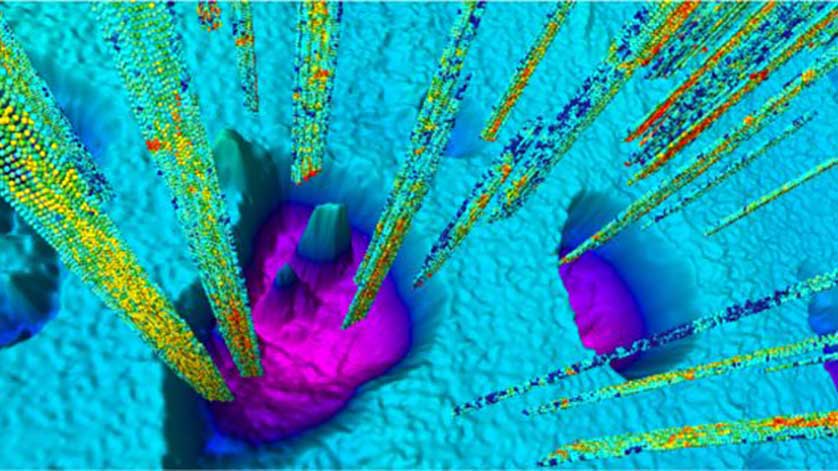 A new study in Science shows that hundreds of massive, kilometer –wide, craters on the ocean floor in the Arctic were formed by substantial methane expulsions.

Even though the craters were formed some 12,000 years ago, methane is still leaking profusely from the craters. Methane is a potent greenhouse gas, and of major concern in our warming climate.

“The crater area was covered by a thick ice sheet during the last ice age, much as West Antarctica is today. As climate warmed, and the ice sheet collapsed, enormous amounts of methane were abruptly released. This created massive craters that are still actively seeping methane” says Karin Andreassen, first author of the study and professor at CAGE Centre for Arctic Gas Hydrate, Environment and Climate at UiT The Arctic University of Norway.

A few of these craters were first observed in the 90-ties. But new technology shows that the craters cover a much larger area than previously thought and provides more detailed imaging for interpretation.

“We have focused on craters that are 300 meters to 1 kilometer wide, and have mapped approximately 100 craters of this size in the area. But there are also many hundred smaller ones, less than 300 meters wide that is” says Andreassen.

In comparison, the huge blow-out craters on land on the Siberian peninsulas Yamal and Gydan are 50-90 meters wide, but similar processes may have been involved in their formation.

The Arctic ocean floor hosts vast amounts of methane trapped as hydrates, which are ice-like, solid mixtures of gas and water.These hydrates are stable under high pressure and cold temperatures. The ice sheet provides perfect conditions for subglacial gas hydrate formation, in the past as well as today.

Some 2000 meters of ice loaded what now is ocean floor with heavy weight. Under the ice, methane gas from deeper hydrocarbon reservoirs moved upward, but could not escape. It was stored as gas hydrate in the sediment, constantly fed by gas from below, creating over-pressured conditions.

“As the ice sheet rapidly retreated, the hydrates concentrated in mounds, and eventually started to melt, expand and cause over-pressure. The principle is the same as in a pressure cooker: if you do not control the release of the pressure, it will continue to build up until there is a disaster in your kitchen. These mounds were over-pressured for thousands of years, and then the lid came off. They just collapsed releasing methane into the water column” says Andreassen.

Major methane venting events such as this appear to be rare, and may therefore easily be overlooked.

“Despite their infrequency, the impact of such blow-outs may still be greater than impact from slow and gradual seepage. It remains to be seen whether such abrupt and massive methane release could have reached the atmosphere. We do estimate that an area of hydrocarbon reserves twice the size of Russia was directly influenced by ice sheets during past glaciations. This means that a much larger area may have had similar abrupt gas releases in the overlapping time period” says Andreassen.

Another fact to consider is that there are reserves of hydrocarbons beneath the load of West Antarctica and Greenland ice sheets today.

“Our study provides the scientific community with a good past analogue for what may happen to future methane releases in front of contemporary, retreating ice sheets” concludes Andreassen.