Mapping and Scouting for Hydrothermal Vents in Gulf of California 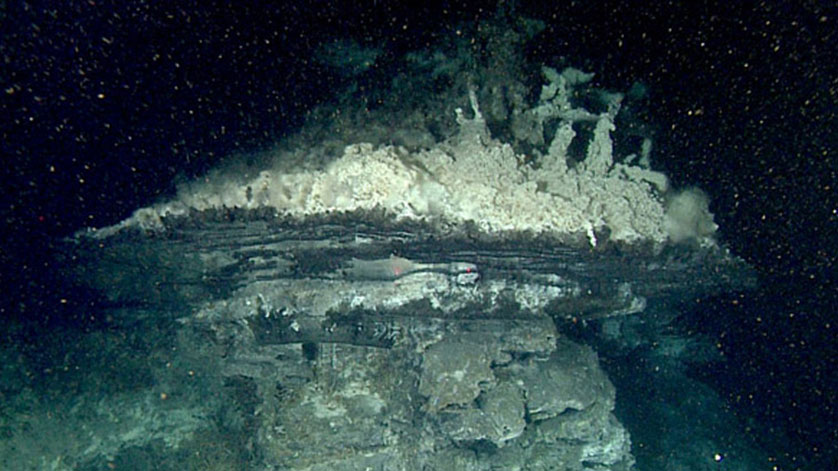 Almost 4,000 meters below the sea surface, in the southern Pescadero Basin, jagged ivory towers rise from the seafloor and emit hot shimmering fluid. They are the deepest known hydrothermal vents in the Gulf of California.

These deep-sea chimneys were discovered by MBARI scientists in 2015. The researchers call them the Auka vents. What’s intriguing is that these vents spew chemicals and host animals that are very different from those seen at Alarcón Rise, which is just 100 miles away.

On October 31, 2018, an interdisciplinary team of researchers embarked on a 21-day expedition on board the research vessel Falkor, operated by the Schmidt Ocean Institute. They will zoom in further on the Auka vents’ geology, chemistry, and biology, while continuing to look for more hydrothermal vents in the basin.

For David Caress, an MBARI geophysicist, returning to the Pescadero Basin will be especially exciting. “It will be fun to explore a place that I was involved in discovering,” he said. On this expedition, he will lead the seabed mapping team.

The Falkor carries a multibeam sonar that can make 50-meter resolution maps of the seafloor near the Auka vents. But this resolution isn’t good enough to reveal smaller features like hydrothermal chimneys.

To create more detailed maps, the same sonar technology will be deployed on an underwater robot designed by MBARI engineers and scientists, which will fly 50 meters (164 feet) above the seabed. Travelling at three knots, this autonomous underwater vehicle (AUV) can map an area about 250 meters (820 feet) wide and show features as small as a meter across. MBARI scientists made the 2015 discovery using the very same AUV. 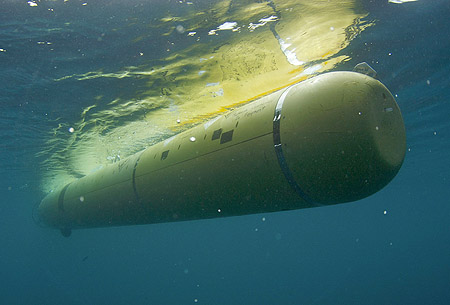 During this expedition, geologists will use the AUV to search for new vent fields elsewhere in the Pescadero Basin, particularly the unexplored waters of Northern Pescadero Basin.

While the AUV explores surrounding areas, a sophisticated sensor package, also designed by an MBARI team, will be used to make much finer, one-centimeter resolution maps of the Auka vents. Loaded onto a remote underwater vehicle (ROV SuBastian), this package combines acoustic and optical technologies—sonar, lidar, and high-resolution stereo cameras.

These three instruments work in tandem. Multibeam sonars work where lidars won’t, for example in muddy waters. And small soft animals on the seafloor, especially sea cucumbers and sponges can be mapped with lidar but not sonar, because sound waves don’t reflect off their bodies. The camera photos, on the other hand, allow scientists to identify and size the animals.

Although this powerful ocean imaging system wasn’t used during the 2015 surveys, Caress said that his team has been testing and tweaking the system for quite a few years off the California coast, and is excited to see the new maps that will be generated.

But doing the research 3,800 meters (12,500 feet) below the surface comes with its own challenges. “We are going really deep, on a ship we have never been on, using an ROV we have never used, and the likelihood of everything working at the first go is really small. It’s often hard, but things work out eventually,” said Caress.

The expedition consists of two legs. During the first leg, researchers will carry out centimeter-scale mapping of the Auka vents using the ROV, while also making meter-scale maps of unexplored areas using the AUV, to find new chimneys. If new vents are found, geologists on board will use the ROV to collect sediment and geology samples. They also plan to collect samples of the hot fluids coming from the vents. 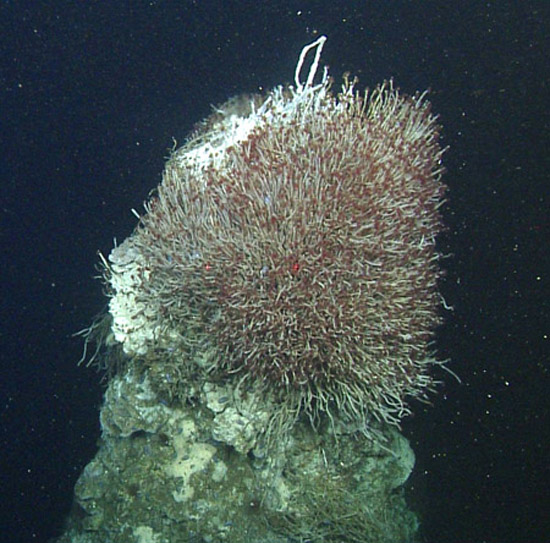 Tubeworms and other animals have colonized this chimney in the Pescadero Basin. Image: © 2015 MBARI

During the second leg, the focus will be on understanding the diversity, distribution, and metabolism of creatures living at and around the vent sites. Guided by the maps and photomosaics produced on the first leg, the biological team will explore the peculiar assemblages of tubeworms, polychaetes and chemosynthetic microbes residing there. The aim will be to compare the animals and microbes at different vent sites and link these to the chemical environments of the sites.

Such comprehensive research has the potential to advance our knowledge of the deep sea. And, with hydrothermal vents increasingly becoming a target of deep-sea mining, such interdisciplinary research may help identify areas that are unique and need protection.