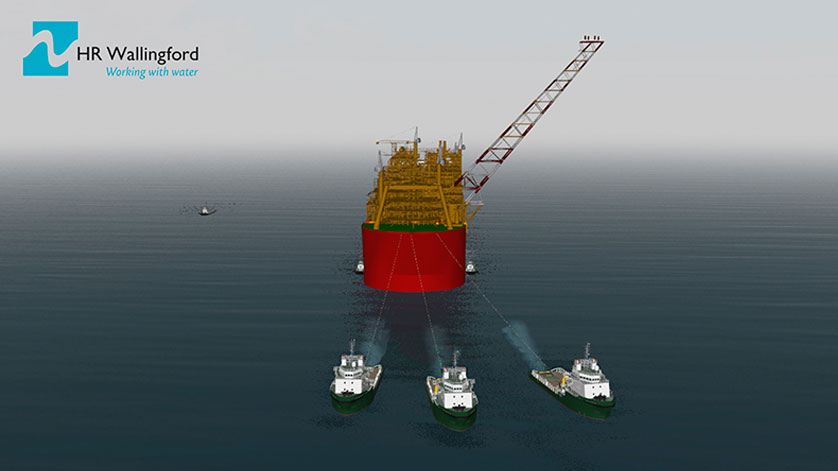 At 488m in length, and longer than four football pitches, Shell’s Prelude FLNG facility was always going to represent a formidable challenge even for the skilled tug masters who were charged with towing the facility from the shipyard in South Korea where it was constructed, and delivering it to its final destination, a remote gas field 475 kilometers off the coast of Western Australia.

But practice makes perfect, and HR Wallingford, using its Australia Ship Simulation Centre in Fremantle, W.A., created an accurate and detailed navigation simulation of Prelude for Shell, which was used to prepare the Tow Masters, Tug Masters and Pilots, allowing them to familiarise themselves with a realistic simulation of Prelude manoeuvres at sea. And on 25 July 2017, Prelude arrived safely at its destination in the East Browse Basin. 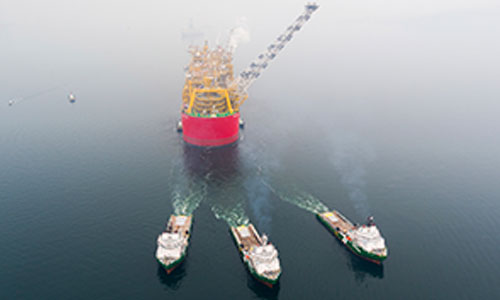 Photograph by Shell (right) of the Prelude tow with POSH tugs

HR Wallingford’s involvement in the project extends to the real-time navigation simulation for the facility’s departure from the Geoje Shipyard in Korea, along the Busan Channel; positioning and mooring Prelude once on site; conducting berthing and departure simulations of the LNG, LPG and condensate offtake tankers that will moor alongside the FLNG; and providing ongoing pilot and tug master training in the Australia Ship Simulation Centre in Fremantle. 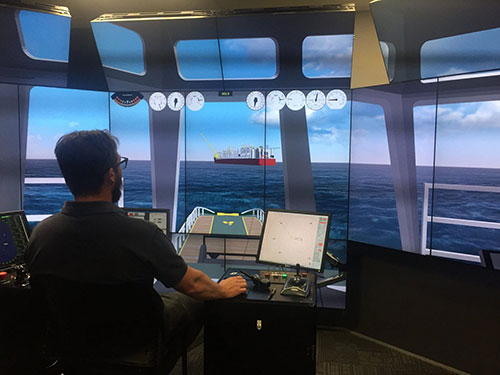 Dr. Mark McBride, HR Wallingford’s Ships Group Manager, said: “There was a need to assess many aspects of this unique offshore floating facility, which included the manoeuvring issues associated with the arrival and departure of the offtake LNG carriers. For this we used real time navigation simulation, so that we could identify the limiting conditions for safe manoeuvring, as well as the tug requirements, and for developing appropriate manoeuvring strategies.”

Up to six integrated simulators at the Australia Ship Simulation Centre were used to simulate the FLNG facility and the tugs for the shipyard departure operation, and for the positioning during connection of the FLNG’s mooring lines, once at its installation site. Actual wind, wave and tidal conditions were recorded, and then modelled, which meant that the crew were able to accurately test the capability and power of the tugs in advance. The simulated positioning operation was used to prepare for the real-life operation in which the tugs were attached to the FLNG facility by 700-metre-long wires, weighing approximately 30 tonnes each.

Captain Roy Lewisson, Master of the Deep Orient, the vessel that connected Prelude to its 16 mooring lines, and who took part in the simulator training said: “Being able to accurately test the manoeuvring beforehand was a real advantage. Never before in oil and gas history have we had the chance to practice in the simulator before we get on the water.”

The Prelude FLNG facility is expected to develop gas fields for the next 25 years, extracting natural gas from wells, which is liquefied and chilled to −162 °C. Offloading liquefied natural gas from large FLNG facilities provides a significant innovation, cutting costs and eliminating the need for long pipelines to onshore LNG processing plants.