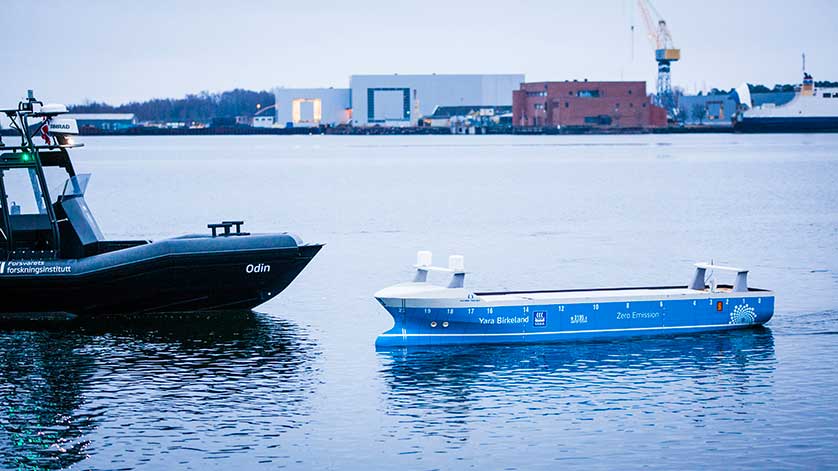 An official autonomous shipping test-bed was opened in Horten on December 6, on the coast of Norway. Established to support the growth in development of new solutions for autonomous maritime operations, the new area is open to both Norwegian and international organisations, and is designed to be a convenient, safe, non-congested space to trial new technology and vessels.

The area is specially designated for autonomous trials by the Norwegian Maritime Administration and the Norwegian Coastal Administration. Maritime autonomy pioneer KONGSBERG has worked closely with the town of Horten, DNV GL, FFI (Norwegian Defence Research Establishment) and the University College of South East Norway, to establish the new test-bed, which is situated adjacent to Kongsberg Maritime’s Horten facility.

Building on Norway’s leading position within the burgeoning autonomous shipping segment, the test-bed is the third of its kind in the country and only the fourth such approved area in the world. Its introduction follows the opening of the world’s first autonomous shipping test-bed in September 2016, which was supported by KONGSBERG and located on the Trondheimsfjord in Norway.

The test-beds in Trondheim and Horten are an important resource for KONGSBERG’s on-going development of technology for ground-breaking projects such as the YARA Birkeland all electric, autonomous container ship, the Hrönn, autonomous offshore support vessel and marine robotics technology. These and other autonomous vessel projects are set to transform many aspects of shipping and offshore operations, by introducing safer, more environmentally friendly and cost-effective modes of transport and working at sea.

KONGSBERG’s use of the fjord at Horten for safe autonomous vessel testing during 2017 has been integral to the area receiving its official status as a test-bed. In August, KONGSBERG and FFI demonstrated high-speed autonomous obstacle avoidance using the ODIN Unmanned Surface Vehicle (USV) fitted with the cutting-edge K-Mate autonomy controller solution. In November, the GEBCO-NF Alumni Team’s entry to the $7 Million Shell Ocean Discovery XPRIZE underwent Technology Readiness Tests in the area. The team’s unique SEA-KIT USV/AUV concept uses the K-Mate solution for surface navigation and tracking of a KONGSBERG HUGIN AUV.

“With critical developments in maritime autonomy technology and software taking place at Kongsberg Maritime in Horten, the location of the new test-bed will support a number of ground-breaking technology projects,” said Egil Haugsdal, President, Kongsberg Maritime. “The move towards greater autonomy at sea has the potential to transform maritime operations and while the technology has now been proven, we look towards the regulations. Establishment of these test-beds are an important step, as it shows close co-operation between the people making the technology and vessels and the organisations developing the rules that will allow them to operate.”