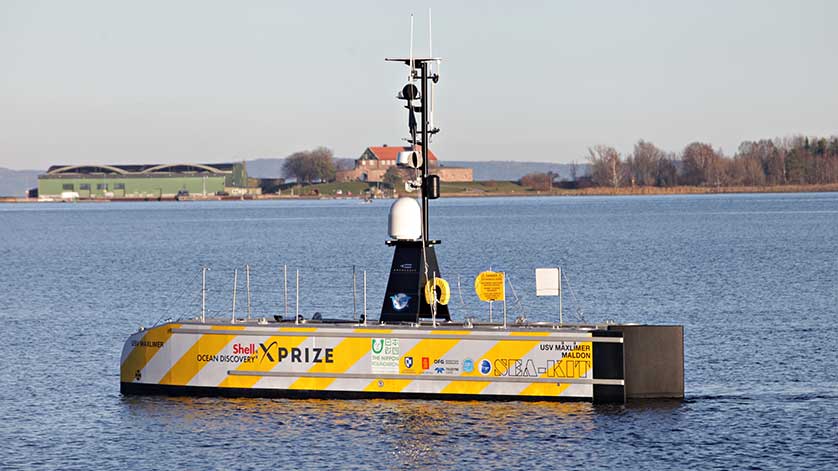 The test event was held on the fjord outside KONGSBERG’s factory in Horten, Norway on Thursday 23rd November.

All Shell Ocean Discovery XPRIZE teams will hold testing site visits around the world for Round 1, which starts in November and continues until February 2018. XPRIZE officials in attendance at each test site will gather data on the teams’ performance, which will be assessed against 11 key measurement criteria. All teams that meet these criteria will progress to the next round of field tests, with an announcement expected in March 2018. The assessment criteria have been designed to assess whether teams would have been capable of passing the originally planned Round 1 field tests, which were cancelled due to severe hurricane damage in Puerto Rico.

The Shell Ocean Discovery XPRIZE is a global competition challenging teams to advance deep-sea technologies for autonomous, fast and high-resolution ocean exploration. The prize will stimulate even greater exploration and mapping of the ocean floor, helping to uncover our planet’s greatest wonders and resources for the benefit of humanity.

The GEBCO-NF Alumni Team’s concept utilises a SEA-KIT unmanned surface vessel, USV Maxlimer. The SEA-KIT vessel has been built by Hushcraft in the UK. USV Maxlimer performed faultlessly during the Technology Readiness Tests event, where the team demonstrated the USV’s unique ability to launch and recover a KONGSBERG HUGIN AUV, and track it accurately on the surface during subsea survey operations.

The autonomous navigation and AUV tracking capabilities of the USV are possible through the integration of the KONGSBERG & Hushcraft custom developed automation and software configuration in conjunction with KONGSBERG’s K-MATE common autonomous control engine. K-MATE will also be used by several unmanned and autonomous vessels delivered by Kongsberg Maritime, including the fully electric container feeder; YARA Birkeland. The autonomy controller has been developed in a collaboration between Kongsberg Maritime and FFI, the Norwegian Defence Research Establishment, and builds on the HUGIN AUV System.

The GEBCO-NF Alumni Team is led by alumni of The Nippon Foundation / General Bathymetric Chart of the Oceans (GEBCO) Postgraduate Certificate in Ocean Bathymetry Training Programme, now in its fourteenth year, run at the Centre for Coastal and Ocean Mapping at the University of New Hampshire. GEBCO is the only organisation with a mandate to map the entirety of the world’s ocean floor. The GEBCO-NF Alumni Team has worked very closely with advisors, industry partners, technology suppliers and developers over the last year, so that the Team is now a truly international group of remarkable diversity representing thirteen countries. The partnership with The Nippon Foundation, led by Chairman, Mr Yohei Sasakawa, provided more than 3 million US dollars for the Team’s concept to be developed. This funding provided the rare opportunity for researchers and commercial groups to work together towards a common goal – developing the tools to autonomously map the seafloor.

Rochelle Wigley, Director of the Nippon Foundation / GEBCO training program at the Center for Coastal and Ocean Mapping at the University of New Hampshire noted: “It’s rewarding to see alumni of diverse backgrounds using the skills, networks and experiences gained through the training program to rise to all of the challenges of this competition, and to work so closely and productively with the industry partners and technology suppliers. It is because of this hard work and collaboration that the team performed so well in the Technology Readiness Tests.”

Yulia Zarayskaya, one of the training program alumni and data group lead said: “The interaction between alumni and industry partners led to exciting developments in the data processing work flow, but also introduced alumni to world leaders in the field and this networking is invaluable.”

Bjørn Jalving, EVP Subsea, Kongsberg Maritime added: “We have been working closely with the GEBCO-NF Alumni Team since USV Maxlimer arrived in Horten in September, to ensure we were 100% ready for the Technology Readiness Tests. Together with the GEBCO-NF Alumni Team, we have been able to show the amazing potential of the USV / AUV concept as a next generation, long-range, long-endurance ocean capability. USV Maxlimer is able to operate safely and effectively without assistance for months at a time in open waters.”

The HUGIN AUV, ‘Chercheur’ deployed by the SEA-KIT USV is owned and operated by Ocean Floor Geophysics (OFG). It is one of the best equipped survey and pipeline inspection AUVs in the world, with HISAS interferometric synthetic aperture sonar, multibeam, sub-bottom profiler, OFG Self-Compensating Magnetometer, water chemistry sensors, acoustic modem, and a state-of-the-art positioning system.

Matthew Kowalczyk, CEO of Ocean Floor Geophysics commented: “The range of challenges in developing new technology and ways of extracting more out of existing technology matches the R&D goals of OFG, where the OFG team members have a combination of experience, knowledge and flexibility to tackle any challenge put to them and to ensure that a solution is achieved that is commercially viable. Providing key AUV operations experience and working within this diverse group to integrate the various sub-systems into a complete USV / AUV system is exactly how OFG operates best; as part of a team developing and deploying leading-edge subsea mapping and inspection technologies.”

The GEBCO-NF Alumni Team’s data processing solution utilizes Teledyne Caris components and the development work to meet the requirements of the Shell Ocean Discovery XPRIZE has been undertaken with assistance from Teledyne CARIS.