IPCC: Future of Ocean and Cryosphere Depends on Critical Choices being Made Now 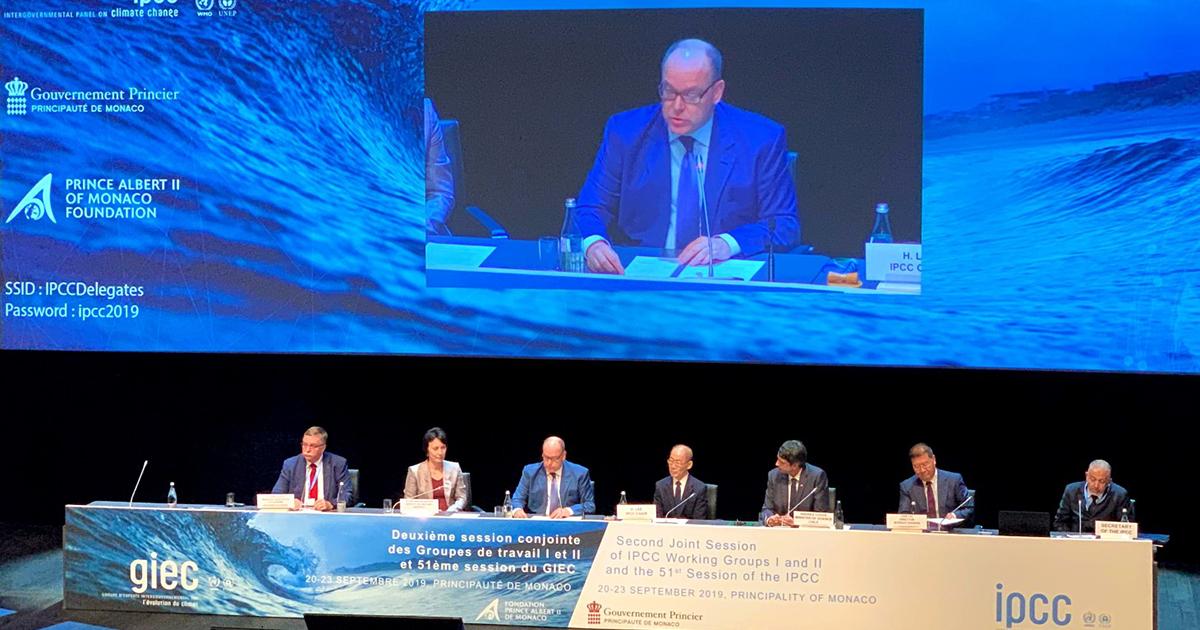 The latest Intergovernmental Panel on Climate Change (IPCC) Special Report, published 25 September 2019, highlights the urgency of prioritizing timely, ambitious and coordinated action to address unprecedented and enduring changes in the ocean and cryosphere.

The Institute of Marine Engineering, Science & Technology (IMarEST), holding the privileged position of Observer Status at the IPCC, was in attendance at the 51st Session of the IPCC to approve the report, held in the Principality of Monaco from 20-23 September 2019. They summarized the session as follows.

The session saw scientists and policymakers from the 195 IPCC member governments refining the Summary for Policymakers (SPM) of the Special Report on the Ocean and Cryosphere in a Changing Climate (SROCC), and then formally approving this and the underlying full report, which has been published today.

The SROCC report represents the work of 104 scientists from 36 countries, referencing nearly 7,000 publications, and receiving a total of 31,176 comments from expert reviewers and governments in 80 countries. Here is a brief synopsis with comment from the IMarEST delegation present.

The report initially confirms and corroborates the findings of the 3rd Ocean State Report, recently published in the IMarEST’s Journal of Operational Oceanography. The planet has witnessed significant climatic changes since pre-industrial times and the SROCC highlights considerable warming of the ocean, not just at its surface but also extending down to great depths with a greater prevalence of marine heatwaves.

Ongoing loss off oceanic oxygen and acidification are further described, alongside sea level rises that are stated to have been accelerating in recent decades due to increasing loss of ice from the Greenland and Antarctic ice sheets at rates of 278mm ± 11 yr-1 and 155mm ± 19 yr-1 respectively.

Whilst detrimental impacts on ecosystems and human have already been witnessed the report elaborates on the effects on the abundance and distribution of ecologically, culturally and economically important animal and plant species.

Geographical shifts of marine species ranging from plankton and fish to mammals and seabirds have been occurring at alarming rates as a result of ocean warming with estimated range shifts of 52± 33km decade-1 (some plant groups) and 29± 16km (some animal groups) since the 1970s. This has already resulted in reduced ecosystem functioning and altered ecosystem structures.

Shallow coastal ecosystems are confirmed to be under huge strain, with the report detailing a 50% decline in wetlands coverage over the 20th century. Seagrass meadows and kelp forests have also been hit hard.

Expanding on the grim tidings portrayed by the observations up to the current day, the SROCC delivers the IPCC’s projected changes in the future ocean system. The cutting edge scientific research delivers still more saddening outlook, as the pattern of warming seen since the 1970s is likely to continue. Further loss of Arctic sea ice, deoxygenation, increased acidification and a heightened frequency of marine heatwaves are some of the notable consequences that can be expected by the turn of the century.

Further sea level rise is an apparent inevitability, with the previous figures cited by the IPCC under their fifth assessment cycle report (AR5) guidance released in 2010 being revised upwards due to a larger than expected contribution from the Antarctic ice sheet. Coastal wetlands could be all but wiped out by the turn of the century, with a global loss of 20-90% predicted by 2100.

Such a dire outlook will undoubtedly have extensive impacts for the planet and for modern-day human life, with physical risks to low-lying coastal communities in cities, small islands and other regions.. All types of responses to sea level rise such as protection and ecosystem-based adaption will have a role to play in an integrated and sequenced response to rising sea levels.

However, vulnerable communities, especially those in coral reef and polar environments will face adaption limits well before the end of the century – even under a low greenhouse gas emission pathway. Without major adaptation, flood damage every year can be expected to increase by two to three orders of magnitude by the turn of the century.

The consequences for human livelihoods and wellbeing will be further exacerbated by the decreases in abundance, distribution shifts of species and depleted fish catches. Global-scale biomass of marine animals is projected to drastically decrease by 15.0+/-5.9%, with maximum catch potential of fisheries decreasing by 20.5-24.1% by 2100 under a high-emissions scenario – 3-4 times larger than a low-emissions scenario, placing significant strain on incomes and food security.

“The SROCC brings together in one place a view of profound changes taking place and their potential consequences. Unless rapid action is taken to reduce greenhouse gas emissions, it paints a bleak picture. In the absence of concerted action, the changes taking place have enormous consequences for the ocean, and by extension, the Earth as a whole. From the loss of coral reefs and the rise of sea levels to ocean deoxygenation, the ocean is at a tipping point. The report is a clear call for us to act on climate change before it is too late for the ocean and for all life on earth.” Prof. Ralph Rayner FIMarEST, Co-Chair of the IMarEST Special Interest Group on Operational Oceanography and Editor of the IMarEST's Journal of Operational Oceanography.

While making for a sobering read, the report injects some optimism with a discussion on the viable options for best mitigating the climatic effects and preserving the marine and cryosphere ecosystems. The development of extensive networks of protected areas is suggested as a means to help maintain existing ecosystem services and facilitate the poleward and altitudinal movements of populations, species and ecosystems – shifts already occurring in response to sea-level rise and global warming.

However, the SROCC warns that while effective, the cost of coastal habitat restoration will be considerable, ranging from thousands to hundreds of thousands of US$ per hectare and that its effectiveness will be limited to low emission scenarios.

Such strategies can be supported by well-managed coastal blue carbon ecosystems like seagrass meadows, mangroves and tidal marshes that will provide coastal protection and support fisheries. However, again, the effectiveness of such strategies is modest, with their global potential likely to only offset <2% of current emissions.

The report concludes with a plea for the critically urgent, ambitious and coordinated implementation of low-emission pathways and adaptation actions to reduce the climatic impact on the ocean and cryosphere.

“The SROCC presents a very worrying prognosis for the health of our future oceans and the planet. It is imperative that we take immediate action and respond to these stark warning signs and implement robust, sustainable and collaborative plans to mitigate the consequences of climate change as best as we can before it is too late. The global membership of the IMarEST has a significant role to play. Addressing the issues highlighted by the SROCC will require the most competent, ethical and committed professional engineers, scientists, technologists and policymakers to work together, across disciplines, across divisions of age, experience and gender and across political and geographical boundaries. The IMarEST is uniquely placed to support the marine profession to rise this tremendous challenge."Dr Bev Mackenzie, Technical & Policy Director, IMarEST.