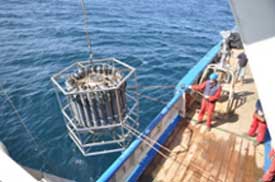 In recent decades, European environmental policy has aimed to improve water quality through the reduction of nitrogen and phosphorus loads in surface waters. The measures taken were much more effective at the removal of phosphorus than nitrogen, resulting in a large imbalance of these two nutrients. Scientists from the University of Amsterdam (UvA) and the NIOZ Royal Netherlands Institute for Sea Research (NIOZ), led by Prof. Jef Huisman, have now demonstrated that the unbalanced nutrient reduction has caused a major shortage of phosphorus in coastal waters of the North Sea.

Nitrogen and phosphorus are essential building blocks for life. Historically, the concentrations of these nutrients have shown major changes in surface waters. Due to intensified agriculture and the use of phosphate additives in detergents, the input of nitrate and phosphorus sharply increased between the 1960s and 1980s, which resulted in harmful algal blooms, anoxia and fish kills in lakes and coastal waters. In recent decades, policy measures have been implemented to reduce the discharge of nutrients, but the overall reduction of nutrients was much more successful for phosphorus than for nitrogen.

Samples being taken from the research ship Pelagia in the North Sea (photo: Maayke Stomp, UvA)

Severe shortage of phosphorus
The North Sea is a prime example of a coastal zone experiencing pronounced shifts in nutrient inputs. During a series of research cruises, scientists from the UvA and the NIOZ discovered that this has created an imbalance of nitrogen (N) and phosphorus (P) in North Sea waters. UvA researcher Amanda Burson explains: ‘Generally, the N:P ratio in sea water rarely exceeds 20:1; however, in the coastal waters of the North Sea we now measure sky-high values of up to 375:1. As a result, algae in the North Sea experience a severe shortage in phosphorus.’

The researchers confirmed this by on-deck experiments, where small supplements of phosphorus caused explosive growth of algae. Not all species, however, showed similar responses. The good news is that foam-producing algae grow less well under phosphorus limitation. Unfortunately, the experiments indicate that dinoflagellates, some of which are potentially toxic and bloom-forming species, may profit from decreasing levels of phosphorus. Furthermore, the phosphorus content of the algae themselves was extremely low. According to Burson, algae from the North Sea therefore form a poor nutrient diet for zooplankton and shellfish, although the impact on higher trophic levels in the food web is still unknown.

Remedial action needed
These findings show that, beside climate change and intensified fishing, an increasing shortage of phosphorus is an under-studied but emergent stressor for coastal waters such as the North Sea. If current trends continue, the shortage of phosphorus in coastal waters will become even more pronounced. The researchers warn that this can endanger the carrying capacity and functioning of coastal waters. ‘It is crucial to restore the balance between nitrogen and phosphorus loads in order to sustain our coastal ecosystems’, says Jef Huisman, professor of Aquatic Microbiology. ‘This can be achieved by putting a halt to the drastic removal of phosphorus and combining this measure with a more effective reduction of nitrogen from surface waters.’
Publication details
Burson A, Stomp M, Akil L, Brussaard CPD & Huisman J. 2016. Unbalanced reduction of nutrient loads has created an offshore gradient from phosphorus to nitrogen limitation in the North Sea. Limnology & Oceanography (in press). doi: 10.1002/lno.10257

This research was funded by the national program Sea and Coastal Research (ZKO) of the Netherlands Organization for Scientific Research (NWO).