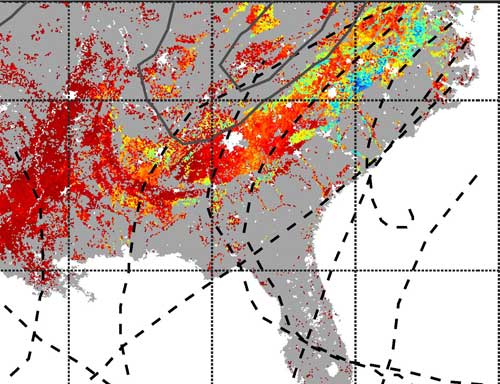 While hurricanes are a constant source of worry for residents of the southeastern United States, new research suggests that they have a major upside—counteracting global warming.

Previous research from Duke environmental engineer Ana Barros demonstrated that the regular landfall of tropical cyclones is vital to the region’s water supply and can help mitigate droughts.

Now, a new study from Barros reveals that the increase in forest photosynthesis and growth made possible by tropical cyclones in the southeastern United States captures hundreds of times more carbon than is released by all vehicles in the U.S. in a given year.

This map shows the total increase of photosynthesis and carbon uptake by forests caused by all hurricanes in 2004. The dotted gray lines represent the paths of the individual storms.

The study was published online on April 20, 2016, in the Journal of Geophysical Research - Biogeosciences.

“Our results show that, while hurricanes can cause flooding and destroy city infrastructure, there are two sides to the story,” said Barros, the James L. Meriam Professor of Civil and Environmental Engineering at Duke University. “The other side is that hurricanes recharge the aquifers and have an enormous impact on photosynthesis and taking up carbon from the atmosphere.”

In the study, Lauren Lowman, a doctoral student in Barros’s laboratory, used a hydrological computer model to simulate the ecological impacts of tropical cyclones from 2004-2007. The earlier years of that time period had a high number of tropical cyclone landfall events, while the latter years experienced relatively few.

By comparing those disparate years to simulations of a year without tropical cyclone events, Lowman was able to calculate the effect tropical cyclones have on the rates of photosynthesis and carbon uptake in forests of the southeastern United States.

“It’s easy to make general statements about how much of an impact something like additional rainfall can have on the environment,” said Lowman. “But we really wanted to quantify the amount of carbon uptake that you can relate to tropical cyclones.”

According to Barros and Lowman, it is difficult to predict what effects climate change will have on the region’s future. Even if the number of tropical cyclones that form in the Atlantic increases, that doesn’t guarantee that the number making landfall will also rise. And long-term forecasts for the region’s temperature and rainfall currently show less change than normal year-to-year variability. 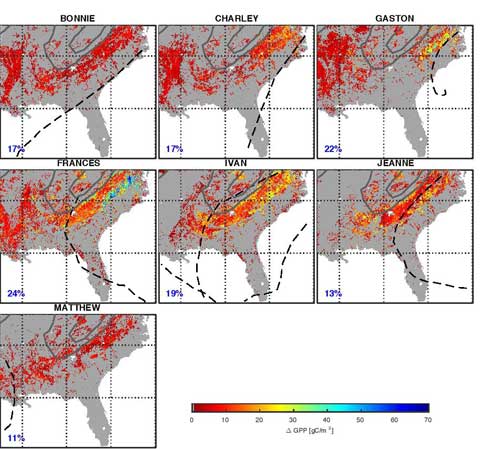 Each map shows the increased levels of photosynthesis and carbon uptake by forests caused by individual hurricanes in 2004. The dotted gray lines represent the paths of the storms.

But no matter what the future brings, one thing is clear—the regularity and number of tropical cyclones making landfall will continue to be vital.

“There are a lot of regional effects competing with large worldwide changes that make it very hard to predict what climate change will bring to the southeastern United States,” said Barros. “If droughts do become worse and we don’t have these regular tropical cyclones, the impact will be very negative. And regardless of climate change, our results are yet one more very good reason to protect these vast forests.”

This research was funded in part by the National Science Foundation Coupled Human and Natural Systems Program (CNH-1313799) and an earlier grant from the National Oceanic and Atmospheric Administration (NA08OAR4310701).