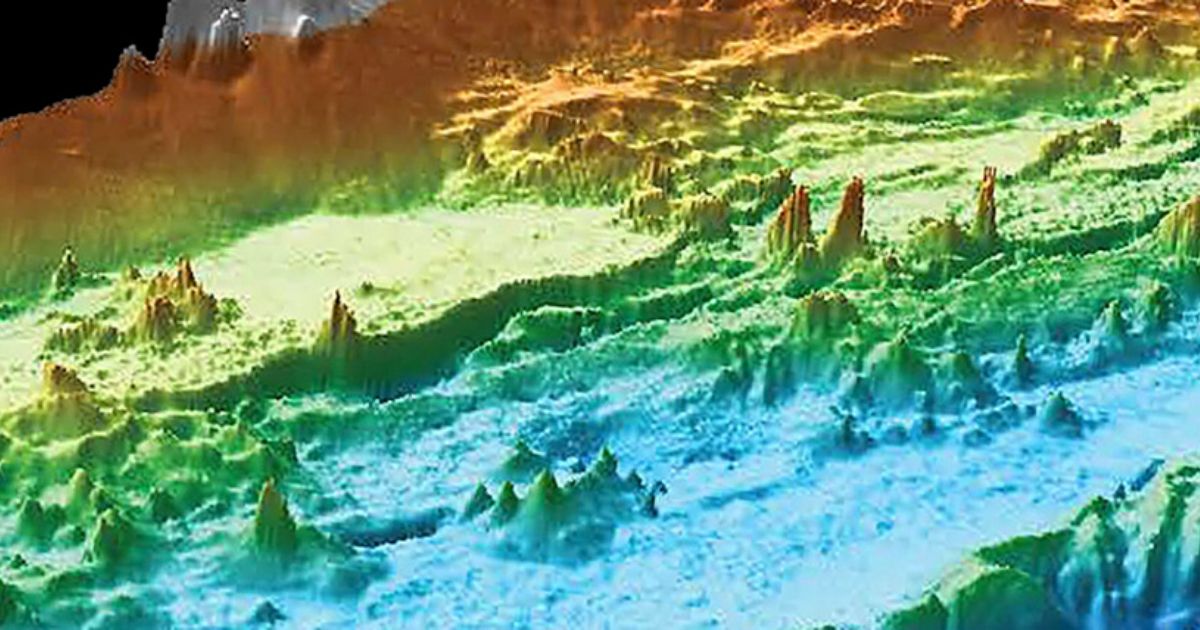 This computer-generated view of the seafloor shows just a few of the hundreds of hydrothermal chimneys in the Endeavour hydrothermal vent field. Image: © 2020 MBARI

At the Endeavour Segment of the Juan de Fuca Ridge, about 350 kilometers (220 miles) northwest of Washington State, the seafloor is ripping apart.

Magma beneath the seafloor heats water within the surrounding bedrock, which emerges from the seafloor in the form of underwater seeps and geysers known as hydrothermal vents. When this superheated, mineral-rich water comes in contact with near-freezing seawater, the dissolved minerals crystalize, creating a wonderland of spires and hydrothermal chimneys up to 25 meters (80 feet) tall.

Marine geologists and biologists have studied Endeavour hydrothermal vent field since 1982 using human-occupied submersibles and underwater robots. Early on, they discovered that the field was very active, with lots of vents and chimneys. But because of the difficult access, total darkness, and murky water, no one had ever mapped all the vents in this area or even determined how many existed. But a recent paper by MBARI geologists and collaborators shows that there are almost 600 chimneys in this area. 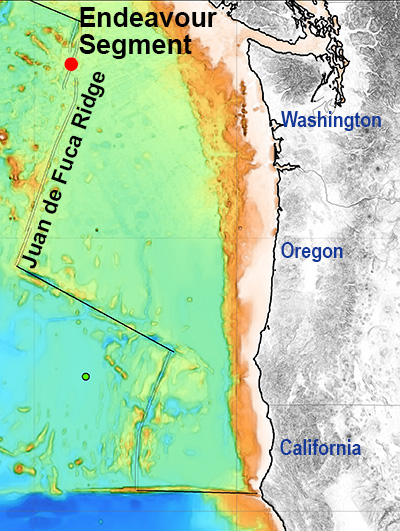 The Endeavour Segment of the Juan de Fuca Ridge is an active volcanic area far off the coast of the Pacific Northwest. Image: © 2020 MBARI

The Endeavour vents are all located in a long, narrow valley about 14 kilometers (8.6 miles) long and 1.5 kilometers (0.9 miles) wide. Before this study, scientists from the US and Canada had named about 47 active hydrothermal vents, most of which lie within five major vent fields. They gave these vent fields fanciful names such as Mothra, Salty Dawg, and Sasquatch. They also discovered that this region not only had vast numbers of chimneys, but also had some of the tallest hydrothermal chimneys known on any mid-ocean ridge in the world. The tallest of these chimneys, “Godzilla,” reached a height of 45 meters (150 feet) before it toppled over in 1995.

Over the years, the Endeavour hydrothermal vent fields were mapped using sonar on ships and underwater robots. However, none of these surveys had high enough resolution to detect individual chimneys over large areas of seafloor. It was not until MBARI’s autonomous underwater vehicle (AUV) D. Allan B. mapped the area at about 1.25-meter (4-foot) resolution that geologists were able to see the huge number of chimneys in this area, many of which were located outside known active vent fields.

MBARI researchers were able to achieve this feat by flying D. Allan B. just 50 meters (160 feet) over the rugged seafloor during seven surveys in 2008 and 2011. Overall, the AUV completed 140 hours of dives and mapped about 62 square kilometers (24 square miles) of the seafloor. MBARI researchers searched through the data from the AUV to identify all chimneys taller than three meters (the minimum height that could be reliably separated from background topography). They were amazed to find 572 chimneys. Many of the newly discovered chimneys were close to vent sites that had been studied for decades. 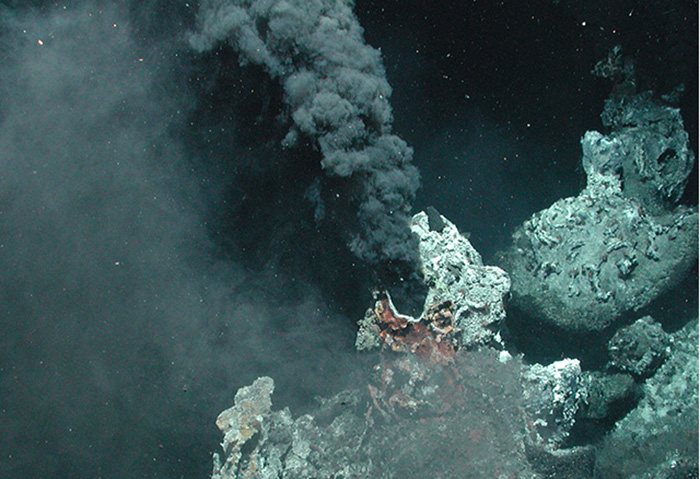 Black smokers” such as this one in the Endeavour vent field, belch superheated fluids at over 300 degrees Centigrade (570 degrees Fahrenheit) into the surrounding seawater. Such active hydrothermal vents form chimneys that can grow to over 30 meters (100 feet) tall. Image: © 2002 MBARI.

As David Clague, the lead author on the new paper, explained, “It’s very hard to see down there because all the particulates in the water create a kind of haze. I remember there was one well-studied chimney where the composition of the fluids seemed to vary from one research dive to the next. It wasn’t until we did our detailed mapping that people realized they had actually been sampling at two different chimneys. They apparently would encounter one chimney or the other depending on what direction they approached the site.”

MBARI’s mapping effort revealed many large, and presumably active, chimneys, the tallest being at least 27 meters (90 feet) high. But the majority of the chimneys were smaller—less than eight meters (26 feet) high—and the researchers believe many are inactive (no longer releasing fluids).

Active chimneys typically form where superheated water (over 300 degrees Centigrade; 570 degrees Fahrenheit) flows up through cracks in the seafloor. If this flow is strong and lasts long enough, the chimney may grow taller and taller until it becomes unstable and topples over. However, many seafloor cracks and chimneys become clogged by mineral deposits. At this point, the chimney becomes inactive and stops growing, but may remain standing for hundreds of years. Meanwhile, the fluids from the clogged chimney find their way upward through different cracks in the seafloor to form new chimneys nearby.

To figure out what makes the Endeavour Segment unique, the researchers compared the types of chimneys at Endeavour with those found at the Alarcón Rise (near the south end of the Gulf of California), another spreading center that MBARI has mapped in detail. They found that the Endeavour Field had many more chimneys, but a lower proportion of active chimneys.

Clague and his coauthors suggest that the Endeavour Segment has lots of inactive chimneys because, over the last several thousand years, this area has only had a few small volcanic eruptions, and the lava from these eruptions did not bury the chimneys. In contrast, at the Alarcón Rise, large amounts of lava have erupted from the seafloor, burying or destroying older chimneys, so only the youngest and most active chimneys remain. 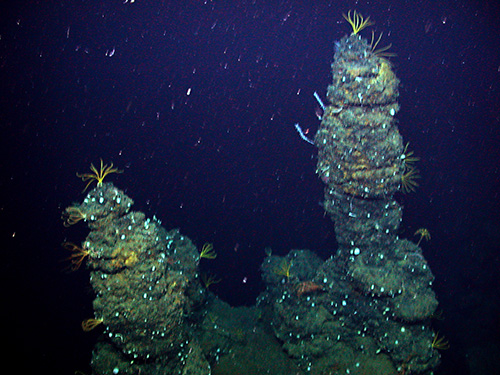 When superheated fluids stop flowing from a hydrothermal chimney, the chimney becomes inactive, but may remain standing for hundreds of years. Image: © 2004 MBARI

Based on their work at Endeavour and other mid-ocean ridges, the researchers propose that these ridges may go through three phases of evolution:

A magmatic phase, lasting up to tens of thousands of years, when large amounts of magma erupt and cover the seafloor with lava.

A tectonic phase, lasting perhaps 5,000 years, when the magma supply slows, and the seafloor cools and contracts, while spreading continues deeper in the crust. During this phase, the axial valley sinks, and numerous cracks and faults form in the seafloor.

The researchers think that the Endeavour area has been in a hydrothermal phase for about the last 2,000 years. However, they suspect it may be entering a new magmatic phase, which means that the area could see more volcanic eruptions in the future. When this happens, many of the chimneys they mapped will be buried under new lava flows, and the fractured rocks that currently allow substantial amounts of fluid to rise to the surface will be mostly sealed.

Meanwhile, geologists studying the Endeavour Segment will be able to use MBARI’s new maps to plan their research dives and decide where to put monitoring equipment on the seafloor.

Data from MBARI’s mapping effort has also been used by collaborators at the University of Ottawa and GEOMAR to estimate the volume and mass of the hydrothermal deposits in the Endeavour chimneys. Such estimates are critical for understanding the distribution of metal-rich rocks at hydrothermal vents, some of which have been targeted for deep-sea mining. However, seafloor mining is unlikely within the Endeavour vent fields. In 2003, the government of Canada declared the active vent sites and nearby areas a marine-protected area.