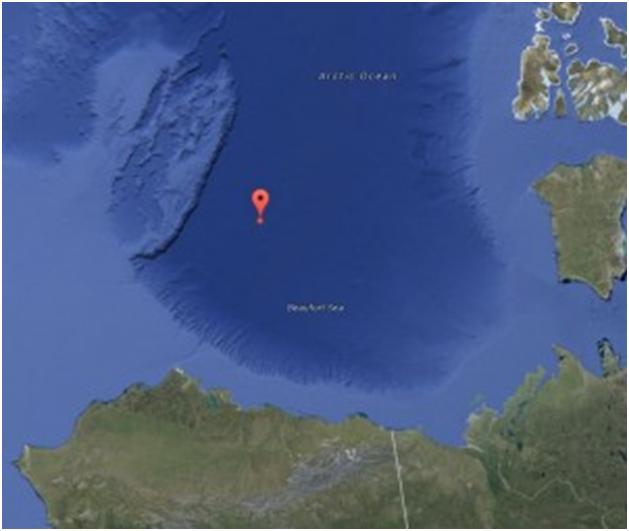 As the climate warms and sea ice retreats, the North is changing. An ice-covered expanse now has a season of increasingly open water that is predicted to extend across the whole Arctic Ocean before the middle of this century. Storms thus have the potential to create Arctic swell – huge waves that could add a new and unpredictable element to the region.

“Swell and sea in the emerging Arctic Ocean“ A University of Washington researcher made the first study of waves in the middle of the Arctic Ocean, and detected house-sized waves during a September 2012 storm. The results were recently published in Geophysical Research Letters.  “As the Arctic is melting, it’s a pretty simple prediction that the additional open water should make waves,” said lead author Jim Thomson, an oceanographer with the UW Applied Physics Laboratory. His data show that winds in mid-September 2012 created waves of 5 meters (16 feet) high during the peak of the storm. The research also traces the sources of those big waves: high winds, which have always howled through the Arctic, combined with the new reality of open water in summer.

Arctic ice used to retreat less than 100 miles from the shore. In 2012, it retreated more than 1,000 miles. Wind blowing across an expanse of water for a long time creates whitecaps, then small waves, which then slowly consolidate into big swells that carry huge amounts of energy in a single punch. The size of the waves increases with the fetch, or travel distance over open water. So more open water means bigger waves. As waves grow bigger they also catch more wind, driving them faster and with more energy.

Shipping and oil companies have been eyeing the opportunity of an ice-free season in the Arctic Ocean. The emergence of big waves in the Arctic could be bad news for operating in newly ice-free Northern waters. “Almost all of the casualties and losses at sea are because of stormy conditions, and breaking waves are often the culprit,” Thomson said.

It also could be a new feedback loop leading to more open water as bigger waves break up the remaining summer ice floes. “The melting has been going on for decades. What we’re talking about with the waves is potentially a new process, a mechanical process, in which the waves can push and pull and crash to break up the ice,” Thomson said. The 2012 measurement was made in deep water in the Beaufort Sea north of Alaska. Waves breaking on the shore could also affect the coastlines, where melting permafrost is already making shores more vulnerable to erosion. The observations were made as part of a bigger project by a sensor anchored to the seafloor and sitting 50 meters (more than 150 feet) below the surface in the middle of the Beaufort Sea, about 350 miles off Alaska’s north slope and at the middle of the ice-free summer water. It measured wave height from mid-August until late October 2012.

Satellites can give a rough estimate of wave heights, but they don’t give precise numbers for storm events. They also don’t do well for the sloppy, partially ice-covered waters that are common in the Arctic in summer. Warming temperatures and bigger waves could act together on summer ice floes, Thomson said: “At this point, we don’t really know relative importance of these processes in future scenarios.” Establishing that relationship could help to predict what will happen to the sea ice in the future and help forecast how long the ice-free channel will remain open each year. 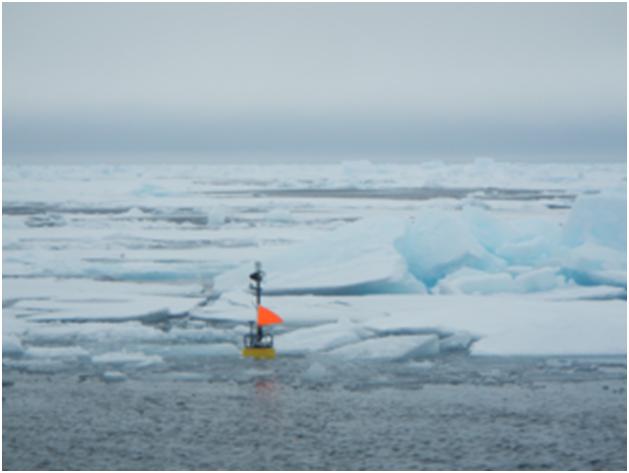 The recent paper recorded waves at just one place. This summer Thomson is part of an international group led by the UW that is putting dozens of sensors in the Arctic Ocean to better understand the physics of the sea-ice retreat. “There are several competing theories for what happens when the waves approach and get in to the ice,” Thomson said. “A big part of what we’re doing with this program is evaluating those models.”

He will be out on Alaska’s northern coast from late July until mid-August deploying sensors to track waves. He hopes to learn how wave heights are affected by the weather, ice conditions and amount of open water. “It’s going to be a quantum leap in terms of the number of observations, the level of detail and the level of precision” for measuring Arctic Ocean waves, Thomson said.

The other author is W. Erick Rogers at the Naval Research Laboratory. The research was funded by the U.S. Office of Naval Research.