How Methane Creates Hills and Pits in the Seafloor off Taiwan 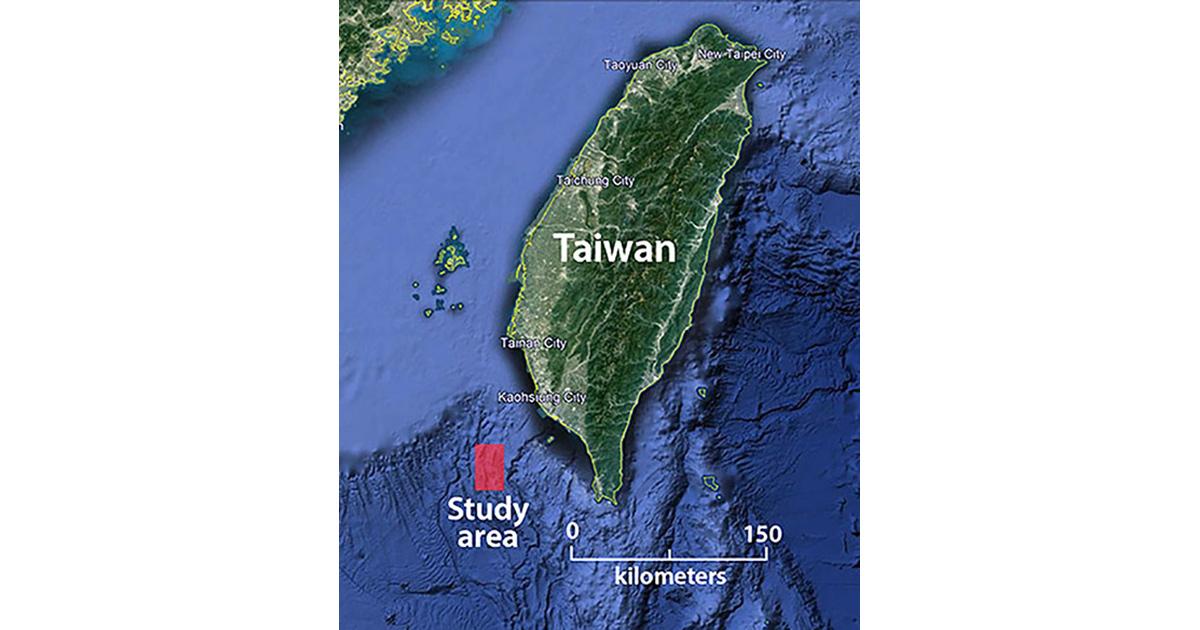 For decades marine geologists have been puzzled by mysterious hills and holes on the deep seafloor.

Aside from fascinating geologists, such features could indicate areas where the seafloor is unstable and might pose a threat to pipelines or other human structures on the seafloor. Research led by MBARI geologist Charles Paull has shown that many of the features are formed by natural gas (methane) within seafloor sediments. A new research paper in Geo-Marine Letters provides details on how these features may have formed off the coast of Taiwan.

Sixteen years ago, Paull conducted his first study of the underwater mounds sometimes known as “submarine pingos” on the Arctic Ocean seafloor off Canada. (Pingo is an Inuit word for small, round hills that are common on land in Northern Canada.) Since then Paull’s research team has studied these and related features off the coasts of California, Maine, Canada, Norway, and Taiwan.

Both pingos and pits or pockmarks are believed to be caused by methane, which is common in seafloor sediments on continental margins. Where methane exists within the sediment, it often causes changes in the shape of the seafloor, including creating pits and pockmarks, submarine pingos, and sometimes even mud volcanoes. Areas of active methane seepage may also support mats of bacteria and communities of specialized seafloor animals.

The new paper is based on extremely detailed seafloor surveys conducted off the coast of Taiwan in 2013 and 2017 by researchers from National Taiwan University and from MBARI, including geologist Roberto Gwiazda and seafloor-mapping expert David Caress. The researchers used MBARI’s autonomous underwater vehicles (AUVs) to map the seafloor and MBARI’s MiniROV to explore a few key sites and collect video and sediment samples.

Submarine pingos formed slowly and may still be growing

The surveys off Taiwan revealed hundreds of pits, but only a few seafloor mounds. All of the mounds are more or less circular and have rough sides and tops due to outcrops of hard, cracked, carbonate rocks. The authors suggest that these rocks form at or just below the seafloor when methane-rich fluids react with seawater to form carbonate rock crusts. Gradually, as methane or methane hydrate (an ice-like solid that forms when methane combines with seawater) collect beneath these crusts, the crusts are lifted up and crack like a sidewalk being lifted by tree roots. 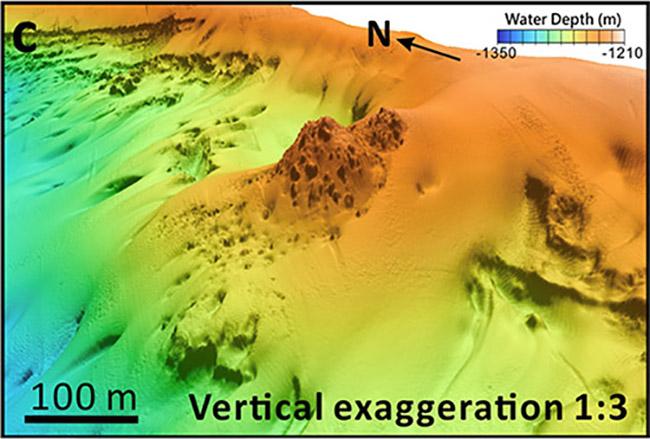 This underwater hill on the deep seafloor off Taiwan was revealed by sonar on MBARI’s seafloor mapping AUV. Some “comet-shaped depressions” are visible on the slopes around the hill

The mounds off Taiwan appear to be still in the process of formation. Methane gas bubbles actively from the tops of some mounds and subsurface sonar shows “chimney” structures beneath mounds where methane or other fluids rise up through the sediments from below. ROV surveys also showed living communities of methane-loving clams and tubeworms on some mounds.

In contrast to the small number of mounds, the Taiwan surveys revealed over 650 pits or pockmarks in the seafloor. Many of these pits are located on underwater slopes and are elongated in a down-slope direction, leading the researchers to refer to them as “comet-shaped depressions.” The pits are 30 to 70 meters (100 to 230 feet) long and three to nine meters (10 to 30 feet) deep, and typically occur in evenly spaced groups. 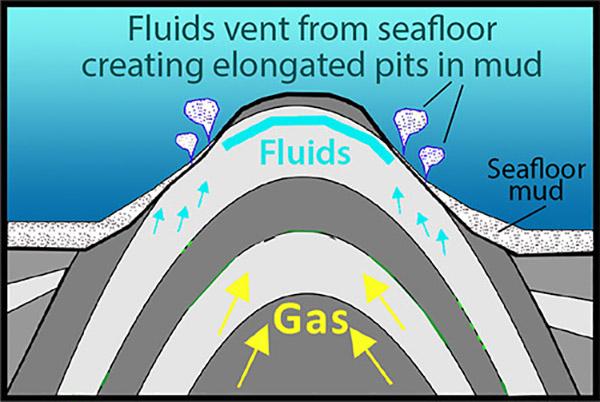 Because the shapes and textures of the pits off Taiwan are so similar, the researchers believe that the pits are all in similar stages of development, and could possibly have formed at about the same time. But they still aren’t sure exactly how the pits might have formed.

The authors considered three different processes that could have created the pits—erosion by strong currents, underwater landslides, or fluid rising from within the sediment. They eliminated the first two possibilities because the seafloor off Taiwan does not have strong bottom currents and it is unusual for landslides to occur in isolation and to be evenly spaced in the seafloor.

The researchers conclude that the comet-like depressions formed when fluids and/or gas rose up through the seafloor and vented into the overlying water. Subsurface sonar data show that these pits are all aligned along sloping layers of sediment that make good fluid conduits. When active, fluid flows may carry fine seafloor sediment up into the water column, creating a localized pit. In places where the seafloor is flat, such plumes of sediment might disperse over large areas rather than leaving a pile of debris. On underwater slopes, however, the sediment plume could flow downslope, making the pits longer in the downslope direction.

Interestingly, the researchers found no evidence that gaseous methane presently exists in the sediment below the pits in the seafloor. Paull’s previous research in other areas showed a similar lack of methane in sediments beneath many pockmarks.

Based on the small amount of sediment cover on and around the pits, the authors estimate that these features formed sometime within the last 6,000 years, but could be much younger.

Because all the pits contain about the same amount of sediment and there is no sign of older pits buried beneath the seafloor, the researchers speculate that the depressions all formed at roughly the same time, but are not presently forming. 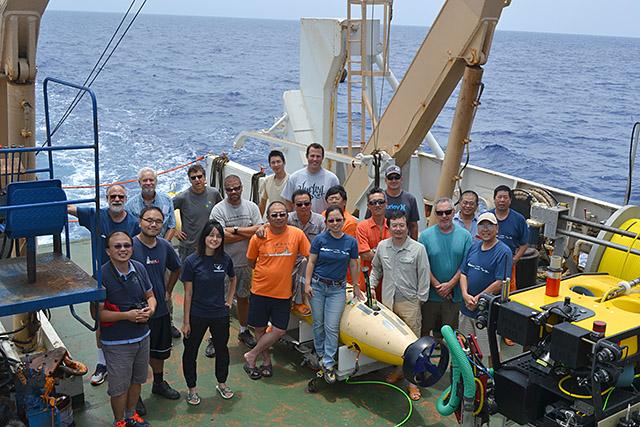 Taiwan sits on a very seismically active area and frequently experiences large earthquakes. The researchers suggest that such earthquakes could trigger sudden releases of methane from the sediment, perhaps creating some of the pits in the seafloor. The researchers are currently looking at records of tsunamis to see if any of these might indicate large quakes that could have released methane, creating the mysterious pits in the seafloor.