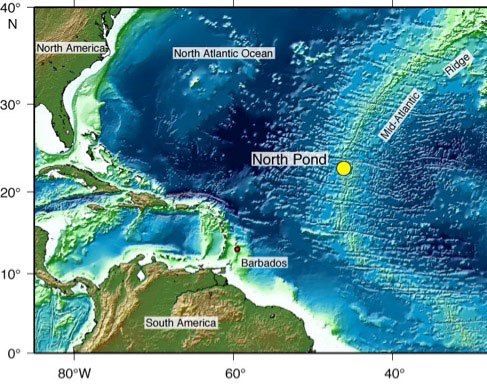 One of the startling discoveries about life on Earth in the past 25 years is that it can − and does − flourish beneath the ocean floor, in the planet’s dark, dense, rocky crust.

The only way to get there is by drilling through meters of sediment until you hit rock, so information on this ubiquitous but buried marine biosphere is still scarce.

Now, a team led by Marine Biological Laboratory Associate Scientist Julie Huber has added new details to our understanding of the nature of life way down under. In a recent paper, she and her colleagues offer the first description of an active microbial community buried in cold oceanic crust at North Pond, an isolated sediment pond on the western flank of the Mid-Atlantic Ridge.

The oceanic crust at North Pond is relatively young (8 million years old) and its circulating fluids are cold (<20 degrees C). By comparison, the temperature of crustal fluids can reach 400 degrees C at hydrothermal vents in the Mid-Atlantic Ridge, where tectonic plates are diverging and new oceanic crust is being formed. Credit MBL

The oceanic crust is anything but static: Seawater runs through its rocky crevices, creating a dynamic aquifer through which the entire volume of the ocean circulates every 200,000 years. Huber’s team discovered that the microbial community in North Pond crustal samples was oxygenated, heterogeneous, and markedly distinct from that found in ocean bottom seawater.

“In many cases, we found the same general group [of bacteria] in the crustal aquifer and in bottom seawater, but different species within that group,” Huber said. That means distinct differences in potential microbial activity between the two sites, such as more carbon fixation in the aquifer.

“The cold crustal aquifer is a different environment that is also globally important not just in terms of life, but biogeochemical cycling,” Huber says. “We are only starting to discover how things proceed there.”

The samples were obtained from a subseafloor observatory installed at North Pond by the Integrated Ocean Drilling Program in 2011. Combining genomic technologies with geochemical measurements, Huber’s team examined crustal fluid samples retrieved in 2012 from 50 to 250 meters beneath the seafloor, under h 4.5 kilometers of seawater. They are working on a time series to detect if and how the microbial community and fluid chemistry changes; they are currently analyzing 2014 samples and will collect more in 2017.

The Marine Biological Laboratory (MBL) is dedicated to scientific discovery – exploring fundamental biology, understanding marine biodiversity and the environment, and informing the human condition through research and education. Founded in Woods Hole, Massachusetts in 1888, the MBL is a private, nonprofit institution and an affiliate of the University of Chicago.