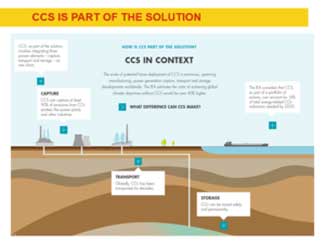 The world’s first ‘real world’ deep-water controlled experiment simulating emission from a submerged carbon dioxide storage reservoir is to take place in the North Sea, with the aim of further verifying the safety of offshore carbon dioxide (CO2) capture and storage (CCS).

Small quantities of CO₂ will be injected into mud on the sea floor in the North Sea, 100km North East of Aberdeen. This site is in the vicinity of a depleted gas field and is a typical location that could be used for carbon dioxide storage.

This first of a kind experiment, due to take place in 2018, will form part of a €16M collaborative project led by the National Oceanography Centre (NOC), which will enable scientists to develop a system for detecting and quantifying the volume of any CO₂ released. This work will help provide greater reassurance around the safety of CCS operations in the future.

Project leader, Dr. Doug Connelly from the NOC, said “Currently, it is challenging to detect and quantify CO₂ emissions in the marine environment because of dispersion and attenuation effects, the small volumes involved and considering large existing natural variability. This project is a really exciting opportunity to develop innovative, safe and cost effective technology to address these problems.”

In order to ‘listen’ for the released CO2, the project partners will be developing acoustic and chemical sensors that can be fitted into robot-subs. Automated photographic analysis software will also be developed to enable the detection of any visual changes at the release site. Additional technology used by this project will include devices in the water and on the seabed to monitor changes in the chemistry, temperature, salinity and currents in the water.

All this technology will be launched at the site in Scotland a year before the controlled release in order to acquire an in-depth picture of the natural variability of the environment on a daily, weekly and seasonal timescale. This information will enable scientists to better differentiate natural changes from those resulting from the controlled release.

This project, called STEMM-CCS (STrategies for the Environmental Monitoring of Marine CCS), has received funding from the European Union’s Horizon2020 project under the grant agreement number 654462. In addition to the industry partner Shell, this project will bring together the University of Southampton and Heriot Watt University, Plymouth Marine Laboratory, GEOMAR and MPI from Germany, NIVA, Uni Research and the Universities of Bergen and Tromso from Norway, the Technical University of Graz from Austria and Seascape Consultants Ltd.