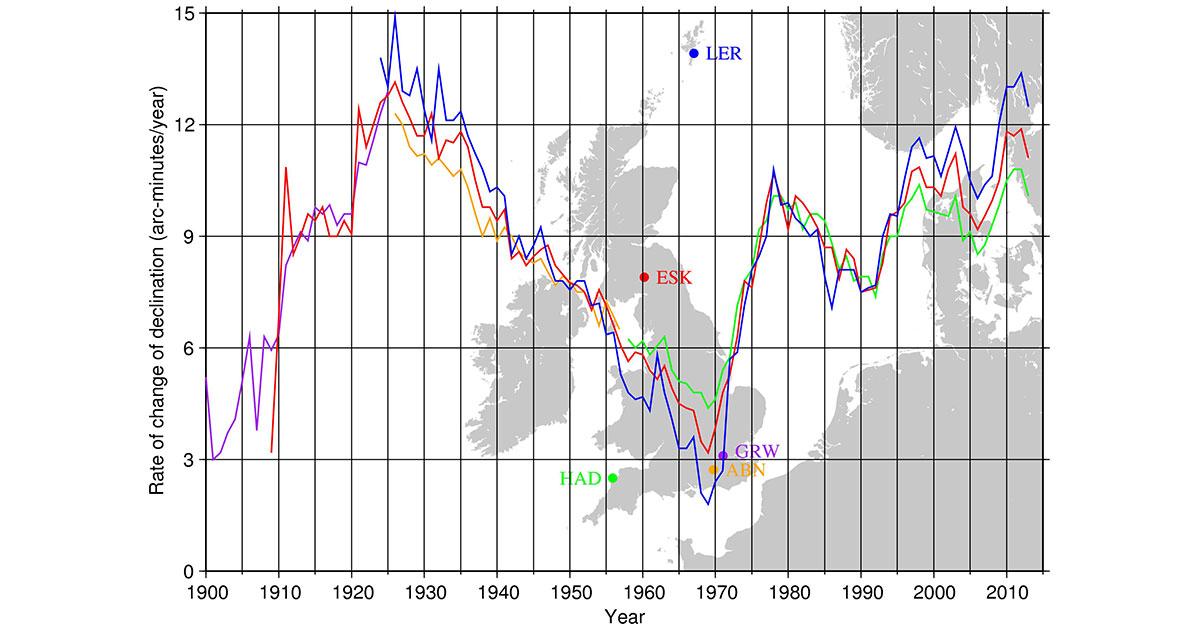 According to a recent article in Nature the Earth’s north magnetic pole has been racing away from Canada and towards Siberia so quickly that the world’s geomagnetism experts are expediting their update of the World Magnetic Model (WMM), which describes the planet’s magnetic field and underlies all modern navigation, from the systems that steer ships at sea to Google Maps on smartphones.

However, any urgency to correct errors in the model has been muted by the partial U.S. Federal government shutdown that began on 22 December 2018. The shutdown has impacted the expected 15 January 2019 update of the WMM, which according to Nature has been postponed until 30 January 2019.

“The error is increasing all the time,” Arnaud Chulliat, a geomagnetist at the University of Colorado Boulder and NOAA’s National Centers for Environmental Information told Nature.

Alexandra Witze writes in Nature that, “The most recent version of the model came out in 2015 and was supposed to last until 2020 — but the magnetic field is changing so rapidly that researchers have to fix the model now.”

By early 2018, researchers from NOAA and the British Geological Survey (BGS) determined that the model was “so inaccurate that it was about to exceed the acceptable limit for navigational errors.”

In a recent blogpost, Will Brown of the BGS Team explained, “Since late 2014 the core field has varied in an unpredicted, and currently unpredictable, manner. This led to the WMM becoming less accurate, particularly at high northern latitudes, much faster than normal, and so we released an update ahead of the next regularly scheduled WMM release in late 2019. We can map the field changes that have occurred since 2015, and show that they seem to be related to two phenomena, an abrupt unpredictable change called a geomagnetic jerk in 2014/2015, and an acceleration of flow in the core in the northern hemisphere. This update to the WMM will be used until the next release in December 2019, when we’ll make our best estimate of the likely change in the core field until 2025.”

It’s not just the WMM update that is being impacted by the lack of funding. As of the release of this article, all NOAA-hosted resources for observing Earth’s magnetic field—such as the WMM and the Earth Magnetic Anomaly Grid—are currently unavailable due to “a lapse in appropriation,” i.e., the government shutdown.

While researchers do not know exactly why the magnetic field generated by Earth’s molten iron core is fluctuating more than expected, Chulliat has suggested that the acceleration could be due to a polar magnetic upwelling, while recent research led by Julien Albert of the Institut de Physique du Globe de Paris has focused on numerical simulations of hydromagnetic wave dynamics to explain geomagnetic acceleration.