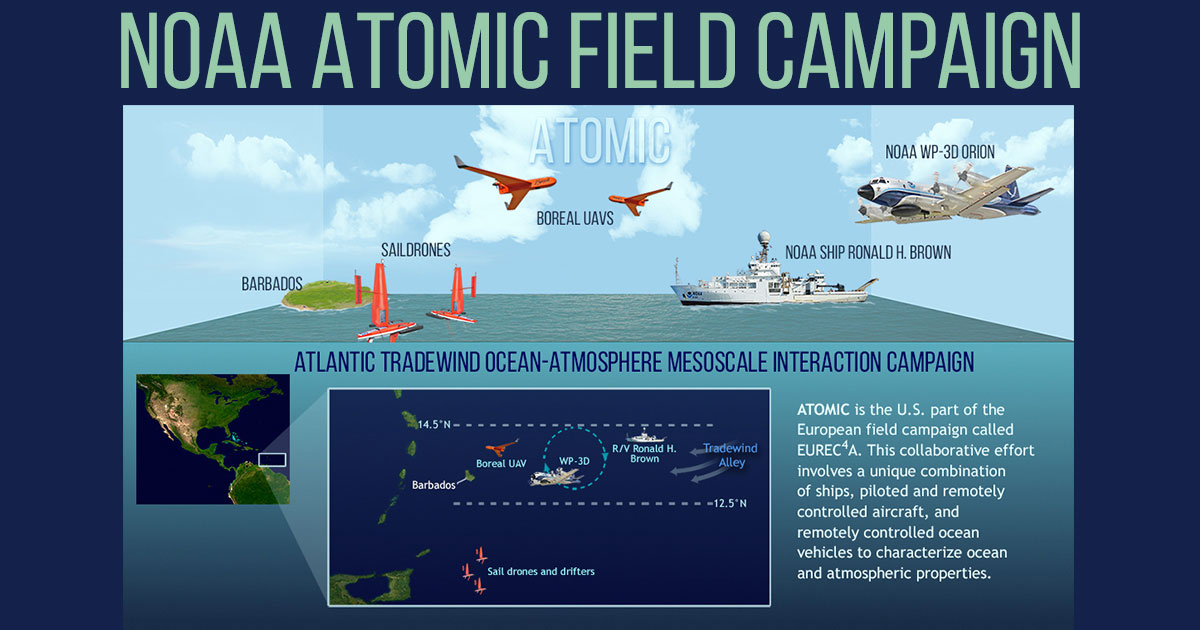 Coordinated research missions by scientists from America, Europe and the island nation of Barbados are plying the tropical ocean off of Barbados in search of an answer to a pressing question: Will the fluffy, innocuous, postcard-worthy armadas of clouds that help cool this stretch of warm seas, and tropical seas the world over, survive climate change?

To date, science has investigated how these clouds form and dissolve primarily using theories, models, and also observations from satellites, sparsely-spaced buoys, and prior field campaigns. Similar to prior research studies, the American, European and Barbadian campaigns currently underway will be focused on obtaining new data from instruments carried on four research ships, five instrumented airplanes, research-quality ground stations, and targeted satellites.

A fleet of unmanned sensors

But in a new tactic, they’re also deploying dozens of autonomous and remotely-piloted instrument platforms to capture simultaneous observations of the lower atmosphere and the upper ocean offshore of Barbados with unprecedented detail.

We still have many questions about the spatial variability of these processes that aren’t captured by satellites, or intensive research studies conducted at a single location,” said Elizabeth Thompson, a scientist with NOAA’s Earth System Research Laboratory. “Our current weather models are tasked with representing the interactions of air, sea, and clouds across entire ocean basins - at the level of individual clouds and rain cells - but observations of these quickly evolving conditions aren't available at all those locations, not even close.”

Understanding how the ocean talks to the atmosphere

The project’s distributed sampling strategy is designed to help scientists better understand the transfer of heat, freshwater, and momentum between the atmosphere and the ocean. In this unique region, air-sea transfers are related to rapidly-changing cloud patterns overhead and, from below, swirling ocean currents of varying temperature, salinity, and breaking waves. Getting a handle on how all these processes work together across vast stretches of ocean requires measurements - lots of them - many more than can be captured by ships, airplanes, weather balloons, and traditional observing tools alone.

Scientists are overcoming that challenge by deploying a large fleet of closely-spaced observation platforms in a targeted region where ocean properties and clouds vary from place-to-place and time-to-time. The massive trove of spatially distributed, fine-scale observations they'll collect is necessary to better understand, and eventually predict the intricate and intimate interactions of ocean and atmosphere that control the growth and dissipation of clouds, and ultimately how fast our planet is warming.

Climate models suggest global warming will cause a large decrease in these so-called “trade wind clouds,” leading to more warming of the oceans and a positive feedback loop that will make the warming effect from increased greenhouse gases worse than anticipated. One of the goals of this research is to assess whether the models are accurate. Results will also feed research to improve weather and ocean models.

Here are some of the unmanned sensors that will be deployed by NOAA’s ATOMIC (the Atlantic Tradewind Ocean–Atmosphere Mesoscale Interaction Campaign) and the European EUREC4A (Elucidating the Role of Clouds-Circulation Coupling in Climate ) campaigns.

Wave gliders are wave-propelled, solar-powered autonomous surfboards tethered to an instrumented underwater glider that controls speed and direction along a programmed or remotely-piloted path. They measure wave properties, currents, ocean temperature and salinity, exchanges between the air and water, along with surface weather. 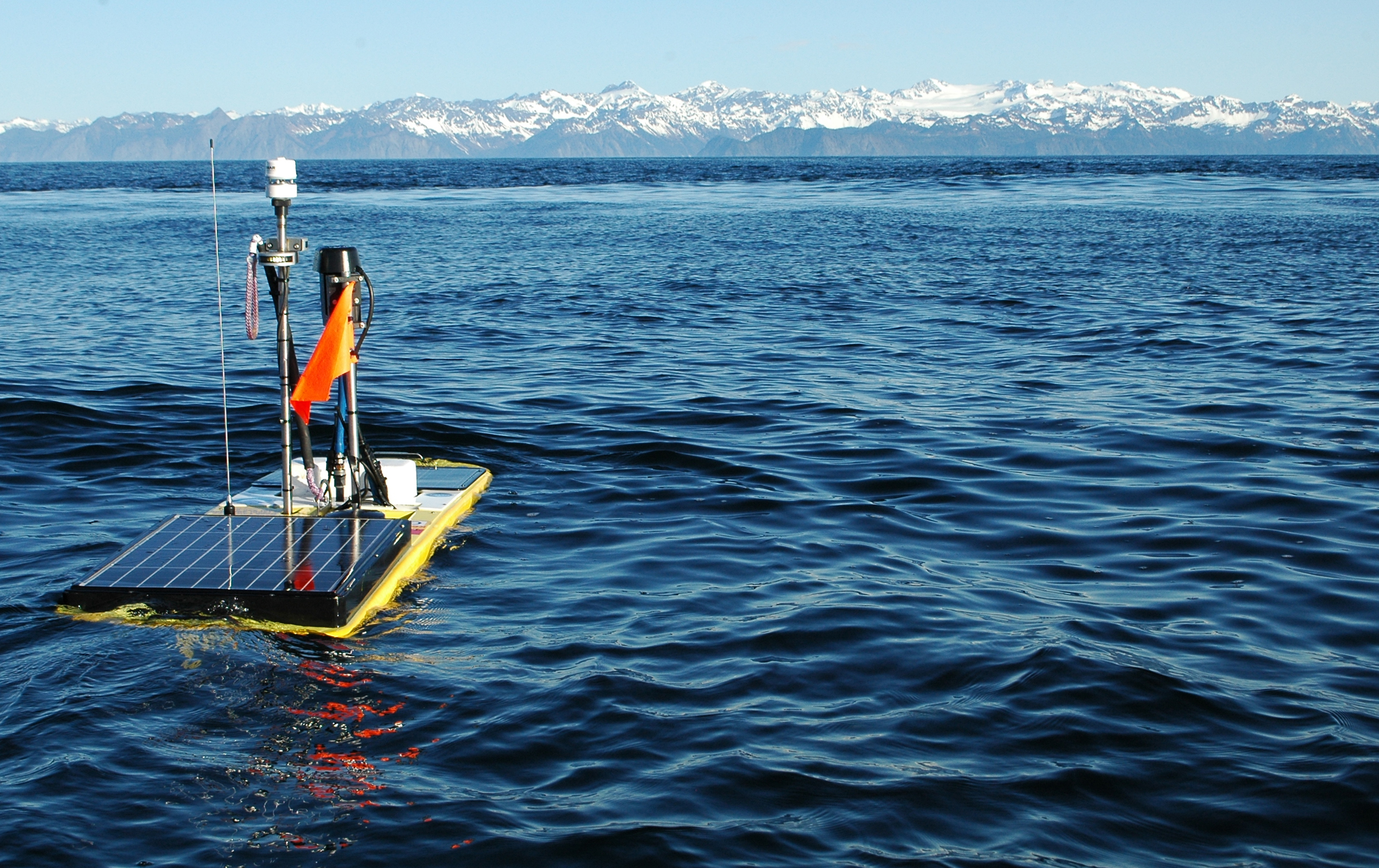 Wave gliders: These are wave-propelled, solar-powered autonomous surfboards capable of sustained deployment over multiple seasons that convert the energy of waves into thrust. Each wave glider is made up of a 7-foot long surfboard-like float tied to a submerged glider that controls speed and direction along a programmed or remotely-piloted path. Wave gliders measure wave properties, currents, ocean temperature and salinity, exchanges between the air and water, along with surface weather. Data are transmitted to shore via satellite

Seagliders: Five of these small, streamlined, free-swimming vehicles will repeatedly dive and climb to make measurements of the upper ocean traditionally collected by research vessels or moored instruments, but for months at a time and at a fraction of the cost. They can survey a transect, hover at a fixed location, or receive remote directions to follow a set course.

Saildrones: Five of these autonomous, solar-powered sailboats will operate in the larger ocean area around Barbados in January and February. It’s a unique instrument package that provides simultaneous measurements of the lower atmosphere and upper ocean: waves, ocean temperatures, salinity and currents, along with surface weather and ocean chemistry. Two NOAA-funded saildrones will be on extended operation from February through July, while the original saildrone fleet will return to Barbados for recovery.

Argo floats: These battery-powered autonomous floats spend most of their time drifting at a depth of about 1.2 miles measuring temperature and salinity, then rise to the surface on a set schedule to transmit data in real-time via satellite. Argo floats cycle through these dives, or “profiles” for four to five years on battery power. Since its inception in 1999, the Argo Program has grown to include almost 4,000 floats and participation from 26 countries across the globe.

Ocean Drifters: Ten enhanced drifting buoys will also aid in collection of ocean data. “Drifters” are composed of a surface float, which includes a transmitter to relay data via satellite, and a thermometer that reads temperature a few centimeters below the air-sea interface. The floats were also equipped with salinity sensors for this experiment. The surface float is tethered to a holey sock drogue (a.k.a. “sea anchor”), centered at 15 m depth. The drifter follows the ocean surface current flow integrated over the drogue depth.

In the skies: Unmanned aerial vehicles or UAVs can fly slower and lower than larger piloted aircraft, making UAVs ideal for probing the marine boundary layer that connects clouds with the ocean surface, from 100 to 10,000 feet of elevation. The ability of these small craft to fly grids at different elevations offers the opportunity to obtain measurements unavailable with larger, faster aircraft. The UAVs can collect needed information on turbulence and its impact on the transfer of heat, mass, and momentum across the cloud base.

NOAA scientists will deploy the RAAVEN UAV, carrying the miniflux sensor package developed by NOAA, CIRES and University of Colorado scientists in Boulder, Colorado, in flights just offshore, where ships and other ocean-based platforms can't operate. The measurements will explore the interactions between the ocean surface and the overlying atmosphere, as well as the interface between that boundary layer and the clouds that are generated.

These roaming autonomous platforms significantly enhance the coverage of data available across space and over time compared to that from one location. These datasets will complement the intensive data collection also taking place at the ships, aircraft, and buoys during ATOMIC.