Glider Swarm Tracks Newborn Eddy off the Coast of Peru 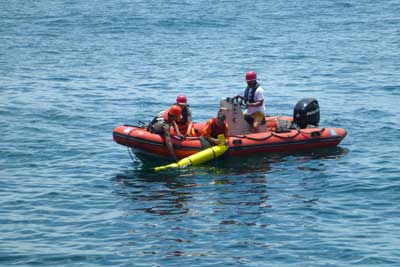 Using seven autonomous measuring platforms, so-called ocean gliders, oceanographers from Kiel and Bremen for the first time managed to document the formation of a nearly 100-kilometer wide eddy off the coast of Peru. These eddies are important for the transport of oxygen, nutrients and heat through the oceans. The study, which was conducted in the framework of the Collaborative Research Center (Sonderforschungsbereich, SFB) 754 “Climate – Biogeochemistry Interactions in the Tropical Ocean” has recently been published in the Journal of Geophysical Research – Oceans.

Not only powerful currents, like the Gulfstream, run through the oceans but countless eddies constantly move through the seas. Having diameters of up to 300 kilometers, they can survive up to five years while wandering through the ocean basins. Similar to the currents, eddies play an important role for the transport of heat, nutrients and oxygen. Different mechanisms for the formation of these eddies are known, with long-lasting examples often forming on the eastern boundaries of the oceans before migrating west. As the formation process takes place within a few weeks they are difficult to predict, making a direct observation hard to conduct.

Launch of a glider off the coast of Peru . Photo: Anna Reichel, GEOMAR

Scientists of the GEOMAR Helmholtz Centre for Ocean Research Kiel, of the Alfred Wegener Institute Helmholtz Centre for Polar and Marine Research in Bremerhaven (AWI) and the Max Planck Institute for Marine Microbiology in Bremen, funded by the Collaborative Research Center (Sonderforschungsbereich, SFB) 754 “Climate-Biogeochemistry Interactions in the Tropical Ocean”, were able to investigate the formation of an eddy of almost 100 kilometers in diameter, off the coast of Peru for the first time. They launched seven autonomous measuring probes, so-called gliders, from the German research vessel METEOR. The results of the observations have recently been published in the international Journal of Geophysical Research - Oceans.

The one and a half meter long ocean gliders function like small sailplanes under water. They dive back and forth between the water surface and 1,000 meters depth, converting the upward or downward movement by means of small wings and a sophisticated trim, into a forward motion. “So we can accurately steer the gliders to predetermined positions by remote control,” explains the glider expert Dr. Gerd Krahmann, from GEOMAR.

Fortunately, the observed eddy formed exactly in the region where the team had launched a swarm of seven gliders. They could examine the eddy’s impact on the salt, oxygen and nutrient distribution in greater detail than would be possible with a purely ship-based measurement campaign. Overall, more than 10,000 profiles of temperature, salinity, oxygen and chlorophyll were collected while the eddy was evolving. “Via satellite communication, we were able to receive the data from the gliders directly on board R/V METEOR in real time and thus could adjust the cruise schedule to optimize the sampling strategy,” explains the oceanographer and co-author Prof. Dr. Torsten Kanzow from the AWI.

“The data show in a fascinating way, that the water inside the eddy’s core originates from the bottom layers of the continental slope,” lead-author Sören Thomsen from GEOMAR describes the main findings of the study. The properties of this water differ greatly from those of waters in the open ocean. “The coastal areas are biologically very productive. As a result, many plants and animals die there, too. They sink to the bottom and are decomposed by bacteria. Of course, these biogeochemical processes affect the characteristics of the bottom waters,” says co-author Dr. Marcus Dengler from GEOMAR.

The eddy transported the water that it had drawn in from the continental slope, westward to the open Pacific. As almost no exchange occurs between the eddy and the surrounding waters, the differences in the properties persist. “With our study, we show that a large part of the eddy’s anomalous properties originate from the region where the eddy is formed," says Dr. Dengler.

Since these eddies transport water masses away from the Peruvian continental margin, they simultaneously create space for nutrient-richer water which ascends from the deep. Therefore, they also play a crucial role for the maintenance of high biological productivity of the coast of Peru. “This is highly relevant for the people. After all, fishing is an important economic factor in the region," says Sören Thomsen.

Background information:
The Collaborative Research Center 754 (SFB 754) “Climate and Biogeochemistry Interactions in the Tropical Ocean” was established in January 2008 as a collaboration between the University of Kiel (CAU), the GEOMAR Helmholtz Centre for Ocean Research Kiel and the Max Planck Institute Bremen. The SFB 754 investigates the changes in oceanic oxygen levels, their potential impact on the oxygen minimum zones and the consequences on the global interaction between climate and biogeochemistry of tropical oceans. The SFB 754 is funded by the German Research Foundation (DFG) and is in its third phase (2016-2019).
Reference:
Thomsen, S., T. Kanzow, G. Krahmann, RJ Greatbatch, M. Dengler, and G. Lavik (2015), The formation of a subsurface anticyclonic eddy in the Peru-Chile Undercurrent and its impact on the near-coastal salinity , oxygen, and nutrient distributions, J. Geophys. Res. Oceans, 120, http://dx.doi.org/10.1002/2015JC010878
back to top