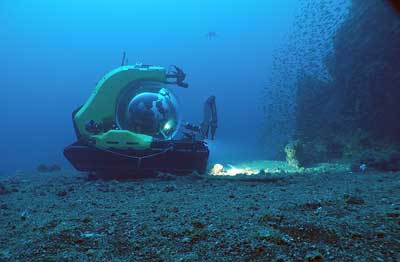 The Galápagos Islands have long offered researchers a natural laboratory in which to study unique volcanic features and a diverse population of native plants and animals. Although the creatures and islands have been well documented since Charles Darwin's revolutionary research in the 19th century, there's still much to be discovered beneath the waters that surround the remote Pacific Ocean island chain.

The Galápagos archipelago, which is made up of 13 major volcanic islands, occupies a submerged platform, which rises more than 3 kilometers above the adjacent seafloor. Until recently, the platform and the surrounding deep-water seamounts had not been explored using modern, high-resolution survey and sampling methods.

During a three-week expedition in August, an international team led by the Woods Hole Oceanographic Institution (WHOI), in partnership with the Charles Darwin Foundation for the Galápagos Islands and in close collaboration with the Galapagos National Park Directorate, conducted the first scientific expedition to map and characterize the seamounts on the Galápagos platform and the diverse marine life that these underwater mountains support.

"The well-known islands comprise only about five percent of the volume of the Galápagos, while the massive submarine volcanic platform is largely unexplored," said Adam Soule, a geologist at WHOI and chief scientist on the expedition. "That's part of what makes this work so exciting."

With the support of the Dalio Ocean Initiative, the research team, which also included scientists from Boise State University, University of California-Berkeley, the Charles Darwin Foundation, the Instituto Oceanográfico de la Armada del Ecuador (INOCAR), and representatives from the Galápagos National Park Directorate, worked from aboard the M/V Alucia in the central and western portions of the archipelago around the islands of Santiago, Santa Cruz, Floreana and Fernandina.

The high-resolution mapping revealed over 70 seamounts—many of which were not previously known. During the submersible dives, more than 150 rock samples and 300 biological samples were collected and catalogued. The research team is currently analyzing data collected during the expedition. Preliminary observations support the idea that the seamounts were emergent in the past during a period of low sea level corresponding to the last ice age about 26,000 years ago, and also points to a potential link between sea level decreases and increased eruption rates. Soule says these results could have implications regarding the evolution and past movements of animals between the islands.

A key scientific objective of this study is to understand the magmatic processes on the Galápagos Platform, which is currently based almost exclusively on samples from the volcanoes collected on land. "We will be conducting geochemical analyses on the samples to determine the link between the volcanic systems below and above the waterline," added Dorsey Wanless, an Assistant Professor at Boise State University and co-principal investigator.

"We've just begun to scratch the surface as far as characterizing this environment," added Dan Fornari, a marine geologist at WHOI and co-principal investigator. "We've mapped only about 10 percent of the platform, and already we see tremendous value in how these types of studies can inform our understanding of the Galápagos archipelago."

Results from the expedition will also provide crucial information for the management of the Galapagos Marine Reserve (GMR), a UNESCO world heritage site. Seamounts were teeming with fish and marine invertebrate life, including many species of economic importance for the archipelago, and many new potential records for the GMR. One of the highlights of the expedition could be the discovery of a new species of catshark. Video surveys showed rich and diverse communities dominated by deep-water hard corals, soft corals like gorgonians, and a number of encrusting and vase sponges.

"Seamounts are biodiversity hotspots and essential stepping stones for migratory species, including many threatened shark, turtle and cetacean species," said Pelayo Salinas de León, the senior marine ecologist at the Charles Darwin Foundation. "We still have many months of samples and data analyses ahead of us, but this expedition highlights the need to include some of these seamounts as protected areas in the ongoing re-zoning of the GMR."

Funding for this project was provided by the Dalio Explore Fund to WHOI.

CDF was supported by a grant from the Leona M. and Harry B. Helmsley Charitable Trust. The researchers are grateful to the Galapagos National Park Directorate and INOCAR for their support.