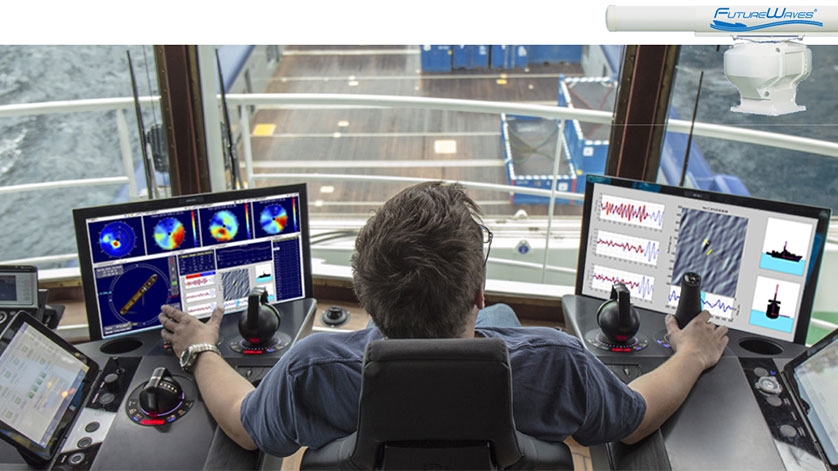 At the Offshore Technology Conference in Houston Texas this year, one exhibitor stood out as evidenced by the “wave” of excitement surrounding the release of their new and innovative technology – FutureWaves™.

Applied Physical Sciences Corp. (APS), a wholly owned subsidiary of the defense giant General Dynamics known for their advanced technological contributions to national security and worldwide commercial markets, released a revolutionary wave and vessel motion forecasting product that is sure to have a progressive impact on the offshore operations industry.

FutureWaves™, originally developed by APS under funding provided by the United States Navy’s Office of Naval Research, is a real-time shipborne system that uses a specialized X-band radar to measure and forecast ocean waves in the vicinity of the ship. It takes this information and determines the timing of waves and their impacts, which is then used to predict ship motions (such as heave, pitch, and roll) for minutes into the future. The system provides feedback for operational planning such as best course and speed for a particular operation, but also uniquely delivers critical timing information during ship and deck operations.

Though the FutureWaves™ development was initially focused on the U.S. Navy’s interest in loading and offloading of heavy equipment at sea (seabasing), the offshore operational applications are vast and varied. One current application of the product involves a world leading international offshore oil and gas industry marine contractor who is planning to install the product on their largest deepwater construction vehicle. APS is also in discussions for planned installations on cruise lines, transport vessels, sea-based helicopter landing platforms, oil drilling and production vessels and platforms, and other offshore construction vessels.

Forecasting waves is not a new idea, yet past attempts and previous methods have fallen short. While buoy methods are useful for measurement of wave conditions, they are logistically challenging and cannot provide wave timing information. Other radar methods have been limited to statistical products and not proven to provide the fidelity and high level of effectiveness required to support critical operations. FutureWaves™ provides detailed wave characterization that is far superior to any existing system and is the most advanced wave and vessel motion forecasting system of its kind available today. The U.S. Navy needed a real-time solution with actionable outputs, and so does the offshore operations industry.

“There are a number of patents and trade secrets that separate our product from the rest:” said John Kusters, former U.S. Navy Captain and current Program Manager for the FutureWaves™ product, “our hydrodynamic modeling that allows us to better forecast the impact of the ocean energy on the ship, our real-time updating of the orbital force of the ocean energy, and a few others that you’ll just have to see for yourself!”

Visit the APS site for additional information on this new technology.