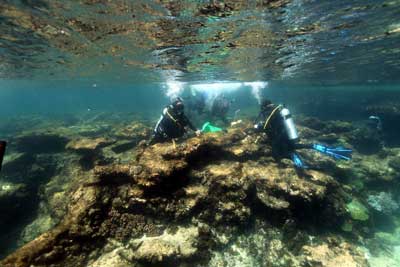 Each year the world’s largest reproductive event occurs on coral reefs around the world - and scientists look on in awe at Ningaloo Reef in Western Australia.

Coral spawning will happen along Ningaloo Reef, and other reefs in WA, five to ten days after the recent full moon (March 23).

Marine scientists from CSIRO and the Western Australian Department of Parks and Wildlife are studying coral spawning and the subsequent dispersal and settlement of coral larvae to help understand the current and future state of the reef.

"Coral spawning is a critical process for reef recolonization. We are also interested in how many new corals survive to adulthood and help rejuvenate disturbed areas," Dr Christopher Doropoulos from CSIRO Ocean and Atmosphere said.

"Understanding the early survival of coral recruits involves a series of manipulative laboratory and field experiments."

The scientists have been collecting information about coral recruitment in the Ningaloo region since 2010.

During this time major coral bleaching events and cyclones have passed through the area. Using the information gathered, the team can predict which areas of the reef are likely to recover positively following past and future disturbances.

The team is also assessing which environmental conditions improve or limit the survival of the tiny young corals.

Western Australian Parks and Wildlife scientists George Shedrawi and Peter Barnes have been monitoring the abundance of new young corals through artificial terracotta tiles installed throughout the Ningaloo Marine Park.

"New corals that recruit to the reef are the first step to recovery," Research scientist Mr. Shedrawi of the Science and Conservation Division said.

"We have been working to understand which reefs in WA’s marine parks are most resilient to changing environmental stresses."

Ningaloo Marine Park Coordinator Dr. .Peter Barnes said the knowledge gained from these studies contributes to the current and future planning of marine parks and reserves in the region. "Such studies inform adaptive management aimed at maintaining the ecological values of Ningaloo Reef," Dr. Barnes said.

"Ultimately, the work helps with the goal of long-term conservation of Ningaloo Marine Park for current and future generations."

US Only Months Away from Full Energy Ind