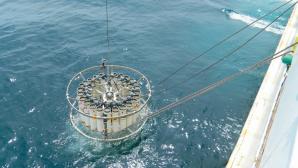 Five years after the Fukushima nuclear accident, there is still no U.S. federal agency responsible for studies of radioactive contaminants in the ocean. But scientific data about the levels of radioactivity in the ocean off our shores are available publicly thanks to ongoing efforts of independent researchers, including Ken Buesseler, a radiochemist with Woods Hole Oceanographic Institution (WHOI), who has led the effort to create and maintain an ocean monitoring network along the U.S. West Coast.

Since 2011, Buesseler has received contributions from citizens, small businesses, foundations and large companies to enable the sampling of nearly 1000 seawater samples for Fukushima radionuclides. Buesseler has been involved in seven cruises off Japan, sampling off Fukushima at least once every year, most recently in October 2015, and has published 19 peer-reviewed papers based on his analysis of seawater and sediments from the Pacific.

Buesseler’s work reveals that levels of radioactive forms of cesium in the ocean off Japan are thousands of times lower than during the peak releases in 2011, however, his analysis of cesium and strontium indicate releases from the plant are not yet “under control,” a statement that has been used by the Japanese government to describe the situation when levels are below regulatory limits.

A rosette sampler carrying 24 empty Niskin bottles is deployed into the Pacific to collect samples of water after the Fukushima nuclear accident. (Photo by Irina Rypina, Woods Hole Oceanographic Institution)

“To date, we have focused our efforts on testing for the two isotopes of cesium (137 and 134) and strontium,” says Buesseler. “The cesium isotopes were the most abundant after the accident and provide the first indication of whether contamination from Fukushima is present in a seawater sample.” Because cesium-134 has a half-life of just two years, researchers know, when detected, that it comes from Fukushima. Cesium was 40 times more abundant in the water after the accident than strontium – a ratio that the scientists discover is changing.

The changing concentrations of both these elements in the waters off Japan tell a story of continued small leaks and raise concerns about the materials still stored at the reactor site.

Cesium levels in the water off Japan spiked after the accident, then fell dramatically in the following year. Since then, however, rather than a steady decline, the cesium levels have remained relatively constant.

“Levels today off Japan are thousands of times lower than during the peak releases in 2011,” says Buesseler. “But we are not seeing the steady decrease we would expect to see off Fukushima if all sources had stopped; rather, we are finding values are still elevated, which confirms that there is continued release from the plant.”

The highest level of cesium Buesseler’s team found in a sample taken off Japan in October 2015 measured 200 Becquerels per cubic meter (about 264 gallons) of seawater. (A Becquerel equals one decay event per second.) The samples were collected following a typhoon in September that delivered unusually heavy rains, which the researchers suspect may have caused elevated cesium levels in the ocean. These levels are still higher than prior to the accident but much lower than at the peak of the releases in 2011 when there were 50 million Bq/m3 in the ocean immediately off the dock at Fukushima.

While not declining as quickly as researchers had expected, the levels detected near Japan are still more than 40 times lower than US government safety limits for drinking water, and well below limits of concern for direct exposure while swimming, boating, or other recreational activities. At these lower levels, the concern remains for seafood safety and internal consumption of radioactive contaminants in fish.

The scientists have learned that cesium is just part of the story: Strontium, too, is not falling as expected. Strontium-90 has nearly the same half-life of cesium-137, and the researchers expected its levels would drop in step with cesium. Yet Buesseler and colleagues led by Universitat Autònoma of Barcelona, Spain have found that strontium is not decreasing as fast as cesium. Whereas there was approximately 40 times more cesium than strontium in the waters off Japan in 2011, by 2013, there was approximately 10 times more cesium than strontium. The concern lies in the thousands of tons of strontium still stored in tanks at the nuclear power plant and accumulated in buildings and soils, some of it still leaking into the ocean.

“We think that when there is heavy rain, more cesium, strontium, and other isotopes from the nuclear power plant are carried into the ocean,” says Buesseler. “We are still investigating how that occurs –whether carried in the groundwater or from the run off of sediment – but clearly it is highest near the contaminated site of the Fukushima nuclear power plants.”

Because strontium-90 mimics calcium in humans and animals, it is taken up by and concentrated in bones, where it remains for long periods of time, making it a greater health concern than cesium. Cesium, on the other hand, flushes out of the body much faster.

“Whereas it takes approximately two months for half of the radioactive cesium to flush out of fish, it takes more like two years for strontium to flush out of fish because it’s in their bones,” says Buesseler. “So if the supply of strontium to the ocean gets worse, it would take longer for the levels to decrease in seafood. So far, strontium levels are more than a hundred times lower than cesium when measured in fish, so it has not been a concern, but we have to monitor it.”

In addition to studying the waters off Japan, Buesseler and his colleagues have been actively monitoring the Pacific waters off the North American West Coast, primarily for cesium, the most abundant element after the accident. So far, they have detected only minute quantities of Fukushima cesium.

Fukushima-derived cesium first arrived along the west coast of North America in February 2015, measuring 6 Bq/m3 in Ucluelet, British Columbia. The highest numbers the researchers have seen in the eastern Pacific are almost 10 Bq/m3, found some 1,500 miles north of Hawaii. “If you were to swim in waters at this level the health effects, or dose, would be 1000 times less than a single dental x-ray. This is not zero, but a very small risk that would not stop me from swimming or eating seafood from our side of the Pacific,” said Buesseler.

The researchers receive enough questions about strontium that they re-analyzed some of the West Coast samples that contained Fukushima cesium-134 looking for strontium, and have not detected any above the background levels that were there before Fukushima.

“So little strontium was released relative to cesium from Fukushima in 2011, that even though Fukushima cesium is detectable, the strontium-90 signal is not detectable in these samples, at least in the eastern Pacific,” says Buesseler.

The researchers continue to collect and analyze samples both from citizen scientists and, when possible, from ships and research cruises on the eastern side of the Pacific. The data are made publically available through the Our Radioactive Ocean, the crowd-funding website Buesseler created for this purpose. The site’s map interface allows the public to see where samples were collected and the cesium values measured in each sample.

Levels in the ocean are expected to peak along the West Coast of the U.S. some time in 2015 or 2016, so continued monitoring is needed.

UBC Research Indicates Only 4% of the Oc