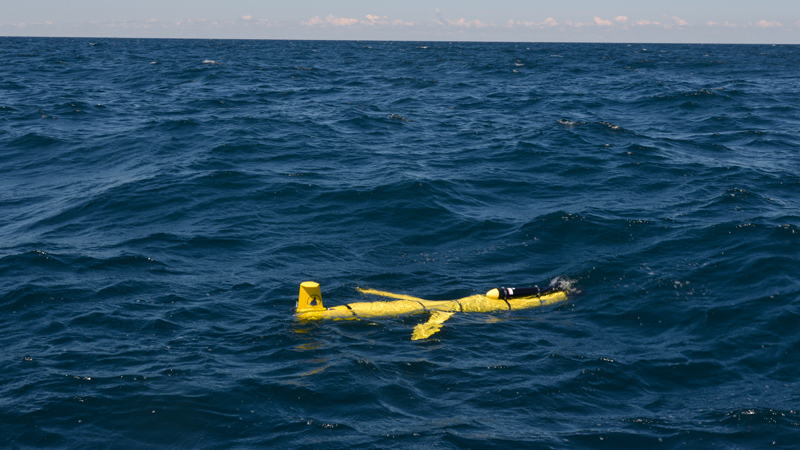 A regional team from Woods Hole Oceanographic Institution (WHOI), Rutgers University, the University of Maine, the University of Maryland, and the Gulf of Maine Research Institute mobilized on September 2, in advance of post-Tropical Storm Hermine’s arrival in the Northeast to gather data from new ocean instruments that will help better predict the intensity and evolution of future tropical storms along the US East Coast.

The team, part of the TEMPESTS program organized through the Cooperative Institute for the North Atlantic Region, is funded by the NOAA office of Oceanic and Atmospheric Research.

The glider deployed by WHOI engineers on Sept. 2, 2016, is an ocean robot carrying sensors that can collect data and transmit it by satellite to scientists on shore. The glider will fly underwater across the continental shelf south of New England, in water approximately 100 – 300 feet deep. The glider is capable of sustaining itself at sea for about one month. (Photo by Ken Kostel, Woods Hole Oceanographic Institution)

Operating from a boat in the waters south of Martha’s Vineyard, WHOI engineers Sean Whelan and Patrick Deane deployed an underwater glider – an ocean robot carrying sensors that can collect data and transmit it by satellite to scientists on shore. The glider will fly underwater across the continental shelf south of New England, in water approximately 100 – 300 feet deep. The glider is capable of sustaining itself at sea for about one month. Rutgers University has also launched two gliders across the New Jersey continental shelf. In addition to the gliders, buoys built by the University of Maine are also in place off-shore in Maine, Massachusetts and Maryland. The TEMPESTS program has also deployed ALAMO instruments from Hurricane Hunter aircraft to provide ocean temperature information farther off-shore and closer to the storm.

Understanding and predicting hurricane intensity has become a sort of Holy Grail of storm prediction and emergency preparedness along the entire East Coast.

“When Hurricane Irene hit New Jersey and New York, we had a pretty good idea of where the storm was headed in advance,” said WHOI physical oceanographer Glen Gawarkiewicz, “we just didn't know how strong they'd be when they made landfall. One of the reasons it's so hard to forecast is that intensity depends on sea-surface conditions directly ahead of and below the storm. Gliders and other new instruments we are testing enable us, for the first time ever, to make measurements in these very harsh conditions.”

The team put a glider in the storm’s path, where it will measure ocean water temperature salinity, and oxygen, in the ocean as the storm approaches land. The data from the glider helps scientists better understand how the ocean changes conditions from depths of hundreds of meters to the surface as the storm passes through. The data will also give them a better picture of how the ocean "recovers" after the storm has passed (storms often leave a "cold wake" behind them), which can affect weather and follow-on storms long after the initial storm is gone.

“The glider will give us a look at how heat from the ocean powers the storm,” said Robert Todd, a physical oceanographer who operates the glider lab at WHOI and will watch the glider’s progress throughout the storm and even alter the robot’s path, if necessary, from his phone or computer anywhere with an internet connection. “We’ll see how the ocean heat content over the continental shelf evolves before, during, and after the storm.”

Current forecast shows the storm slowing and strengthening as it approaches New England and possibly veering a bit toward land. The gliders will remain in the water through the storm and for a few weeks after to capture how the coastal ocean evolves after the storm passes. The team will fully analyze all the data and their impact on Hermine simulations in the months ahead.