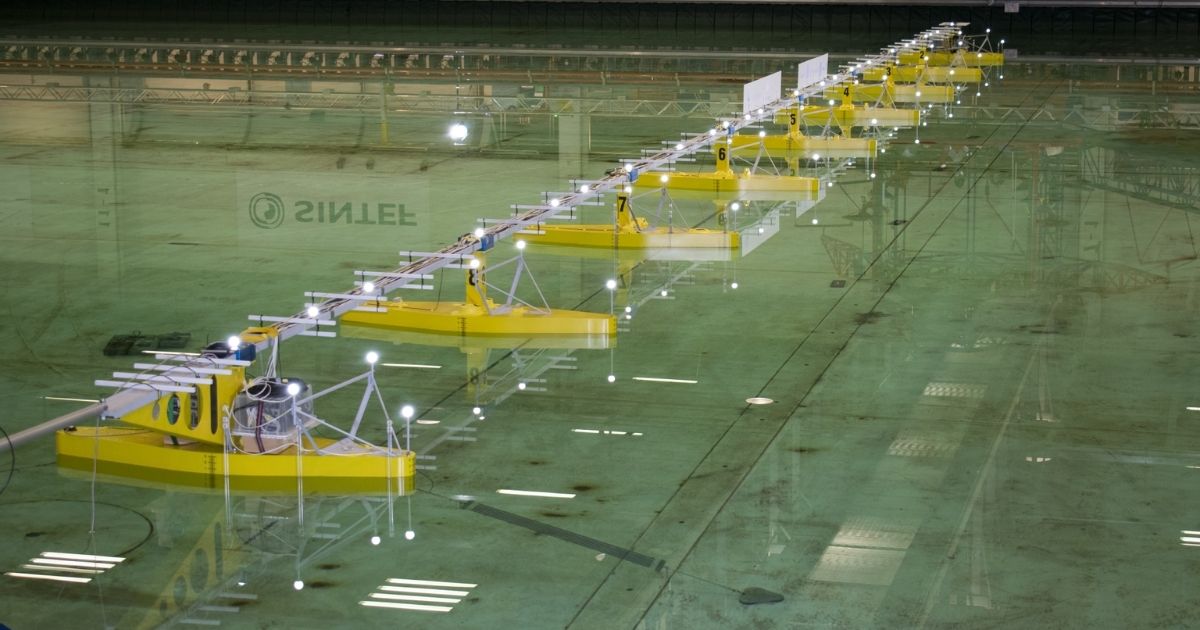 Floating bridges for the future

LFCS is a Knowledge-Building Project for Industry (KPN project) with financing from the Research Council of Norway. The project’s objective is to come with recommendations for the design of large coastal structures, as well as to develop methods and tools for hydro-elastic analysis of coastal structures in situations with varying conditions and water depth. The project places special emphasis on floating bridges to be used for fjord crossings, which is in line with the Norwegian Public Roads Administration’s long-term goal of building a ferry-free route along the E39.

The project, which began in 2017 and will continue until 2021, was established by SINTEF Ocean and NTNU, with support from the Research Council of Norway, the Norwegian Public Roads Administration, Hydro ASA, Multiconsult AS, SWECO AS and LMG Marin AS.

From computer screen to physical model

Contradictory to what might be presumed, the model test didn’t start in the Ocean Basin Lab, but rather on a computer screen. The enormous length of the bridge meant that it couldn’t be tested with a scaled-down version as usual, as the quality of the results would have been compromised. Therefore, the researchers needed to design and analyse the full length of the bridge with the help of numerical models. SINTEF’s own SIMA software was used for the numerical calculations. This numerical model was then calibrated and verified, and this is where the Ocean Basin Lab comes in. A truncated, 1000-meter section of the bridge was set in for testing, where it was then exposed to waves, currents and wind from all directions while various datapoints were measured.

Numerical model of the generic bridge.

The large size of the model, however, presented new challenges that required innovation. A set with nine motorised and controlled winches were used to apply realistic and varied wind forces along the bridge, and the same winches were further used to perform pull-out and decay tests.

“I was very pleased to see how smoothly the tests went. It shows the value of all of our preparations,” said project leader Miguel Rodrigues. “This has been my biggest project since coming to SINTEF Ocean in 2017, and I am incredibly thankful for the collaboration our team has accomplished here.”

Going forward, the results will be evaluated by both NTNU and SINTEF Ocean, and the project will come with suggestions for the design of similar structures, as well as procedures for further model testing.

Looking toward the future

The model test represents an important milestone for SINTEF Ocean, as it proves the company is equipped with the competence needed to perform tests on large, floating structures like the most recent bridge. As a result of this successful model test, SINTEF Ocean has already secured three new tender specifications for model tests in conjunction with the Norwegian Public Roads Administration. These will be carried out through the end of the year and into the first quarter of 2021.

“Large floating coastal structures are going to be an important part of our future, especially for coastal Norway, and this is a subject area that SINTEF Ocean knows well,” said Rodrigues. “We hope to be able to contribute to many different projects in the future, and we look forward to being a part of the development.”    See more of what was done in the model test in the video under, and to learn more about the project, visit the project’s website.