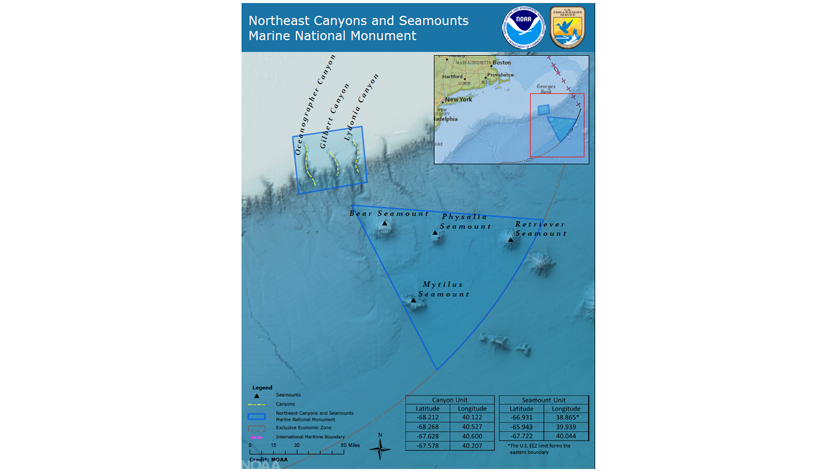 Deep in the oceans exist some of the world's oldest and most mysterious sea canyons and mountains, or seamounts. Formed millions of years ago by extinct volcanoes and sediment erosion, sea canyons and seamounts are biodiversity hot spots — home to many rare and endangered species.

President Obama has designated the first marine national monument in the Atlantic Ocean, the Northeast Canyons and Seamounts Marine National Monument. The new national monument will provide critical protections for important ecological resources and marine species, including deep-sea corals; sperm, fin, and sei whales; Kemp's ridley sea turtles; and, deep-sea fish. The monument, which encompasses 4,913 square miles, has been the subject of scientific exploration and discovery since the 1970s. In addition to preserving these resources for future generations, the designation will complement other marine stewardship efforts, including advances in fisheries management.

The monument, more than 100 miles southeast of Cape Cod in the northwest Atlantic Ocean, is home to undersea canyons and seamounts that comprise fragile and largely pristine deep marine ecosystems and rich biodiversity, including important deep sea corals, endangered whales and sea turtles, other marine mammals and numerous fish species.

The monument designation comes after significant engagement with local communities and fishermen. “The United States is a leader in ocean stewardship and marine conservation,” said Secretary Pritzker. “This designation follows extensive engagement with various stakeholder groups and ensures conservation of important marine species and recognizes the strong economic and cultural value of fishing in the region. From sea level rise to ocean acidification to warming ocean temperatures, climate change is affecting our nation’s fisheries and fishing communities. Now, it is more important than ever to protect these valuable resources.”

“Today’s designation will help protect the unique geology and biodiversity of these important underwater features and wildlife species that cannot be found anywhere else in the world,” said Secretary Jewell. “This critical marine area, which serves as important habitat for pelagic fish species, corals, whales, sea turtles, sea birds and other species, will now be protected and preserved for future generations, serving as an important natural laboratory for research and enhanced understanding of the impacts of climate change on our oceans.”

The Northeast Canyons and Seamounts Marine National Monument includes two areas: one that includes four undersea mountains - Bear, Mytilus, Physalia, and Retriever; and an area that includes three undersea canyons – Oceanographer, Lydonia, and Gilbert that cut deep into the continental shelf. The combined area is approximately 4,913 square miles. The National Oceanic and Atmospheric Administration, in partnership with the U.S. Fish and Wildlife Service, will manage the monument.

These areas are home to deep-sea coral ecosystems with rich biodiversity and unique species. Additionally, these geographic features result in oceanographic conditions that concentrate pelagic species, including whales, dolphins, and turtles; and highly migratory fish such as tunas, bullfish, and sharks. A large number of birds also rely on this area for foraging. The purpose of the proposed monument designation is to protect these fragile and largely pristine deep-sea habitats, and species, and ecosystems. Designating the monument ensures continuing and expanded protection of the area for future generations.

Both areas have been the sites of active scientific exploration, investigation, and discovery by oceanographic researchers. The New England seamounts have been found to have many rare and native species, several of which are new to science and known to live nowhere else on Earth. Recently, the National Oceanic and Atmospheric Administration’s research vessel Okeanos Explorer identified 15 species of coral in the area that had not been previously reported.

Commercial fishing, with the exception of a seven-year phase out for existing permits of the red crab fishery and the American lobster fishery, and other resource extraction activities will be prohibited within the monument boundaries. Additionally a 60-day grace period is in effect to ensure an orderly transition for all fisheries (other than red crab and American lobster) that are prohibited in the monument. Noncommercial fishing, such as recreational fishing, will be allowed in the expansion area by permit, as will scientific research.

The announcement is made by the President under the authority of the Antiquities Act, a 1906 law that has been used by 16 presidents starting with President Theodore Roosevelt to protect national treasures such as the Grand Canyon, the Statue of Liberty, the C & O Canal, and Colorado’s Canyons of the Ancients. President Obama has used this authority granted by Congress now 27 times to protected hundreds of millions of acres of public lands and waters – more than any other President – and has preserved sites that help tell the story of significant people and extraordinary events in American history.