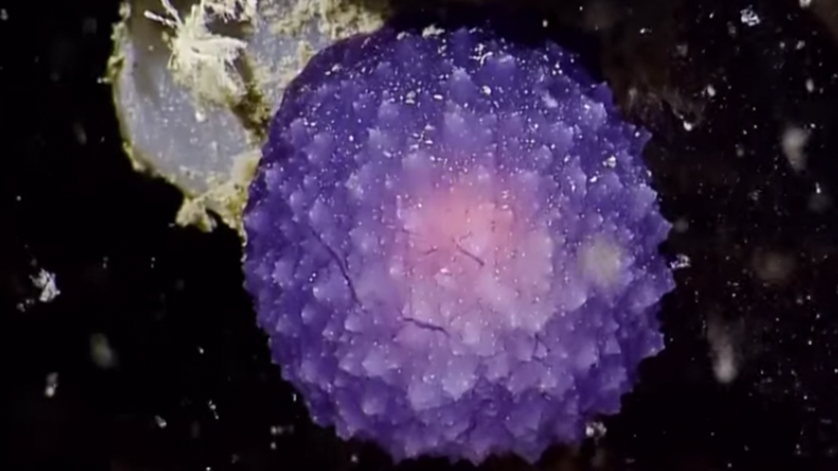 Five hundred vents newly discovered off the US West Coast, each bubbling methane from Earth's belly, top a long list of revelations about "submerged America" being celebrated by leading marine explorers meeting in New York.

"It appears that the entire coast off Washington, Oregon and California is a giant methane seep," says RMS Titanic discoverer Robert Ballard, who found the new-to-science vents on summer expeditions by his ship, Nautilus.

The discoveries double to about 1,000 the number of such vents now known to exist along the continental margins of the USA. This fizzing methane (video: http://bit.ly/2egtF7F) is a powerful greenhouse gas if it escapes into the atmosphere; a clean burning fuel if safely captured.

"This is an area ripe for discovery," says Dr. Nicole Raineault, Director of Science Operations with Dr. Ballard's Ocean Exploration Trust. "We do not know how many seeps exist, even in US waters, how long they have been active, how persistent they are, what activated them or how much methane, if any, makes it into the atmosphere."

Further research and measuring will help fill important knowledge gaps, including how hydrocarbons behave at depth underwater and within the geological structure of the ocean floor.

Expeditions this year include also NOAA's Deepwater Exploration of the Marianas Trench -- a 59-day voyage with 22 dives into the planet's deepest known canyons in the Pacific Ocean near Guam. NOAA explorers added three new hydrothermal vents to the world's inventory and a new high-temperature "black smoker" vent field composed of chimneys up to 30 meters tall -- the height of a nine-story building.

Scores of spectacular, rare and sometimes baffling unknown species encountered on this year's first-ever voyages to new deep ocean areas include several purple animals such as:

Beyond being spectacularly photogenic, such animals help scientists better understand the web of life that sustains all species, including humans.

As well, understanding how "extremophile" lifeforms survive in such conditions (piezophiles, for example, thrive in high pressure; pyschrophiles, aka cryophiles, live in water as cold as ?20 °C, as in pockets of very salty brine surrounded by sea ice), is usefully relevant to food and pharmaceutical preservation technologies, medical technology, nanotechnology and energy science.

Dr. Ballard and about 100 other leading figures in marine science meet Oct. 20-21 to compare thoughts on the future of marine exploration at the 2016 National Ocean Exploration Forum, "Beyond the Ships: 2020-2025," hosted in New York by The Rockefeller University in partnership with Monmouth University. The Forum is also supported by the Monmouth-Rockefeller Marine Science and Policy Initiative, NOAA, the Schmidt Ocean Institute, and James A. Austin, Jr.

Ocean exploration has arrived at a historic hinge, Forum organizers say, with profound transformation underway thanks to new technologies, led by increasingly affordable "roboats" -- autonomous or remotely controlled vehicles that dive into the ocean or ply the surface laden with sensors collecting information from instruments suspended beneath them.

Says Wendy Schmidt, co-founder of Schmidt Ocean Institute: "With ROV SuBastian we will help make life on the ocean floor real to people who will never visit the sea, so they, too, can begin to appreciate the importance of ocean health and make the connection between life in the deep sea and life on land." "You don't have to be a scientist at sea to recognize the importance of the marine environment, and we are only at the beginning of our understanding. We never anticipated discovering the world's deepest living fish, the ghostfish, back in 2014, and are excited about the life we will discover next."

ROV SuBastian will have that opportunity this December during its first science cruise, in the Mariana Back-Arc in the western Pacific. (Cruise details: http://bit.ly/2dXOMvA. All dives will be live-streamed on Schmidt Ocean Institute's YouTube page: http://bit.ly/2dB5Neg).

Contributing as well to the transformation: Modern communications and sampling techniques, including eDNA, big data analysis and other high-tech advances that automate and vastly accelerate the work, opening the way for experts and the public to reach, see, chart, sample and monitor formerly secret depths of the seas. 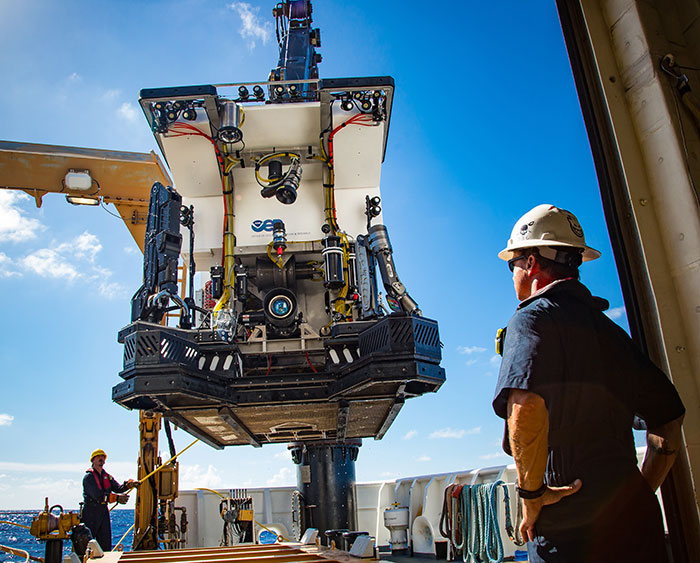 Innovations include portable observatories for underwater monitoring and a "curious exploration robot," programmed to focus on everything unfamiliar to its data bank brain (photo: http://bit.ly/2dXV9fz, video: http://bit.ly/2dq4eA3, credit WHOI).

According to innovator Yogesh Girdhar of the Woods Hole Oceanographic Institution, in a recent test off the Panama coast, the suitcase-sized swimming robot discovered a startlingly enormous population of crabs.

Other engineers, meanwhile, are developing "game changing" unmanned undersea and surface vehicles tricked out with an array of sophisticated sensors to perform a suite of underwater tasks, enabled to run for months by recent improvements in battery technology. (See video, for example, of Boeing's 51-foot Echo Voyager: http://bit.ly/2crlznh).

Such "roboats" can be programmed to conduct deep sea exploration or searches using a lawn mower pattern, surfacing regularly to report data back to shore via satellite, or to patrol a coastal area, returning to port after one or two months to recharge and redeploy.

These technologies will enable today's generation to "explore more of Planet Earth than all previous generations combined," predicts Dr. Ballard, whose celebrated career will be recognized at the Forum with the Monmouth University Urban Coast Institute's Champion of the Ocean award.

The technologies will not only help discover and monitor new mineral and living resources, they could help secure interests vital to the world's economy or identify the best paths for communications cables that span the ocean floor -- the veins of the Internet.

Forum participants such as John Kreider of Oceaneering International envision such ships in future serving as hives from which flotillas and squadrons of autonomous underwater, surface and aerial vehicles are launched -- robots guided by experts on board or remotely, such as from a distant university campus via "telepresence," returning with images and data orders of magnitude larger than ever before. Thanks to modern communication technologies, schoolchildren, their teachers and indeed any interested members of the public can, and do, now follow expeditions online in real time.

Among the many compelling interests and pursuits of marine scientists and historians in the public, private and military sectors:

Says scientist James (Jamie) A. Austin, Jr. of the University of Texas, "the slow, time consuming and expensive way we've done ocean exploration forever -- one ship doing one task at a time -- is giving way to autonomous systems that net massive hauls of data, with advances in big data analysis enabling scientists to make sense of it rapidly."

Dr. Austin envisions installations on the seafloor -- measuring tremors or helping scientists estimate the rate at which Earth swallows carbon into its mantle through plate tectonics, for example -- with data delivered by a device periodically flying up and down to the surface.

Simply mapping the ocean floor is an important goal. While satellites have fully charted the seafloor in low resolution, only 10% is mapped in detail. At an estimated cost of $2.9 billion -- or about $9 per square kilometer ($23 per square mile) -- a "Gurgle Earth" map of the deep oceans could be completed at high resolution using swath like, multi-beam sonar.

The hazard of uncharted oceanic mountains, trenches, volcanoes and other features was dramatically underscored in 2005 when a nuclear attack submarine, the USS San Francisco, struck a seamount in the Pacific at high speed, killing one crew member and injuring 97.

Over 50% of US territory lies beneath the ocean surface and such mapping could also expand American territorial and resource claims.

According to Dr. Ballard, key marine discoveries to date include: