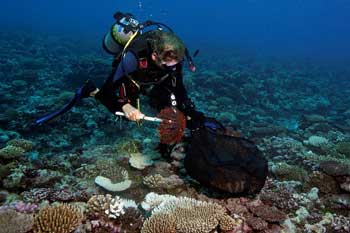 Foundation scientists worked with divers from local resorts as part of the Foundation’s ongoing Starfish Control and Removal (SCAR) Program to protect reefs from the damaging effects of the coral-eating starfish.

According to Dr. Andrew Bruckner, Chief Scientist for the Khaled bin Sultan Living Oceans Foundation, “This was an uncommon opportunity for recreational divers, dive operators and local divers to take an active role in conserving the reefs they value.”

The timing of the projects was designed to protect any bleaching-resistant corals from predation in advance of a possible warming and bleaching of the reefs next year. While in the Maldives the Foundation’s science team surveyed coral reefs to record the number and distribution of COTS, assessed the extent of damage, and studied the feeding preferences of the starfish. Scientists also collected tube feet from the starfish to determine where they came from and how the outbreak is spreading.

COTS are a significant threat to coral reefs in the Indo-Pacific region. When outbreaks are not controlled quickly, COTS often consume all the coral in one area and spread to neighboring reefs. Severe outbreaks of COTS are capable of destroying an entire reef system in a matter of weeks, and reefs may require decades or more to recover. COTS outbreaks could have a devastating impact on dive tourism.

The scientists are hoping to scale-up this COTS removal program to protect larger reefs. Because scientists are unlikely to be able to deal with the scale of the problem alone, local divers are going to play a critical part in the success of the removal efforts. The team will return next year to assess the health of reefs where they removed the COTS and determine how successful the project has been.