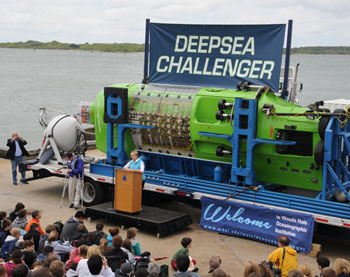 The co-star of the James Cameron’s latest film is not your typical Hollywood starlet. She’s 24-feet long, bright green and weighs approximately 11.8 tons.

The one-of-a-kind, deep-diving submersible DEEPSEA CHALLENGER will travel from its home at the Woods Hole Oceanographic Institution (WHOI) to the American Museum of Natural History in Manhattan, on Mon., Aug. 4, for the premiere of the feature film, “DEEPSEA CHALLENGER 3D,” presented by James Cameron, National Geographic and DisruptiveLA.

The film documents Cameron’s unprecedented solo dive in the DEEPSEA CHALLENGER in 2012 to 35,787 feet, almost 11,000 meters, to the deepest place on Earth—the Challenger Deep in the Mariana Trench.

In 2013, Cameron donated the DEEPSEA CHALLENGER to WHOI, and began a collaborative partnership to stimulate advances in ocean science and technology. Over the last year, the Cameron and WHOI teams have worked together to transfer the DEEPSEA CHALLENGER engineering innovations into the hands and minds of WHOI engineers as they develop future research platforms and deep-sea expeditions. WHOI scientists and engineers collaborated with the Cameron engineering team to conduct a full system survey, completely disassembling and reassembling the vehicle, and to document and detail the design approach to the vehicle’s subsystems. WHOI engineers presented their summary findings to the ocean engineering community and are in the process of distilling the information to post executive summaries with drawings and diagrams on the WHOI DEEPSEA CHALLENGER public website.

The sub has been seen on display at WHOI by thousands of visitors, who have been inspired by James Cameron’s history-making achievement. The feature film, “DEEPSEA CHALLENGER 3D” brings the story of Cameron’s expedition to the deepest part of the ocean to the big screen. Deeper than Mt. Everest is tall, traveling to the Challenger Deep is fraught with engineering challenges and life threatening risks. The film chronicles how Cameron, curious even as a young boy about the mysterious of the ocean, was inspired to explore the deep unknown and invent the solo submersible that would get him there.

“DEEPSEA CHALLENGE 3D” will be theatrically distributed nationwide on Friday, August 8th. The sub's trip to New York City was sponsored by Rolex. DEEPSEA CHALLENGER will return to its home in Woods Hole later this week.

The Woods Hole Oceanographic Institution is a private, non-profit organization on Cape Cod, Mass., dedicated to marine research, engineering, and higher education. Established in 1930 on a recommendation from the National Academy of Sciences, its primary mission is to understand the ocean and its interaction with the Earth as a whole, and to communicate a basic understanding of the ocean's role in the changing global environment. For more information, please visit www.whoi.edu.

Subsea Community Travels Back in Time to

Scientists Film a Giant Squid in the Gul