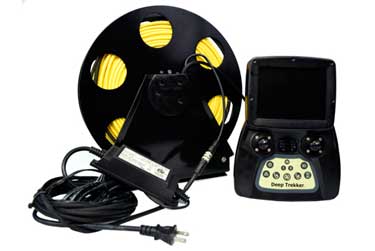 Deep Trekker Inc., the world’s only manufacturer of completely portable remotely operated vehicles (ROVs) has announced the launch of a new hybrid-power ROV system. The system provides optional unlimited deployment capabilities. Users now have the option of operation and charging the internal batteries while the system is plugged in. The ROV can also be switched to its on-board batteries for up to 8 hours of deployment at any time.

With Deep Trekker’s internal batteries, ROV pilots around the world have benefited from being able to launch the entire system in the most remote areas from one carrying case with no generator or additional top-side gear. The internal batteries provide 6 – 8 hours of operation with a 1.5 hour re-charge time, more than enough power for the majority of tasks in underwater work.

Challenging circumstances in environmental monitoring, salvage, and recovery projects often require a Deep Trekker ROV to be in operation for more than 8 continuous hours at a time. For these specific tasks, Deep Trekker now offers a hybrid-power ROV, providing a continuous charge to the ROV’s on-board batteries.

Go completely portable or plug in for indefinite operation

This new system will still use a lightweight 5 mm tether similar to that on Deep Trekker’s battery operated ROV designed to send power to the batteries. A simple charging cord, resembling a laptop charger connects to the tether reel. Thus Deep Trekker ROVs can operate indefinitely while plugged in.

“We strive for the most robust and easy to use subsea systems, we have batteries inside our ROVs so anyone, anywhere can inspect underwater.” commented Sam Macdonald, Deep Trekker President. “Now, with this added option to provide continuous power, anyone can have the best of both worlds to extend their operations and deploy in less than 30 seconds.”

Extend your inspection time and deploy in less than 30 seconds

Traditional ROVs are designed to be deployed using top-side power. Although this allows for unlimited mission times, the industry sought out a compact solution for immediate deployment. This gap in the market has been filled by Deep Trekker ROVs; with self-contained batteries, a handheld control system, and one carrying case.

The proven DTG2 design has been adopted in more than 70 countries around the world in industries such as military, police, infrastructure inspection, tank inspection, environmental research, and aquaculture. The new hybrid-power ROV will bring all of the proven robust and capable features of the DTG2 ROVs, such as its die-cast aluminum frame and 330° field of view camera, to a larger marketplace which is demanding longer mission capabilities.