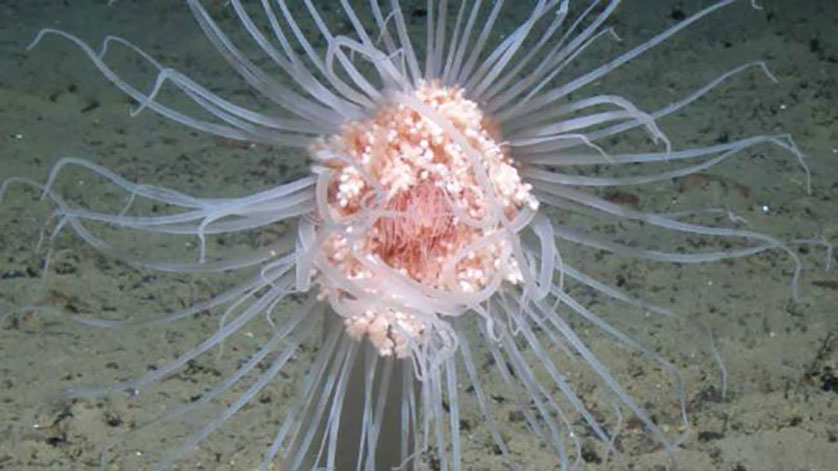 New research from Heriot-Watt, published on open-access journal Elementa, shows that food supply to some areas of the Earth’s deep oceans will decline by up to half by 2100.

Dr Andrew Sweetman, associate professor at the Lyell Centre for Earth and Marine Science, and colleagues from 20 of the world’s leading oceanographic research centers have used earth system models and projected climate change scenarios, developed for the Intergovernmental Panel on Climate Change (IPCC), to quantify impending changes to deep oceans.

The team looked at a number of sea and ocean beds, from the Arctic to Antarctic Oceans, focusing on bathyal (200-3000m) and abyssal (3000-6000m) depths. As well as measuring how the deep oceans’ food sources will decline, the team examined the impact that increased seabed temperatures, declining oxygen levels and increasingly acidic seawater will have, under the sea and across the planet.

Sweetman, associate professor at Heriot-Watt’s Lyell Centre for Earth and Marine Science and Technology, said: “The rate of change underway in our oceans is faster than at any point we know of in geological history.

“Deep seafloor ecosystems provide services that are vitally important to the entire ocean and biosphere; we should all be concerned at what’s happening on our ocean floors.”

Most of the deep sea currently experiences a severe lack of food, but according to Dr. Sweetman and his research team, it is about to face a famine.

Sweetman continued: “Abyssal ocean environments, which are over 3000m deep, are some of the most food-deprived regions on the planet.

“These habitats currently rely on less carbon per m2 each year than is present in a single sugar cube.

“We’ve shown that large areas of the abyss will have this tiny amount of food halved by 2100. For a habitat that covers half the earth, the impacts of this will be enormous.”

The researchers also describe an imminent, significant temperature increase that will happen in the deepest parts of the ocean.

Dr. Andrew Thurber, co-author of the study and a professor at Oregon State University (USA) said: “Deep-sea ecosystems are not just going to experience a reduction in food, but will likely also experience an increase in ocean temperature of 1°C within 85 years.”

“This is very worrying because increasing temperature will increase the metabolism of animals and microbes that live in the sediment, meaning they will require more food at a time when much less is available.”

Dr Lisa Levin, co-author and professor at Scripps Institution of Oceanography UC San Diego in La Jolla (USA), said: “Because many deep-sea environments are naturally very stable in terms of environmental conditions, even slight changes in temperature, oxygen, food supply, and pH are likely to significantly lower the resilience of deep-sea communities to the impact of human activity.

“These many challenges call for intensified observations of and spatial planning for the deep ocean, coordinated at an international level.”

Heriot-Watt University’s chief scientist, Professor John Underhill, said: “Andrew and his colleagues’ research has produced a timely reminder of the impacts of the world’s changing climate on ecosystems living on the ocean floor.

“Their work showcases the quality, depth and breadth of research being undertaken into understanding the deep oceans at Heriot-Watt in the Lyell Centre for Earth and Marine Science & Technology”

Dr. Sweetman led a team of researchers from 20 oceanographic research institutes based in seven countries in the research project. To read the paper in full, click here.