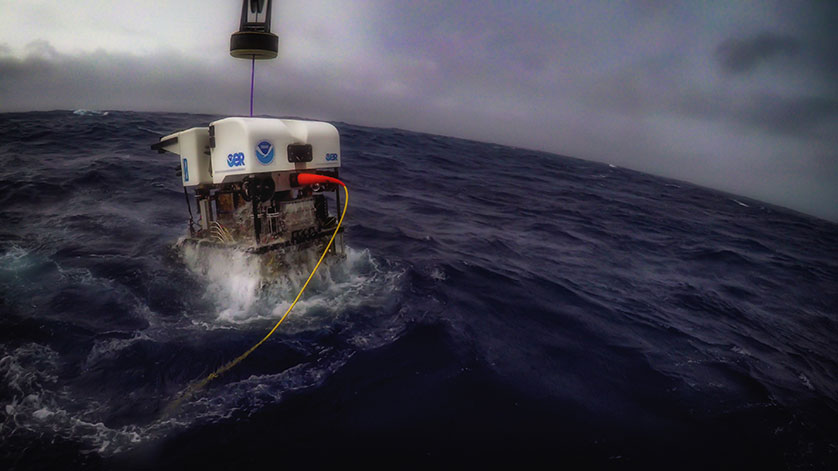 Exploring the ocean depths is no easy feat, but engineers and videographers at the Global Foundation for Ocean Exploration (GFOE) are used to working in extreme environments. The GFOE has announced that it has undertaken its first cruise of 2017, which set sail Feb. 16-, and runs through March 2.

In support of the National Oceanic & Atmospheric Administration’s (NOAA) American Samoa seamounts expedition, this cruise kicks off the third and final year of NOAA’s exploration of U.S. Central Pacific waters.

On board the NOAA Ship Okeanos Explorer, GFOE’s team of 15 highly talented engineers and videographers are helping to investigate and document the diversity of these deep water environments. They are operating NOAA’s 4.5-ton Remotely Operated Vehicle (ROV) Deep Discoverer (D2), which was designed and built by GFOE engineers. The ROV works in tandem with its robot partner, Seirios, to collect scientific data and display a high-definition view of the ocean floor in depths up to 6,000 meters.

“Our team is looking forward to making new discoveries in the waters off American Samoa,” said Dave Lovalvo, Founder, President and CEO of GFOE. “We’ve engineered the robot’s capabilities to provide scientists with unprecedented high quality imagery and data, and this gives us valuable insight into complex underwater ecosystems.”

Commencing in Pago Pago, American Samoa, the cruise will end in Apia, Samoa. Throughout the expedition, GFOE’s multidisciplinary team – both on board the ship and on shore – will conduct ROV explorations of the geological, biological, and archaeological features of the area.

Throughout the cruise, telepresence technology allows the data and images collected at sea to be seen in real time by members of the media, scientists, students and the public via GFOE’s website

This American Samoa expedition is part of a three-year Campaign NOAA has undertaken to address Pacific monument Science, Technology, and Ocean Needs (CAPSTONE), which allows for a better understanding of our National Marine Monuments and other protected areas in the Pacific. It further enables GFOE and NOAA to highlight the uniqueness and importance of these national symbols, and help the public to appreciate the value of these special places.

This cruise will be followed by another expedition from March 7- 29, 2017, where GFOE and NOAA will explore the Phoenix Islands Protected Area, one of the most pristine underwater environments on the planet. Visit our website for a complete schedule of GFOE’s 2017 expeditions.

For video and still images of the cruise, click here.

About the Global Foundation for Ocean Exploration (GFOE)

GFOE is a non-profit organization with headquarters in Mystic, CT that operates worldwide to help scientists, governments and Non-Government Organizations (NGOs) better understand and visualize the earth’s least accessible environments. The organization is committed to empowering the global underwater science community with the tools and expertise required to explore the depths of the planet’s largest and deepest bodies of water.