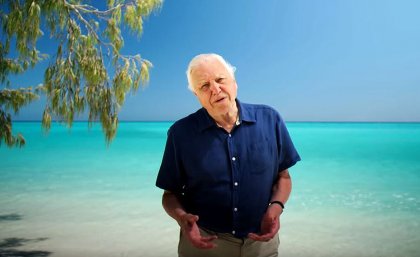 University of Queensland scientific research on the Great Barrier Reef is in the international spotlight with the launch of an interactive website to complement a BBC television series that was released on 30 December.

Sir David Attenborough, as he appears while introducing the interactive website

The site focuses on four Great Barrier Reef locations, including the UQ Heron Island Research Station near Gladstone, and Lady Elliot Island, the locations of UQ’s Project Manta, funded by the Australian Research Council and industry.

“Our staff were excited to have the team on site, to watch them set up shots, and to take Sir David to various locations. He’s a remarkable person.”

Mr. Potts said it was a privilege to work at the station, with its fully equipped scientific laboratories only 20m from the beach, and to know that scientific information collected there was playing an important role in policy development.

UQ Global Change Institute director Ove Hoegh-Guldberg, who was interviewed for the series, said researchers had created a little part of the Great Barrier Reef in experimental tanks at the Heron Island Research Station.

By subjecting coral to different conditions, marine scientists were able to closely model the effects of climate change.

“If we act on ocean warming and acidification and climate change in general, we’ll still have some of the corals left,” Professor Hoegh-Guldberg said.

“As we stabilize conditions on the planet, we will get the Great Barrier Reef re-growing.

“I think that’s really important – that it’s not all over. We still have time to act, and it’s worth acting.”

Professor Gregg Webb of the UQ School of Earth Sciences also features in the series.

Professor Webb is co-leader of an international team recovering high quality core samples from One Tree Reef in the southern Great Barrier Reef, with the purpose-built UQ research vessel, the RV D. Hill.

Dr. Townsend, Professor Mike Bennett of School of Biomedical Sciences and other Project Manta researchers will have an ongoing reminder of Sir David.

The UK team filmed a manta – of a species they had not seen before – in amorous mode, and the researchers subsequently dubbed it “Attenborough”.

“Sir David was quite chuffed to have a manta ray named after him,” Dr. Townsend said.