CSA Ocean Sciences Inc. joins with multiple agencies and universities in receiving a second award for the team’s successful partnership on the Deepwater Canyons project. 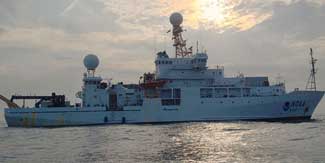 The Bureau of Ocean Energy Management (BOEM), National Oceanic and Atmospheric Administration (NOAA), and the U.S. Geological Survey (USGS) announced that the National Oceanographic Partnership Program (NOPP) will present the 2015 Excellence in Partnering Award to a team, managed by CSA Ocean Sciences Inc. (CSA), that participated in the Atlantic Canyons: Pathways to the Abyss project. The ceremony will take place on Tuesday, February 23, during the Ocean Sciences 2016 in New Orleans.

In its announcement, NOPP stated: “This accolade is presented annually to the research team that best demonstrates the partnership objectives of the NOPP, recognizing the project’s commitment to partnering, the success of the partnership effort, and the impact of the partnership on knowledge and stewardship of our ocean.” This was second award received by the team, an unprecedented achievement in the 19-year history of the NOPP. The project’s work is the subject of a 23-minute HD video on the project that is available here.

“On behalf of CSA, we are extremely honored to be a part of the team receiving this award. The objectives of this contract were ambitious, but we were able to fulfill all the goals of the project,” said Steve Viada, Senior Scientist at CSA.

CSA provides mission critical support to complex offshore operations for both private sector and governmental agencies around the global. As the project’s prime contractor, CSA managed the team through several years of field research and subsequent analysis and reporting. The team included staff from BOEM, USGS, NOAA’s Office of Ocean Exploration and Research, and a dozen universities and research institutions. A CSA Senior Scientist also served as Co-Chief Scientist on multiple segments of the program’s research cruises.

Additional information regarding the Atlantic Canyons program and the research cruises is available here.