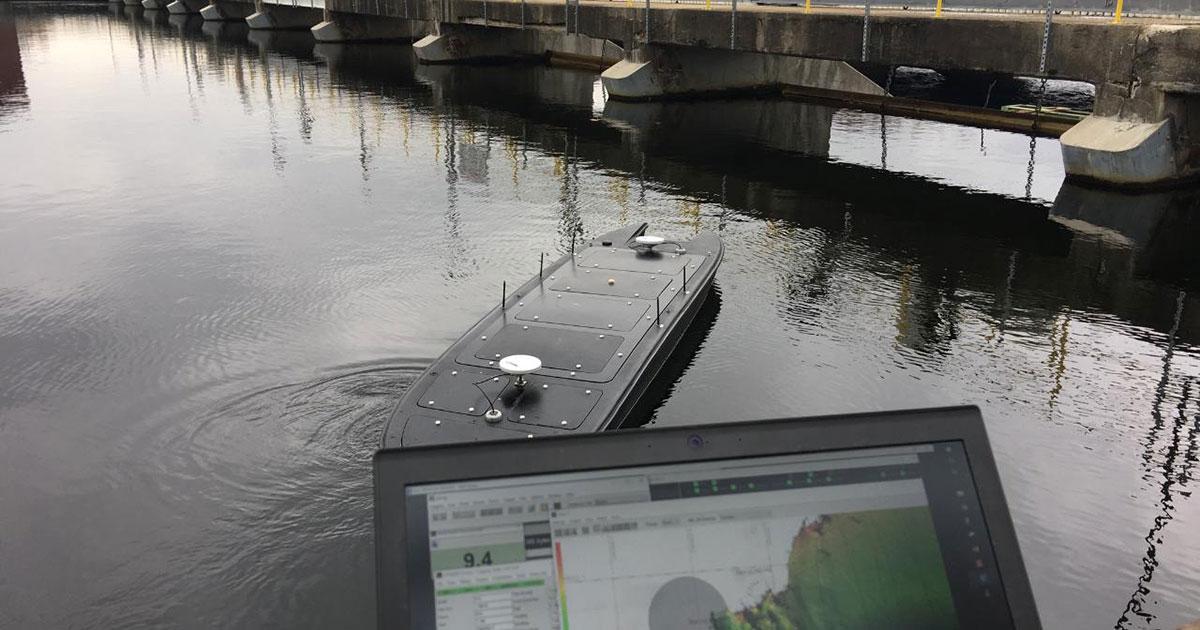 The world’s rivers feed our oceans, and sadly, carry a great deal of pollution that stresses the ocean environment. Dams are an essential element in controlling river waters that eventually make their way to the oceans. The January 2019 failure of a Brazilian iron-ore mining company dam flooded the town of Brumadinho. Several hundred people died in this event. But what was lost in most of the breathless reporting of this tragedy was how better inspections of dams like this one could avert such failures.

Lest anyone think the Brumadinho disaster was a unique event, the potential for more dam failures is extraordinarily high. Failing infrastructure is an issue for most countries, and likely more so in developed nations that still depend on infrastructure that is centuries old. Most nations have systems in place to evaluate bridges, roads, dams, railways and other important components that are part of our daily lives. In the United States, the nation’s civil engineers provide an assessment of the nation’s sixteen infrastructure categories using an A-to-F report format. The latest report card assigned a D+ grade to the sixteen U.S. infrastructure categories.

Among these sixteen categories, America’s ninety thousand dams fared worse than most, attaining an overall grade of D. The condition of dams gets a great deal of attention – and it should. While a road buckling or a bridge collapsing might injure or even kill people, a dam failing could suddenly flood entire communities, potentially causing scores or even hundreds of deaths and untold financial loss, and potentially carrying pollutants to the oceans.

Decades ago, dams were built with the accepted engineering and construction standards of the day, not the more-exacting – and safer – design criteria used today. But while the desire is there to assess the condition of a dam, how to do this is much more challenging. A dam must first be inspected to determine its state. But a major impediment doing so – let alone deciding what shoring up or repairing is needed – is the inability to inspect the underwater portion of the dam.

Today, the most common practice of inspecting a dam uses some combination of manned surface vehicles, ROVs and divers. But this method of surveying is slow, expensive, hazardous, and often results in only a partial inspection report. The danger of using humans to survey the underwater portion of dams is not well-understood. A great many dams have severe turbulence near the dam face, and this presents an unacceptable hazard to most manned surface vehicles, ROVs and divers.

It is not difficult to see why dam operators often fail to properly inspect their dams – the risks of doing so are just too great. Fortunately, emerging technologies such as COTS unmanned surface vehicles equipped with tested and proven echo-sounders and sonars now offer the potential to conduct these inspections, and do so without putting people in harm’s way. But this aspiration is only that – a wish – until it is proven by a demonstration.

Such a demonstration did occur when a low cost, COTS unmanned surface vehicle equipped with a high-resolution multi-beam imaging echo-sounder sonar was used to conduct a comprehensive inspection and survey of the Keokuk Dam on the Mississippi River. The objective was to map underwater structures with an unmanned surface vehicle, followed by the USV performing the survey of the upstream and downstream sections of the dam. The deliverable was a comprehensive hydrographic survey, which further evolved into a complete high-resolution bathymetric map and inspection report necessary to meet the requirements of the safety group responsible for certifying this dam. 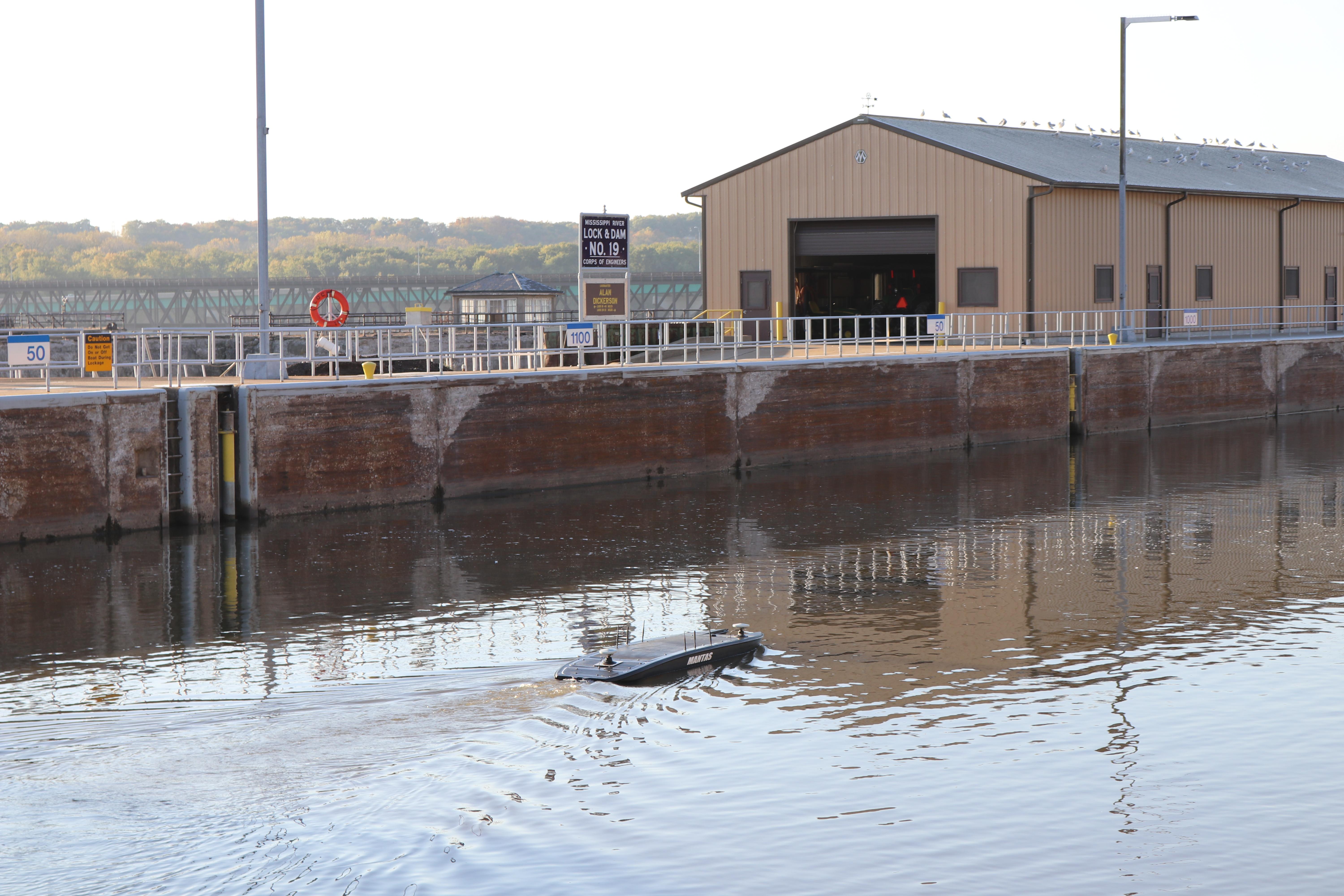 Using COTS technology to conduct bathymetric dam imaging is a solution that can save lives in two ways – not putting people at risk inspecting these structures, and as well as not hazarding those who live in areas threatened by a dam collapse

Inspecting and surveying the Keokuk Dam/Energy Plant presented a huge challenge. This rapid water flow through the dam caused extreme turbulence and treacherous eddies. Due to strict safety regulations prohibiting manned surface vessels from operating within 200 meters of the dam front. Nor could these vessels operate safely near the powerhouse inlets due to extremely high intake currents. An alternative, unmanned solution was sought.

The Keokuk Dam owner, Ameren Missouri, contracted with a Florida unmanned surface vehicle manufacturer, Maritime Tactical Systems (MARTAC) Inc., to conduct comprehensive bathymetric imaging of the dam. Ameren Missouri selected a twelve-foot, catamaran-hull, MANTAS USV for this task. The MANTAS was outfitted with a COTS multi-beam echo-sounder and sonar and was controlled by an operator via a tablet.

The USV solution performed as expected with excellent resolution, and in a fraction of the time a similar effort using manned surface vessels, ROVs and divers could achieve. The final survey completed in a day-and-a-half, and provided Ameren Missouri with a comprehensive picture of the condition of the Keokuk Dam. Based on the results of the Keokuk Dam hydrographic survey, additional proof of concepts were requested and demonstrated. This best-practices example can readily be extrapolated to inspect additional dams in the United States as well as in other nations.

The tragedy in the Brazilian town of Brumadinho caused by the mining company dam failure was not an isolated incident. In 2018 there were dam failures in Afghanistan, Kenya, Laos and Myanmar. Over one hundred people needlessly lost their lives in these incidents, and effluent from these failures did what it always does – flowed downstream toward our oceans. More recently, in October 2019, a dam collapse in Siberia killed fifteen people. And importantly, the preventable nature of these accidents has resulted in fines, firings and court cases against those who could have prevented these tragedies. And while ignoring hazards has been a factor in some dam failures, often it is the lack of a safe method to properly inspect the dams in question that ultimately results in tragedy.

It is clear that the stakes of dam collapse are high and that, due to recent failures, there is renewed interest in ensuring that dams are safe and secure. Using COTS technology to conduct bathymetric dam imaging is a solution that can save lives in two ways – not putting people at risk inspecting these structures, and as well as not hazarding those who live in areas threatened by a dam collapse. All communities and nations with aging dams would be well-served to study the results of the U.S. Keokuk Dam survey as a best-practices example and avert dam failures through thorough inspections.

By George Galdorisi, Director of Strategic Assessments and Technical Futures at the U.S. Navy’s Command and Control Center of Excellence

Putting the Pieces Together: Using Resea

Millions of Sharks to Surface Among the