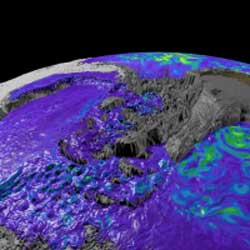 A remarkably detailed animation of the movement of the densest and coldest water in the world around Antarctica has been produced using data generated on Australia’s most powerful supercomputer, Raijin.

So much data was used, that it took seven hours to process just one second of the animation.

The visualization has revealed underwater ocean storms generated by eddies, waterfalls of cold dense water that plummet two kilometers off the Antarctic Continental Shelf into the abyss and underwater waves hundreds of meters high.

“Scientists who have seen the visualization have been astonished at the level of detail,” said Associate Prof Dr. Andy Hogg.

“But this visualization is about more than communicating the wonder of science to the public. Being able to actually see how the bottom water moves in three dimensions rather than just looking at numerical, two dimensional outputs has already opened new areas for scientific research.”

This latest animation peels back much of the surface layer of the ocean to explore how the cold dense water produced on the Antarctic continental shelf spreads out into every ocean basin in the world.

The movement of this dense water is vital. It is the most oxygenated water in the deep ocean and its extreme density and coldness drive many of the significant currents in the major ocean basins connected to the Southern Ocean.

The distinctly different densities of water that move around Antarctica also make it important in regards to climate change. Because the most dense water forms near the surface, close to Antarctica before descending to the ocean floor, any warming that occurs near the surface can be drawn down into the deep ocean.

Importantly, this drives more heat and more carbon into the deep ocean that would otherwise have returned to the atmosphere.

“The inhospitable climate of Antarctica and the lack of sustained observations of the ocean in this region over a significant period of time adds to the importance of using ocean models to create visualizations like these,” Dr. Hogg said.

“It helps us understand what is happening in locations that are difficult to observe and may explain why Antarctic bottom water is disappearing, becoming less saline and warmer. It may give us important insights into a future under climate change.”